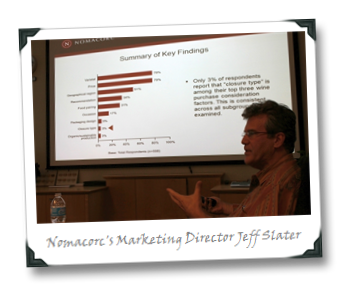 “That was an interesting concept for me,” Jeff Slater, Nomacorc’s Marketing Director, told us as he presented research findings on alternative wine closures; “winemaking continuing after bottling.”

A few weeks ago, I and a small cadre of wine press toured Nomacorc’s Zebulon, North Carolina manufacturing facility as media guests, meeting with their upper brass and donning lab coats to see how their synthetic wine closures – the only ones in the business to offer specific oxygen transfer rates – are made.

And Slater (who has his own –  quite engaging – personal blog, by the way), had gotten me thinking with that comment. When does a winemaker’s job end? If you believe Nomacorc, that job – at least when it comes to any particular wine release – doesn’t stop when the bottle gets sealed.

Nomacorc might not be a household wine geek name, but in terms of numbers the odds are good that you’ve had your corkscrew in at least one of their products at some point. As of 2011, Nomacorc had around 70% of the synthetic cork market, and were the second-largest closure manufacturer in the world, topping off 13% of all still wines globally by market share. Thanks to deals with mega-producers Kendall-Jackson, Cupcake and Barefoot, nine out of every ten Chardonnay bottles in the U.S. are stopped with a Nomacorc closure.

Put another way, recycling has become a major concern and big priority for Nomacorc (according to CEO Lars von Kantzow), because they produce two billion (yes, with a “b”) closures per year: 1 in 5 of every wine in France, 1 in 4 for Germany, 1 in 3 for the U.S., by volume. They’ve churned out something like two corks for every human on Earth since they entered the market in 1999, when their founder, Belgian Gert Noel, got fed up with having one too many corked wines and worked with his son to develop an alternative.

So, yeah, you’ve seen one of these closures. And chances are good that you’ve not thought much about them, either. As Slater put it when he summarized a 2011 Merrill Research survey of about 600 wine consumers: “it’s like the laces in your shoes; you don’t think about it unless it breaks”… 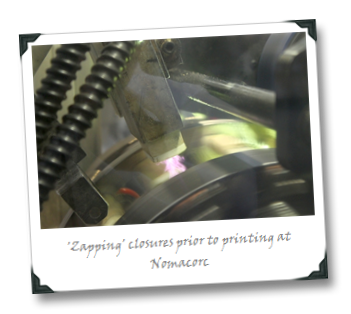 Part of the marketing spiel for Nomacorc is that natural cork is a technology from the 14th Century, and long overdue for an upgrade. They estimate that close to one million bottles closed with natural cork are infected with cork taint per day on average. But I didn’t get any sense of Us-Against-Them in terms of pitting synthetic closures against natural cork when I visited Nomacorc. Instead, I got the sense that they view Oxygen as a wine’s worst potential enemy.

Actually, better put, the right amount of O2 is a wine’s best friend, creating that special beverage we find so beguiling in the brief time that it can exist between the stages of grape juice and vinegar. Finding that balance is all about oxygen management, and Nomacorc is effectively hanging their hats on that oxygen management. It’s not only the focus of their closures (the models of which specifically target different transfer rates for wines meant to age for different periods of time in bottle), but also of their NomaSense product: a self-described “quasi-consulting service” that helps measure and control oxygen exposure throughout the winemaking process – including inside the bottle. As Technical Sales Manager Wes Ward told us when showing us how to measure the O2 inside a sample bottle that contained a NomaSense sensor, “8.6 ppm is the magic number,” the saturation point (but not the detection threshold, which could be lower) at which point a wine is considered oxidized. 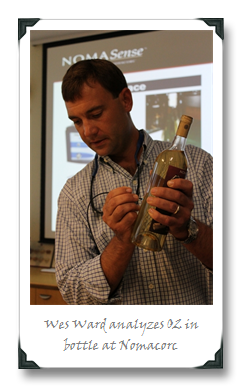 In terms of the Nomacorc closures, I’m convinced that they do what they say they do ‘on the label’ (though the jury is still out on whether or not they can handle very long term – I’m talking 20+ years – of bottle aging). During the visit, we tasted through a series of two wines – Chateau Mongin’s Cotes du Rhone Villages, and Nyakas’ Budai Sauvignon Blanc from Hungary – that Nomacorc claimed were bottled from the same sources on the same day, with the only difference being the model of Nomacorc closure used. The results, in terms of the color and the perception of oxidative versus fruity characteristics in both wines between the three different closure models used, was dramatic. The fact that you can control those aspects through O2 transfer rates guaranteed by a closure is something that I think a lot of wine producers ought to find compelling, especially if you’ve got wines that aren’t meant for long-term aging (where the risk is therefore a bit lower until Nomacorc closures have more time on the market to prove themselves in higher-end wines).

[ I should also note here that these are NOT the dreaded ‘plastic-plug’ closures that attach themselves to your corkscrew with extreme prejudice, like the spider-looking face-grabbing egg-layer Alien thing. Nomacorc closures have a lining and an inner foam core that is very easy to extract in my experience (and to get off of the corkscrew thread when you’re done). The also feel a bit more like real cork, but with more of a plastic texture to them. The products are well-made, the company seems well-run, and the NC manufacturing operation is top-notch (I have at least a semi-educated view about this, having worked for one of the world’s largest CPG companies). ] 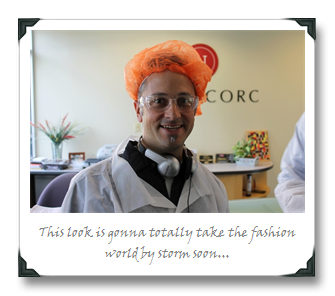 The suggestion that a winemaker’s job doesn’t end at bottling also implies that, given that they have control over the closure choice, and accepting that the closure choice is an important part of the equation of getting wine to a consumer, they actually have an obligation to extend the job past the point where the juice is sealed into the glass. I personally (as a consumer at heart!), find that compelling, too. Whether it’s screwcap, Nomacorc, or cork, I want the wine to taste good when I get it, and not to fall apart in bottle because too much oxygen got to it before, during or after the closure process.

But aside from getting a wine that doesn’t smell like vinegar, will consumers find it compelling? Do they even care about the closure at all? Back to that 2011 Merrill study:

According to Merrill Research, 50% of respondents experienced some type of problem with natural cork closures (breaking and/or experiencing difficulty in removing them), but only 3% of them identified closure type as a key decision factor when purchasing a wine. Which suggests that they don’t give a crap about closures unless they have a problem with them. 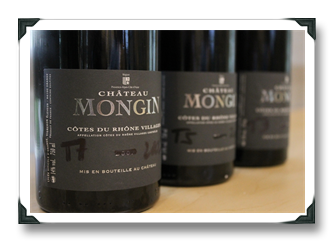 But the waters of closure perception aren’t anywhere close to being clear. The same Merrill study also suggests that consumers aren’t quite ready to give up the spongy pop of natural cork just yet: 87% of the respondents noted that they would still buy their favorite wine if it switched over to synthetic closure, which sounds good until you realize that result also could mean that you might see a 13% drop in sales if you switch to synthetic. And the findings that people don’t care about closures conflicts with a recent Tragon Corp. study in which it was found that closure type was “more important than price, wine type or region” for consumers when making a wine buying decision for bottles $15 and up.

How can surveys of wine consumers turn up such contradictory results? The contradictions make more sense when you consider who commissioned the studies (not that you probably haven’t already guessed): Nomacorc for Merrill’s, and the cork industry for Tragon’s… 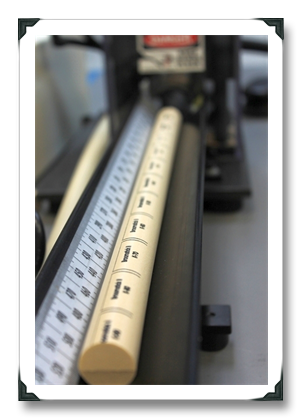 Got a stance on closures? Or whether or not winemakers ought to be held to task for what happens to their vino after the bottle’s been sealed? Shout it out in the comments!

13 thoughts on “When Does A Winemaker’s Job End? (Touring The World’s Leading Synthetic Cork Operation)”