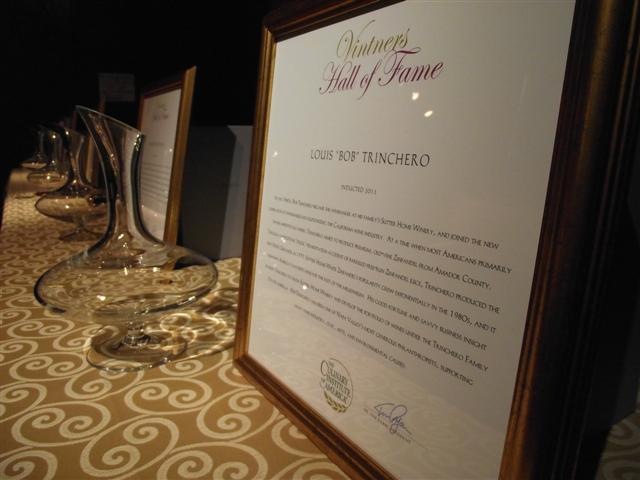 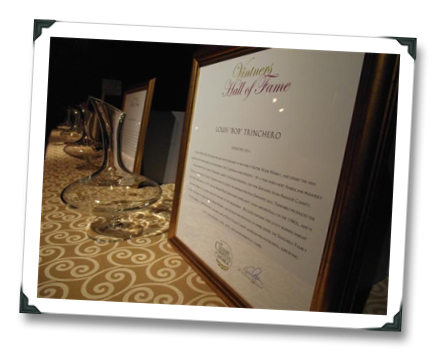 Sounds wincingly, excruciatingly, Hallmark-card-esque cliche and soporific and sentimental, doesn’t it?  And it would be, if it weren’t actually totally accurate and on-point.

One of August Sebastiani’s sons delivered the acceptance speech on behalf of his father (who died in 1980 and was inducted posthumously into the VHF this week). He noted that there seemed to be a common thread that weaved together the current and past VHF inductees: none of them would ever have sought induction as an end in-and-of-itself, because they were too busy doing what the loved most and for which they had an undying passion – making great wine. They didn’t think about accolades, they thought about giving people pleasure through the sometimes scientific, often-times artistic, but almost always luck-reliant act of turning fruit into vino.  To quote the sages 311, the fact that you don’t even know makes it totally legit.

I found another common thread weaving together those VHF inductees (at least, the class of 2011, but I suspect it holds true for the previously inducted classes as well): they engender pride – not in themselves, but from others. Those who introduced the inductees were beaming with pride that was so palpable that it would have been harder to cut than the succulent portions of beef served up by the CIA staff after the ceremony (directed that night by CIA grad and former White House Chef Walter Scheib).  Ravenswood founder Joel Peterson’s son Morgan (himself a gifted winemaker) provided an introduction so touching it nearly had father and son both teary-eyed; it was the kind of speech that showed a sense of pride and admiration nearly every parent dreams of one day receiving from their own children.

Passion and pride – the stuff of which families, and, apparently, entire industries are made.  The kind of stuff that took the simple labors of love of hardworking farmers and turned them into products that can rival the best in the world.

Hackneyed?  Maybe.  Accurate?  In the case of the CA wine industry, most definitely.

And based on those introductory speeches, I think we can forgive the CA wine industry for being a tad self-congratulatory for one evening a year – I for one wouldn’t argue against them deserving it.