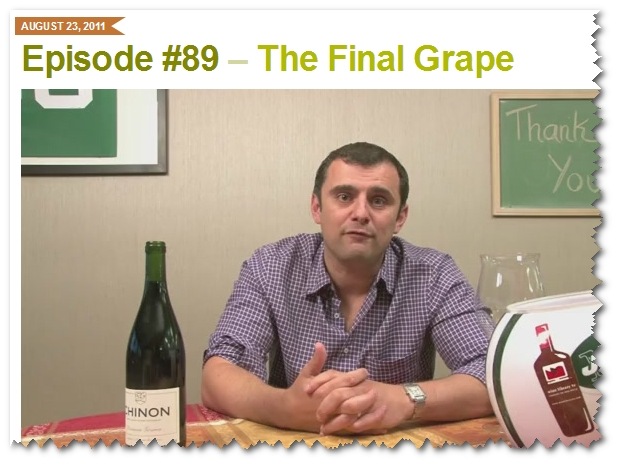 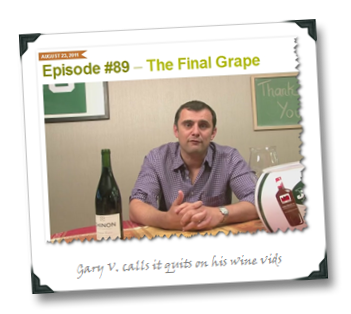 But before we get into those Whats, we need to talk a little bit about Gary’s motivations, so we don’t get caught up in the speculations behind all those “Why?!??” questions – because that, my friends, would out us squarely back into the intellectual equivalent of that thorny jungle from which some of you were recently rescued.  Let’s get these out of they way:

Earlier this year, Gary and I were both speakers (he was the keynote) at an event in Napa, where we got to spend a little bit of time together.  I asked about (what were then) his most recent retirements (Corkd.com and his day-to-day involvement in Wine Library).  Gary’s answers about this stuff are almost always personal.  That doesn’t mean that there aren’t fiscal reasons behind the decisions – there almost certainly are (if Gary and his dad are anything, they are shrewd businessmen); but it does mean that the personal reasons will probably be the foremost in Gary’s mind and will therefore be the stuff that he publicly talks about.

1) Why shut down Corkd.com? Likely Gary didn’t see a strong enough fiscal future in it, but the first thing he mentioned about when I asked him about Corkd’s closure (ha!… get it?  cork… closure!… ok, you’re right, that’s terrible… sorry…) was his family.  As it turns out, Gary had rebellious son’s remorse when it came to Corkd: “Corkd was mine, I got and grew it on my own, without my dad, and I didn’t want him involved in it because it was going to be 100% mine. But then I didn’t feel good about it being successful as a result.”

2) Why move away from Wine Library? It had a lot to do with the thoroughly sh*tty state of affairs in wine shipping and distribution laws in the U.S., actually.  “I got tired of losing sleep over some decision in another state swinging my business by millions of dollars, practically overnight… I just didn’t want to deal with that anymore,” Gary told me when I asked him about splitting from the nitty-gritty of WL.  Obviously, not being as involved in WL leads to not doing WLTV which leads to having more time to launch the venture he shut down last week, Daily Grape.  My view of DG was that it was Gary’s all-in foray into mobile, which is not only the future of content consumption but is actually the present of content consumption. It’s also already a crowded field, and DG wasn’t the first out of the gate – and in the mobile app space, if you’re not first out of the gate when it comes to mobile,then you have a significant uphill battle in gaining ranking and market share for your app.  So DG might not have been an successful as Gary had envisioned (though still successful by most measurements you or I would use- this is entirely speculation on my part, by the way).

3) For you recently-rescued-from-the-jungle folks, Gary has made a successful play into a world much bigger than wine already. He doesn’t need the wine biz, and he will very likely launch something big in the near future in the business consulting space (Vaynermedia has some very high-profile clients with rather deep pockets – if even a small fraction of them have Gary’s business on retainer, then financially-speaking he doesn’t “need” to work another day in his life).  Producing daily content – content that is really good, and resonates with a lot of people – is f*cking hard work; Gary is probably a little burnt out, and when that happens you need to focus on the stuff that interests you and fire’s you up most – for Gary, that stuff isn’t wine reviews.

Ok, here’s the real meat on the discussion bones, I think: Now what?  Now that Gary is gone, what will happen?  Here’s my take – I don’t profess to be Nostradamus on these thoughts, but I consider them at least semi-educated opinions:

1) Some consumers will become less passionate about wine, and that will be bad for the wine biz. I hate to kick off this part on a down note, but I am sad to see Gary go from the wine world because he’s done what nobody before him was able to do – move wine consumers up the pyramid of wine appreciation.   Gary has some ardent fans – and many of them could be more fans of Gary than they are of wine.  Some of those people for whom Gary was their wine-appreciation catalyst will no longer give as much of a crap about wine now that Gary is less publicly visible in the wine sphere, and this might have a small but measurable negative impact on fine wine sales. Hey, stranger shizz has happened (like earthquakes and hurricanes in the East Coast on the same week… just sayin’…).

2) Wine Geeks will have to go somewhere else – but where will they go? I probably stand to gain a bit from Gary’s departure from wine criticism, because those who tuned in to enjoy his nearly daily take on wines and are geeky and passionate about wine generally will still want to consume info. about it and talk about it online.  They will need new places to go to do that.  That doesn’t for one second make me happy that Gary is going, but realistically the serious wine bloggers out there could see a readership bump in the wake of Gary’s semi-retirement.  Look, I’m certainly not gonna turn anybody away from interacting here, and I’ll welcome anyone with open arms… But… well, this is a very different site than DG or WLTV, and while I’m a hyperactive, short, dark-haired East Coast guy, I’m very different from Gary.  I’ve long admired him, but I’ve never intentionally copied Gary and I’ve no plans to start copying Gary now.  I fear that other bloggers might try (and of course fail miserably) to copy Gary in order to try to gain exposure and readers in the wake of his semi-retirement (for lack of a better term) – I feel very sorry for those bloggers already, because it won’t end well.

3) We won’t see wine tasting vids that good again, at least not for a long while. Bottom line is this: while some wine video content out there is pretty damn good, very little of it can touch what Gary was doing especially when it comes to tasting notes done in front of the camera.  Personal note: I do that from time to time, but it’s always with a twist and never in the context of trying to cop Gary’s style, and tasting wines is never the focal point of my vids (and it’s because I need those twists and want those twists to keep it interesting that I produce my vids at a fairly infrequent rate).  I’d love nothing more than to see some charismatic, on-camera dynamo come out of nowhere and kick all our asses with amazing wine review video content, and fill the void that Gary will leave.  But I’m not holding my breath.

Time to get all soppy on ya

On a personal note, while I wasn’t a hardcore fan of Gary’s vids, and certainly not a fan of his questionable taste in NFL franchises (sorry, Gary! :-), I’ve long been an admirer of Gary’s attitude, chops, and inspiring gumption.  Gary has been a supporter of 1WD over the years, and for all that I will be grateful always.  And I will miss having him as a visible figure – and potent, influential voice – in the on-line wine community, because being a long-time business guy myself I can tell you that his combination of knowledge, chops, charisma and willingness to tell it straight is very, very rare indeed.

As always, looking forward to hearing your thoughts – what will the post-Gary V. wine world will look like?

59 thoughts on “The First – And Last – 160 Days: What Does Gary Vaynerchuk’s Exit Mean For The Wine World?”