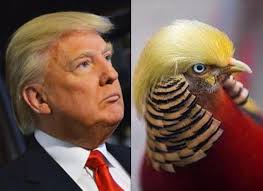 I travel the world. A lot.

For example, I was in Chile when Donald Trump was elected as the 45th President of the United States of America (and yes, I voted by mail before I’d left for the trip).

Since Trump’s election, I’ve traveled to other countries, all for wine-biz-related stuff, and the same question keeps being asked to me by well-meaning but concerned members of the wine biz. The same two questions, actually.

I’m not only unequipped to answer the first question, I don’t think that, if I were, I’d have a decent, coherent explanation anyway (see the attempts by everyone else).

Regarding answering the second, I’ve got some good news/bad news for you. This is what I’ve been answering to everyone posing that second question to date:

Since that seems a little (too) brief, I feel compelled to go into the details. But trust me, they won’t get us much further along the path to a viable answer…

Here’s the thing about Trump’s rhetoric, and, to some extent, his policies: they are disconcertingly malleable. That means that his presidency will be, at least somewhat and certainly more than any other presidency in modern times, unpredictable.

We have important clues from Trump’s behavior during November 2016, after election day, however, that I think bolster the notion that very little will actually change in terms of the impacts on the wine business in the U.S. (and the country’s place as the world’s largest wine consumer).

The shorthand version of all of the news coverage of his actions in that time frame – actually, in all of 2016 – is that Trump is all blustery talk, and probably not much blustery action. To wit:

He does not appear to be an agent of change in the areas where it counts most: his actions.

Trump is no different than any other politician. He is absolutely as full of bullsh*t and fake promises as any other person who has ever run for political office anywhere else.

That’s why I do not expect any massive changes for the U.S. wine business during a Trump presidency. Actually, I wouldn’t expect them with any President, given how slowly their agendas are able to progress through the U.S. Congress. And yes, I mean that, despite Trump’s bluster on immigration (would you want to be the Congress that is remembered as the one that destroyed the U.S. produce business because of your hard-line immigration stance?); despite his rhetoric on making things easier for businesses (if anything, that will be a negative impact for the environment, not an open invite for mass consolidation, because who in Congress would want to be remembered as part of the group that squashed small business progress, including smaller import and distribution and sales companies?).

When you combine Trump’s mostly-talk stances with Congress’ terrible approval ratings, you don’t have a recipe for sweeping, massive changes.

Now, we could legitimately debate the impacts of a Trump presidency on many other aspects of our lives, but I’m not going to do that here. When it comes strictly to the wine biz, I think that the seat belt lights have been illuminated, and we need to sit down and buckle up for a bumpy ride; but the pilot isn’t radioing in mayday, and the oxygen masks aren’t dropping from the ceiling just yet, folks.