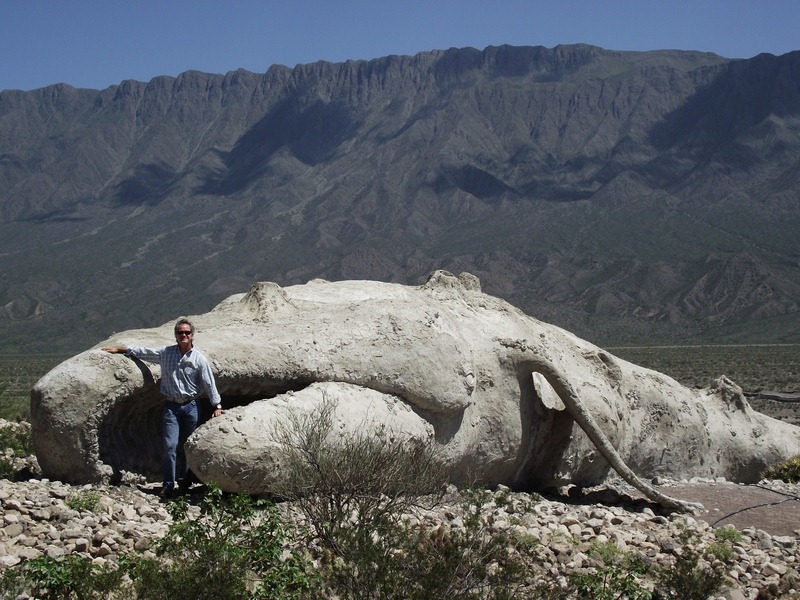 Travel to the province of San Juan, in the Cuyo region of the Tulúm Valley in Argentina – past the shitty old cars routinely running red lights, past the modest houses that are little more than shacks with water tanks atop, past the dogs whose limps attest to how rough life here can get, past the motor bikes unsafely carrying four people simultaneously, past the more-bucolic-but-still-trash-laden parks with statuary odes to cycling (a favorite pastime in these parts) – and you will find, nestled among the starkly gorgeous landscape of the surrounding mountains…

Yes, seriously.  A whale.  A life-size reproduction of a whale, that is, constructed by artist Adrian Villar Rojas as a tribute to the site upon which it sits – now upwards of 800 meters above sea level, but which used to be a submerged seabed in ancient times. If that’s not odd enough for you, you’ll also find llamas and some miniature ostrich.  Along with the main attractions of the spot: olive oil, and some pretty good wine being made from Syrah. Yes, Syrah.  Yes, in Argentina. The whale (you’re probably still thinking about the whale, right?) was commissioned by Ezequiel Eskenazi, the down-to-earth, animal-loving, olive-oil-producing owner of the site and the founder of XumeK.  As Ezequiel puts it, he is, in some ways, just a guy trying to find an interesting way of spending some of his father’s money (a fortune made in the caning business during the the budding days of the Napa, CA wine industry):

“I don’t have a romantic story, but I always had a dream to build a vineyard.”…

XumeK’s stunning location – part farm, part mountaintop retreat and future art exhibition (a large lioness statue is planned to overlook the future buildings on the property, and to mark the site’s best Malbec plantings, and I suppose to give the poor lonely whale a bit of company), part wine and olive oil businesses – is about as far removed from the “wine lifestyle” concept as one can reasonably get.  That is, it seems that way until you actually get there, after which the site seems an inevitable oasis amid the rough-around-the-edges life of San Juan.

“We got lucky” Ezequiel told me about the choice of site for planting grapes.  “The kind of luck Napolean said he needed for his generals.  We went into the market with nothing.”  After selling grapes to Catena Zapata and Zuccardi, winemaking under their own label started in 2002 with Malbec and Syrah, and Ezequiel was encouraged by the results.  “The color was incredible; [the wines were] incredibly fruity and fresh.  Syrah is like the emblematic grape of San Juan.” XumeK was basically founded on virgin fine-wine territory, but the CA wine reports that Ezequiel’s father relayed to him from his American business trips was in a large part responsible for the consummation of the site: “I saw weather and soil here that reminded me of California,” he told me.  In 1997, Ezequiel spent twelve months looking for the right location for a vineyard, and “fell in love with this spot immediately; it was totally intuitive.”

At the time, table grape vineyards surrounded the spot, but it wasn’t clear if fine wine could be made here, so consultants were brought in from Chile, California and France, who all agreed the location had potential.  “Potential for a unique terroir,” Ezequiel noted. Terroir among the whales, limping dogs, ailing cars and avid cyclists?  I suppose stranger thing have happened.

The San Juan area is not without its charms and beauty, but you have to look hard for them amid the more prevalent signs of rough-living here.  The hard life of San Juan certainly bleeds over into XumeK’s oasis, bringing with it some unique viticultural challenges: irrigation is possible only via a supply of underground water that is expensive to pump to the surface; the vineyards are planted at elevations as high as 1500 meters on stony soils that are difficult to work; the hot sun and strong, warm sonda wind require netting and bamboo mulch to protect the most vulnerable vines from the heat; rains are infrequent in the extreme, and when they do come they produce short-lived rivers with currents so powerfully swift that they can toss small boulders “as if they were nothing.”

Oh, yeah – and the nearby mountain peaks are said to attract UFOs (though no one at XumeK has had any close encounters… yet). Ezequiel’s father’s CA business trips in the `60s and `70s also formed the basis of his inspiration for the quality level that he was aiming for wine from XumeK’s site.  Minus the time that CA wine was mired in the if-some-oak-is-okay-more-oak-must-be-better phase.  “I feel now the American consumer wants more to taste the fruit, and not the oak,” he told me.  “What I like in wine, is balance.”

Despite the CA influences, the winemaking approach at XumeK includes a decidedly multinational angle: the clones in use here are primarily French, and the vineyard management styles follow a European model.  What comes out of that multicultural mix (made even more cosmopolitan by the addition of a partnership with Paul Hobbs, who acts as consultant) are decidedly New World style wines, and while it’s a bit early to talk about terroir in my opinion, there’s no question that many of the current XumeK releases offer very good value – and successfully marry the concepts of “big” and “balanced.” Rich texture, great mouthfeel, good acidity – it’s got plenty of stuff lacking in domestic U.S. Chardonnay in this price range, and it’s topped off with tropical fruits and nice bit of spice.  Lime and some green grape flavors also show up, and the whole experience is refreshing right on through to the finish.  It basically goes down dangerously smooth, and if you’re not careful you could drink a lot of this at one sitting.

Crayola doesn’t make a color this purple, and the big blue fruits deliver just about what you’d expect from taking a look at the color of this wine in the glass, with the added bonus of some nice mineral notes.  Where it really shines, though, is in the mouthfeel, where it puts on a clinic for the price-point and will very likely ensure a quickly-drained bottle at a BBQ.

Yes, it’s a bit of a bargain even despite the > $20 price-tag.  There’s deep concentration of blue and black fruits, and the hint of violets gives this wine some nice complexity.  The oak spices were a tad overdone for me, but they’re definitely high-quality and not boorish.  It’s a BIG wine, but it has the acid to balance out its heft.  Worth aging for four years to see how all of the components integrate (and at under $30, it won’t totally break the bank to carry out that experiment).  Give them major props for delivering a New World Syrah-based wine that can actually be aged!

8 thoughts on “Whales, Syrah And Intuition: The Making of Argentina’s XumeK5 min read”