There’s an interesting wine invention currently on the market, targeted at the major “wine geeks” out there (I humbly & happily include myself among that target demographic).

The item is called the Clef du Vin and retails for about $100 USD – a relatively expensive wine geek toy, no doubt about it. The device is relatively small and shaped so that it can fit easily into the top of a standard wine glass and be dipped into a fully poured glass of wine. 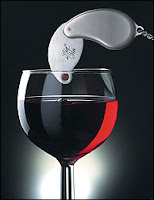 The idea behind this device (pictured) is that it can (supposedly) emulate how a wine will taste after aging – approximately one year of aging (under close-to-ideal conditions) for every second that the device is kept in contact with the juice in your glass. If a device like this worked as advertised, it would be very exciting in the wine geek world and the industry in general, as it would provide a scientific estimate of a wine’s aging potential. The possibilities for this are varied – I suppose it’s not out of the realm of possibility for a device such as the clef du vin to debunk overly-hyped vintages, if not introduce a sea-change in how wine futures and aging potential are evaluated (i.e., moving away from vintages into wine-by-wine evaluations) – hey, stranger things have happened!

The trouble is, the device doesn’t seem to work as advertised. Gary Vaynerchuk of Wine Library TV fame has recently tested the device during one of his on-line video episodes. Gary ueses the device to “age” some wines that he knows well, and puts it to the ultimate test by severely “aging” a non-age-worthy White Zin. You can watch the original episode here.

The verdict – while the device clearly does something to the wine, it does not necessarily paint an accurate aroma / flavor portrait of what that wine might taste like in several years’ time. Alas, we’re going to have to determine that the old-fashioned way: by buying multiple bottles of wines that we like and think have decent aging potential, and then being very… very… very… patient…