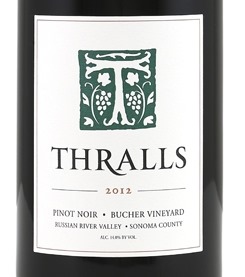 It’s funny (as in “refreshingly interesting,” and not as in “ha-ha, I almost peed my pants!” or “ewww, well… that’s weird) how success in the wine business keeps getting redefined and reinvented. 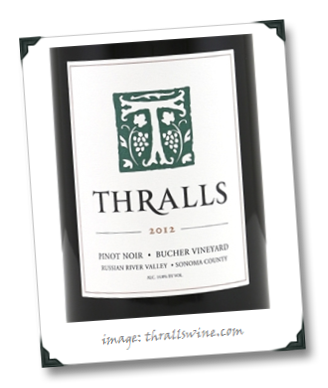 To wit: by now, we shouldn’t be surprised that we’re seeing wine lovers migrate from the online wine world into viable writing and winemaking careers, but for whatever reason the Hardy-Wallace-type stories still seem oddly out of place in the wine biz. Oh, wait, it’s for “whatever” reason; the reason is that the wine world is still woefully behind on understanding that the online world is populated by actual human beings with actual passions, talents, and funding. Okay, whatever.

We can add another online-wine-wonk-to-promising-offline-wine-producer story to that growing lineup: that of Ed Thralls, who recently sent me samples of his personal project, Thralls Family Cellars.

A refugee from the east-coast (Atlanta) financial tech industry, Thralls was blogging and tweeting at the handle @WineTonite for some time, all the while building up real-world wine chops through an internship at Holdredge Wines, a stint in the Viticulture & Enology program at UC-Davis, and completion of the Certified Specialist of Wine qualification.

The result of Ed’s foray into personal wine branding is tiny quantities of Pinot Noir juice crafted from grapes purchased from interesting spots in Northern California, with an eye towards clonal selection, light use of new French oak, dollops of whole cluster and unfiltered processing, and generally trying to get the results under 14% abv. It’s Pinot that is promising – and elegant – enough that Thralls’ efforts probably ought to be considered for a seat at the “cool kids” table of In Pursuit Of Balance (and similar modern temples to the anti-largeness Pinot crowd; hey, I’m not complaining, I dig both styles)…

Now is the point at which I’d love to poke fun at Ed’s penchant for punning the Thralls name in the packaging and presentation of his wine brand, but since I couldn’t resist it either, I’ll just shut up about that and get right to the juice itself:

If it’s earthiness you want, it is earthiness you shall find here, my friends. This juice is about the earthiest – and more mineral-drivern – I’ve yet encountered when it comes to the normally put-yer-big-boy-pants-on style of fruity, boisterous Russian River Valley Pinot. But even with all of that dirt and wet rock, this doesn’t lack for RRV’s penchant for wearing leather clothing. It’s also bright, sweet of fruit, and ends with terse structure into a finish that is way longer than you ought to be rightfully expecting from Pinot under $40 a bottle (you cheapskate!).

Pinot Noir for the tea lovers. Seriously, there’s a lot of tea leaf here, practically half a Teavana store’s worth of it. It’ll also help if you’re fond of cranberries, mushrooms, and conversing in tones that more resemble whispering than they do shouting. This is the type of Pinot that, while finicky and understated and requiring patience to fully “get,” doesn’t shirk the bright fruitiness and generally gives Sonoma Coast the good name it deserves for wines crafted from the finicky and understated grape.

Think black: black tea, black cherries, and piles of dark, wet leaves. All of the berry fruits are bright-eyed here, but they’ve also all turned to the Dark Side. This is the richest of Thrall’s Pinot Noir lineup, and his best, and it’s likely the one that has the most acidic verve and tannic muscle (and the elegant melding of the two) to see it through a few more years of graceful development. The best couple of years for this are ahead (that’s where my money is, anyway; we’ll see, since I have a second bottle and I don’t plan on opening it for several more seasons).

The first thing you’ll notice about this Pinot is that the lighter cherry color speaks more of dark rosé than it does modernly-styled PN. Aromatically this is terse, but the lithe palate opens up quickly and nicely, with spicy, brambly red berries and a hint of earth (I think Ed is really into dirt). It’s hardly indicative of what we typically expect from Anderson Valley, not least of all in the 13.whatever percent alcohol. But rather than suffer for its lack of typicity, this whole-cluster Pinot is just a racy joy to drink now; it’s actually reaching for the phone now, I think, and attempting to order a gourmet pizza…