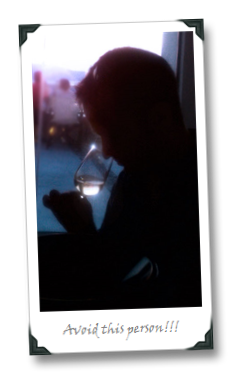 Instances and identification of the Wine Snob in the wild

The wine snob, isolated, is rarely dangerous and poses almost no immediate threat apart from annoyance. There are cases in which it has been reported that the wine snob will “leech” onto an unsuspecting person and follow them incessantly, carping verbal nonsense – the phrase terroir (tear-WARW) is often repeated – and requiring the person to physically remove themselves from the area to abbey the threat. However instances of bodily harm in these cases is statistically quite rare, and most “threats” from the wine snob have been completely overblown in the modern, scandal- and –shock-hungry press.

Identification of the wine snob cannot be successfully confirmed based on the presence of wine alone. This is an important enough point that it bears repeating and additional emphasis: not all specimens possessing a wine glass in the wild are wine snobs. The instances of wine snobs within any given wine-drinking population are still quite rare. Again, verbal confirmation must be obtained, as the presence of the wine snob also cannot be confirmed via nesting ground, habitat clues, tracks, diet or scat.

Wine-stained urine is not a reliable identification measure.…

The only way to confirm a wine snob sighting is through verbal clues. They will almost exclusively utter one or more of the following phrases (with the remainder of their speech patterns manifesting as unintelligible to any but the most experienced field guides):

The wine snob feeds primarily on wine and other human foodstuffs, and has highly developed and fragile psychological needs for wine information. It appears to derive great pleasure from hearing its own verbal cues, even if alone. It should be noted that the wine snob drinks very little water, taking most of its moisture needs from wine, augmented with the blood of its infrequent prey, which it laps readily after a kill.

Wine snob sightings are most likely to occur in large metropolitan areas, though they certainly are by no means isolated to those areas, and rural sightings have become more common as the proliferation of the wine media on which they feed has reached new heights and high volume in recent years (2013 at the time of this writing).

Social gatherings for humans are a common and excellent vantage point for sightings, particularly wherever their psychological crutch (wine) is served: bars and restaurants in urban areas, holiday parties and functions in outlying suburban and rural areas.

Generally, the wine snob is much more nuisance than threat, and even then the nuisance is primarily verbal. In larger numbers, however, the wine snob can become dangerous, particularly when a group of them detects an outsider or begins to feel threatened.

If you are tracking a wine snob and happen to inadvertently stumble upon a larger group, you may feel an almost irresistible urge to flee. Do not, under any circumstances, run, for it will almost surely mark the end of your field days as it will signal easy prey to the wine snob group. Instead, feign nonchalance and act as if their lair is simply a point along your way to some other destination, avoiding direct eye contact and at all costs avoiding verbal contact with the wine snobs. Slow, careful, deliberate movements are best, avoiding running and quick jolts, both of which may trigger predator responses.

10 thoughts on “The Wine Snob: A Short Field Guide”