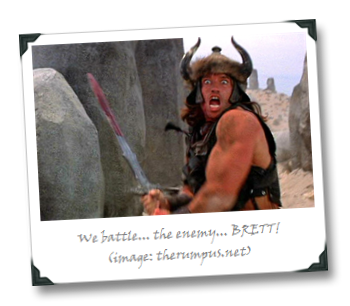 No, I’m not kidding.

The fact that the Australian Wine Research Institute researches have sequenced the Brettanomyces genome is, potentially, the single most important piece of news to hit the wine world since it was discovered that malolactic fermentation could be controlled. In terms of newsworthy impact, it makes Scarecrow’s busting of the Premiere Napa Valley auction record look like the equivalent of your regional free paper running a headline like “Local Youth Paves Driveways.” And for me, it makes the recent Pancho Campo/JayMiller/Wine Advocate pay-for-play tasting controversy taste like small beer.

For those wondering what the hell I’m on about here, last week I was sent a link to a Decanter.com article titled “‘The enemy’ at bay: scientists crack brett gene code” by a fiend via email (the subject line: “Finally, some good news! What will Bobby P. do??”).

The story, in a nutshell, is that Brettanomyces – the spoilage yeast responsible for creating aromas in wine that range from a hint of smoky meat to horse sweat to downright pungent, mousy-barnyard-droppings-wrapped-in-Band-Aids – has had its genetic code cracked by a team of intrepid Aussie-based scientists.

Why the big deal? Because it means the wine world is closer than ever to finding a way to control Brett yeasts – and until that day comes, I stand fast in my resolve when I tell you that Brett is not terroir, and is not really an element of added complexity; it is a flaw (and if someone’s wine happens to have the relatively inoffensive meaty kind of Brett, they’re not necessarily uber-talented winemakers or viticulturists adding a dash of complexity to their final product; odds are they’re just lucky)…

Now, if Bret could be controlled, not unlike malolactic fermentation in principle, then – and only then – can vintners say that the Brett imparts complexity and isn’t just dumb luck or a flaw, because they will have cultivated it, at least to some extent, purposefully.And cracking the Brett genome is probably the first step in being able to fully understand and then control it.

When I mentioned the article on Facebook and twitter last week, one reaction – from @vtwinemedia – jumped out to me as particularly apt: “that news could threaten some traditional house styles ;).”

If you think I’m being harsh in my short but vitriolic condemnation of Bretty wines, consider this…

Over beers, I’ve spoken with more than a few oenologists who have told me the following interesting tidbits (they and their clients will remain anonymous for reasons that will be obvious in a few short moments):

In other words, there are good reasons why the good folks at the Australian Wine Research Institute called good ol’ Brett ‘the enemy.’

And when it comes to enemies like Brett, my sentiments lie with the bard himself; by which I mean, of course, Conan the Barbarian, when he was asked what was best in life:

“To crush your enemies, see them driven before you, and to hear the lamentation of their women.”

Ok, maybe without the lamentation part…