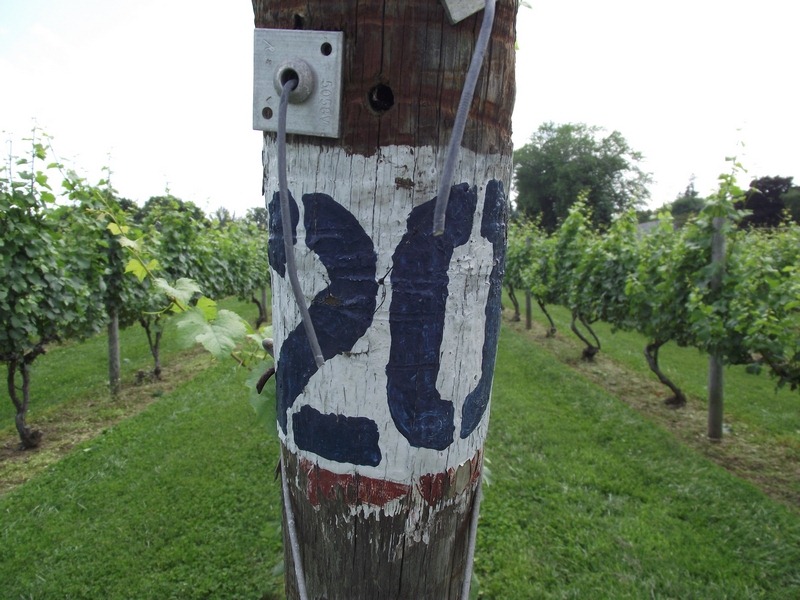 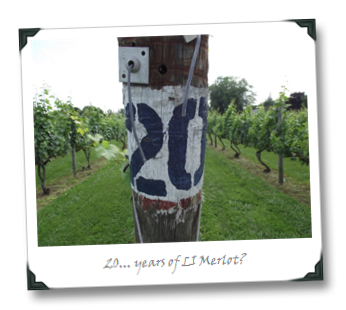 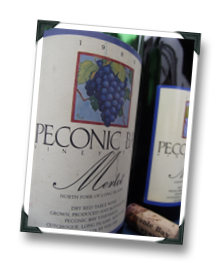 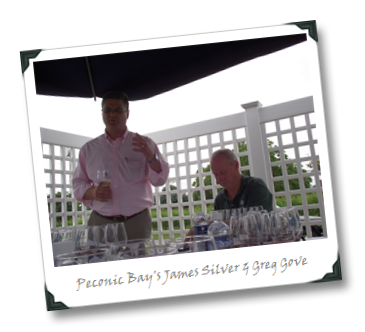 Grove has an interesting approach that made for some gritty tasting – “My reds don’t see a filter – at all” he told us, as if I needed to hear it after seeing the hefty sediment thrown by the older vintages.  Interestingly, he’s also a bit of a minimalist – except when the going gets good:  “I’m more aggressive with extraction and maceration in better, riper years,” he noted, in order to get everything out of the grapes when they had a bounty of fruit and color to give. “Much less so in moderate years,” he added, teh intent being to avoid extracting overly-green aromas from less ripe fruit.

What did the retrospective Merlot vertical reveal?  Certainly a trend towards a riper style and bigger wines generally, but that’s by Right Coast measures (some of these wines clock in at under 13% abv).  It was a fascinating look back through NY wine history – my tasting notes, along with my personal fave recommendation from the tasting, are below.  As for the band… well, we had great weather, an appreciative crowd, and pretty tasty right coast wines nearly at arm’s length. Let’s just say we weren’t complaining (pics included below, for maximum embarrassment potential). 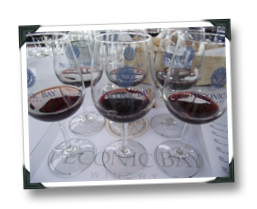 1989 Peconic Bay Merlot – About as brown as Madeira. The first thing I noticed was how savory this wine was, and how reminiscent of black olives and game meats. It still had vibrancy, but not much plum fruit left. Probably well past prime but still… that vibrancy was surprising – it had me wondering how hard cheese and wild boar prosciutto might taste with it.

1995 Peconic Bay Merlot – Wasn’t holding up well, with fruit more tired than Vanilla Ice’s career. Acidic, with hints of olives and not a whole lot else.

1997 Peconic Bay Merlot – I loved the nose on this wine – tea leaves galore, herbs, olives, red fruits, spice… and then came the palate, where things started falling apart a bit…

2000 Peconic Bay Merlot – A drastic stylistic departure from the first three wines. Much, much sweeter fruit on the nose, with oak spices and vanilla and red fruits.  A little on the oaky side but still had a nice acid profile; it probably needs food to really shine (preferably salted meats). 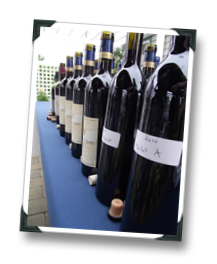 2001 Peconic Bay Merlot – Herbs, oak, and where the hell is the fruit? Disappointing after the teasing that the 2000 gave me…

2002 Peconic Bay Merlot – Layers of herbs, olives, red fruit… significantly better than the `01 and really stood out from the rest of the flight in general. You’ll need to be a fan of higher-acid, lower booze, cool-climate red – but if you are, this one could be a treat for you, because you’re not likely to find much better right coast, food-friendly Merlot that’s aging this well.

2004 Peconic Bay Merlot – Spicy, with red cherries and a lot more velvety mouthfeel. A tad on the hot side though, it was a good wine but just didn’t quite feel 100% comfortable in its own skin.

2007 Peconic Bay Merlot – The fabled recent vintage of LI red wine country didn’t seem to be offering gobs of fruit but was certainly showing off so much earl grey that it could have been the Mad Hatter’s tea party. It had great minerality, as well, and for my money was the most interesting and compelling of the entire lineup. 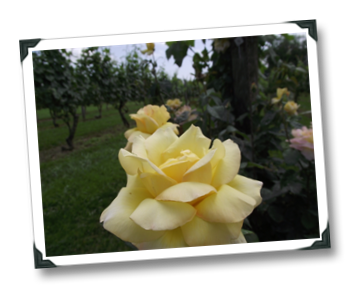 2008 Peconic Bay Merlot – A lot like the 2000, with brighter red fruits, a distinct herbal character and a spicy, peppery mouthfeel.

2009 Peconic Bay Merlot – Much darker fruits on this puppy; it was chocolaty, tougher and tannic, which I chalked up to the addition of some Cab (25%) in the mix. As we went reeling through the years, things were certainly getting bigger and this might have been the biggest of all, though not the most harmonious.

2010 Peconic Bay Merlot – There’s a fantastic dark hue to this wine, the fruits are young, a little on the sour side and quite concentrated with almost as much chocolate as the 2009. Another big wine (for the Right Coast, that is!), and it needs time to see if the fruit will stand up to the vanilla and oak spices.  Much more of this wine (3ooo cases) was produced than the previous vintages (mostly under 1400 cases and some, like the 2008, at less than 200).

And finally, my personal fave of the tasting…

A troubling vintage that had amazing weather toped off with some massive rainfall, it was feast or famine depending on where on LI you were located, how much rain you got and if you had the intestinal fortitude to stick it out and gamble that the water would drain off. For those who had it, their faith paid off – and this is one of those cases.  There’s a mix of red and black fruits, with nice concentration and a heap of spices on top of the plums to liven things up. It just smelled more “serious” than the rest of the PB lineup, and the palate delivered with a great mouthfeel that was ripe, and pretty well-balanced.  The plum flavors stood up to the oak, and the low abv (under 13%) seemed to let the acids shine just enough – all-in-all, a well-paced, well-priced, elegant balancing act that didn’t once feel tired out.  And it made me want pork (like immediately).