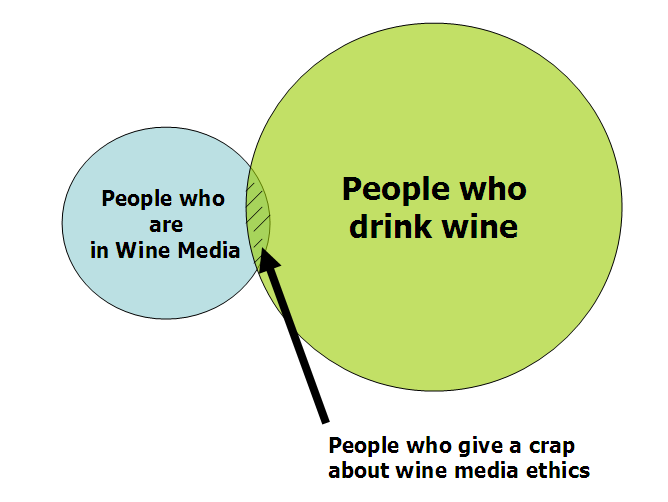 Chances are, if you’re in wine media, the answer is “Yes!  Please!”

If you’re not in wine media, I’m willing to bet the answer is “Huh?  Who gives a sh*t?!??”  I suspect that the population breakdown looks something like this: 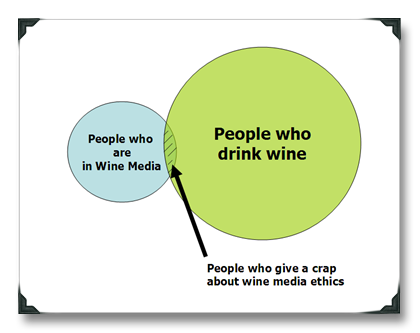 So, when I title this “Last Word…,” I don’t mean it’s the final statement to end all navel-gazing debates when it comes to the ethics of covering the wine world.  I just mean that it’s the last time I’m going to touch the topic.

I do have a vested interest in all of this ethics-debating, mind you.  I was myself the target of an ethical stone or two thrown last year, and there’s been some damn fine writing lately on what constitutes ethical behavior in the world of wine coverage.  Also, in case you haven’t noticed, I do write about wine.  Sometimes.  When I’m not drinking it, I mean.

I’ve long been an advocate of moving the wine writing ethics discussions off of wine blogs and onto other forums.  Of course, in order to make that argument, I need to dredge up the topic here on my own wine blog.  The irony…

Anyway, I’ve given the topic what for me constitutes some serious thought (at least a few seconds in-between sips), and I think the question of whether or not you’re ethical touches on the same things that make someone credible, especially when it comes to the blog-o-world:

Sure, there may be others, but if you don’t have those three nailed, then I suspect that blog readers would have you for lunch.  Quickly.

But… something doesn’t feel quite right about that list.  Something’s… missing.

Let’s demonstrate with an example.

On a recent episode of the fine radio program and podcast WineBizRadio.com, the episode’s special guest – wine PR and Fermentation blogger Tom Wark – discussed ethics with the show’s hosts.  Here’s a transcribed quote from the program:

“What’s unethical…when I call a magazine and say ‘I’ll give you $25,000 for a 93 point score,’ and they say ‘You’re on’ – that would be unethical. I’ve been in this business for 20 years and I’ve only bought coverage, uhm, once or twice. As a publicist my job is to get as much ‘right’ kind of exposure for my clients as I possibly can. If I thought I could buy a 95 point score from a reputable publication and be reasonably assured that no one would find out, I’d do it in a minute.” – Tom Wark 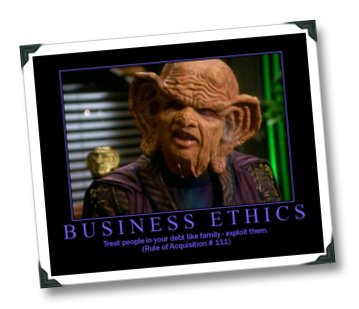 Well, Tom is certainly being transparent there (maybe a bit hypocritical, given his past statements on wine media ethics and the elder statesman role that he’s played in that space in the past, but definitely transparent).  Let’s say it actually happened, and he followed through with it and did it multiple times.  Would it be ethical?

Why?  Because the majority of people out there wouldn’t consider it ethical.  And there, for me, is the missing link.

That link is YOU.

In any media endeavor (at least, any on-line media endeavor, especially in the case of blogging), it’s ultimately the readers that determine if the source is credible, and those sources are unlikely to be perceived as credible if those same readers don’t also perceive them to be ethical.

Perception, as they say, is reality, but if you’re truly transparent then your readers’ perceptions will at least resemble reality, and then presumably you’ve got nothing much to worry about.

That’s how I’m going to operate anyway, so I sure hope I’m at least partially onto something.  It’s bound to be more fun than debating it endlessly, anyway!

14 thoughts on “The Last Word on Wine Media Ethics”