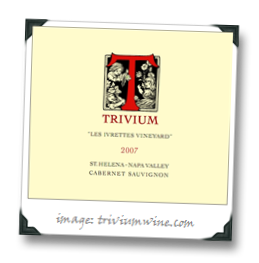 Seventh Lombardi trophy, that is.

See, I’ve been a Steelers fan for over 30 years, which places the activity in rare company when it comes to my lifetime activities, bested only by things such as breathing, sleeping and enjoying birthday cake.  And for those of you sick of hearing about my NFL alliances (basically everyone but me), I offer this tidbit only as backdrop to a duo of 2007 California wine recommendations, so don’t get your jock straps into too much of a bunch just yet.

When the Steelers won their sixth championship title I was writing a piece about a Napa Valley wine while watching the game bleary-eyed in the middle of the night GMT in England.  This year, I’ll be in Portugal (more on that next week) watching the Superbowl bleary-eyed in the middle of the night GMT.  So I figured I’d better write about some Napa Valley wine again, because we all know what happened the last time all of those totally unrelated elements came together, right?

Not that I’m superstitious. But I might be planning on wearing the same pair of underwear I had on during Superbowl XLIII. And I’m not gonna say if that pair of undies been washed since SB XLIII. Let’s just not go there, okay?

Fortuna smiled and samples of two Napa wines well-worth your time have recently made their way to my sample stash (“recently” for me, that is, not “recently” in normal people time – which means these wines have done a bit of cellar-aging by virtue of my total failure at personal time management).

And the odd thing is, they were wines I had fully expected to hate…

2007 Newton Vineyard Unfiltered Chardonnay (Napa Valley): $60 B+
The first is a ginormous, buttery, high abv (15%), 16-months-in-French-oak-la-diddy-f*cking-DAH Chardonnay that blatantly touts its unfiltered status – usually that touting, one can safely assume, is the by-product of marketing arms trying to get the attention of uber-critic Robert Parker, who has long championed the lack of filtering as the be-all-end-all of winemaking. On paper, it was almost everything that I don’t like about CA Chardonnay. 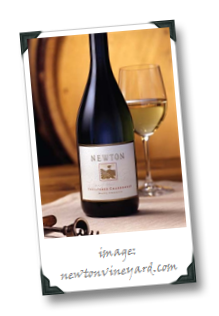 But it only takes a few sips to realize the `07 Newton is far from being an overblown beast of a wine. There’s a good deal of acidity to balance out the gobs of tropical fruit and buttery, pie-crust overtones, and the wine offers up a lot of character (caramel, coconut, citrus, and sweet spices), much of wish carries through a fairly long finish. My guess is that the use of wild yeasts for fermentation spiced things up enough help make this a balanced biggie (but that’s just a guess). A nice wine for chicken and sweet potatoes. For another excellent Napa Chard fermented with wild yeasts, check out Franciscan’s Cuvee Sauvage (you can also watch my interview with Franciscan’s winemaker Janet Myers for more info. on their wines).

2007 Trivium “Les Ivrettes Vineyard” Cabernet Sauvignon (Napa Valley): $65 A-
Why be skeptical about a wine made by a group of nice guys (one of which, Stu Harrison, has been in the biz for as long as I’ve been a Steelers fan and is the marketing due behind Continuum and Opus One) with a good deal of Napa winemaking cred under their belts (the other guys – Jack Stuart and Doug Wight, have something like 50 years of winemaking/winegrowing experience between them)?  Well, for starters, they posted a “Cabernet Manifesto” and purport that they’re taking a “gamble” making wine less “laden with alcohol… in an age where fine wine is becoming more of a homogenous commodity” and then are bottling a 100% Cabernet Sauvignon that clocks in at 14.6% abv.  Uhmm… well… my Spider-Sense was tingling when I approached this one.

Turns out I needn’t had worried a bit – the `07 Trivium is a Kick-Ass but balanced Cab. (though, alas, made in tiny quantities at about 368 cases). There are herbs, spices and a touch of roasted nuts here to round things out, but the focus is clearly on the concentrated dark fruits and tobacco that dominate this wine, with decent acidity that leaves it rich without feeling too big. My gut tells me that this one will shine brightest in 5-7 years, but I’m not sure I’d give it much more than that.  It tastes great now, anyway, and if you’re lucky enough to track this one down but too impatient to cellar it, three hours in the decanter ought to tame it enough to take on a nice hanger steak.