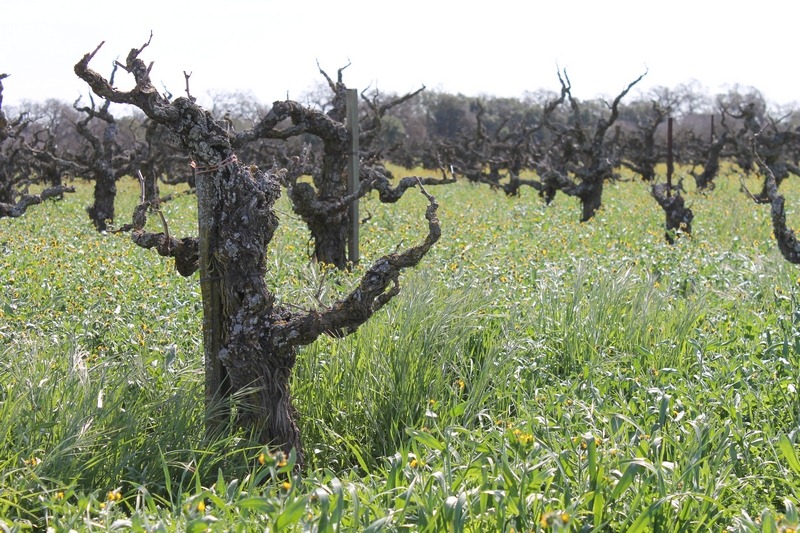 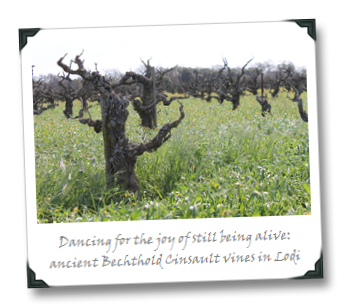 Being in the presence of vines that predate automobiles, both World Wars, and the eight-hour workday (seriously… look it up!…) and that are still producing fruit… that’s a tough one to put into words. Communing with those gnarly, old souls – and that’s really what you’re doing if you visit as a wine geek – isn’t something you talk about so much as experience, which is probably why Randy didn’t say much about it and just insisted that we stop there first during our visit.

And I know what you might be thinking… well, you write, don’t you? so at least give it a try, man!

But the truth is that I have tried, five or six times, and every version fell short of the reality of being there, because it isn’t something that gets transmitted through the smell of the green cover crop, or the warmth of the air, or even the sight of the vines… it’s all of those things, and… something else, something more. Something that doesn’t make sense until you’re in the presence of living things that can easily outlast your time here on mama Earth, to which you’re literally little more than a transient specter.

The Bechthold vines are borderline-ancient, but in such amazing shape that their twisted tendrils make them look as if they’re dancing, celebrating for the sheer joy of still being alive. And the fruit still being produced by them is superb, if the finished wines into which they’re made are any indication.

That the Bechthold vineyard survived the early 2000s, when the Bechthold family were getting a measly $200 a ton for its grapes (you can blame the location, and the fact that the grapes were labeled as “Malvoisie” – basically a price-killing combination in the CA wine biz), is a bit of a minor miracle. Wanda Woock Bechthold, now in her early eighties, had UC Davis check out the grapes, which were identified as Cinsault (took them long enough, didn’t it?) and were then pitched to higher-end clients (a list that now includes Bonny Doon, Turley Wine Cellars, Phoenix Vineyards and Michael-David), effectively raising the prices, justifying the farming costs, and saving the magic. 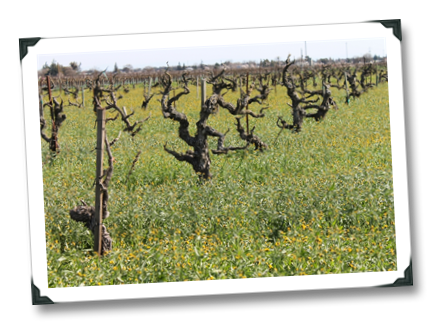 Randy has authored a recap of the vineyard’s history, and an interview with the Bechtholds and their clients, on the Lodi Wine blog. I’ll sum it up using this quote from Randy’s story, which to me kind of says it all:

“Randall [Grahm, of Bonny Doon], came out with a friend from France, Nicolas Joly (France’s best known biodynamic proponent).  Nicolas was amazed by the inherent vigor and health of the vines, and the quality of the grapes – declaring it ‘the equal to any Cinsault plantings he had ever seen in France.’”

If you want to go off the deep end on the place’s history, you can check out Mrs. Bechthold’s book on the subject. What Randy and I opted for was to sample some wines created from the vineyard’s grapes, which we did while standing in the vineyard itself… can’t get much more connected and down-home than that, I suppose (how Bohemian of us, right?). The biggest take-away for me? Don’t let anyone ever tell you that Cinsault cannot make world-class wine on its own. Take the ratings with a grain of salt, as always – trying to pin wines like these down to a snapshot/score for me is like letting a tiny piece of your soul die…

I am going to tell you now that this wine catapulted itself into the running for the 1WD Most Interesting Wines Of The Year list on first whiff. This wine is like crack cocaine for Cinsault lovers (admittedly, all twelve of us…) – peppery, with understated, elegant red berry and dark cherry fruits… it’s deep, focused (as you’d expect from older vines producing intense, small berries), with plum fruits coming out towards the end of the sip and there’s a wonderful structure underneath it all that is both focused and vibrantly joyous at the same time (if that makes any sense). This is old souls showing how it’s done. 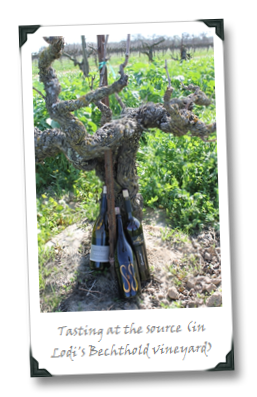 Miner’s Leap has gone full-on pretty with this wine, focusing on the purity of the red berry fruit. It has depth as well, but femininity reigns supreme with this juice, and if you’re looking for the softer, contemplative side of Cinsault then this is your puppy right here.

An honorable mention goes to the third wine that we tried in the vineyard on that sunny late February day, the 2006 Jessie’s Grove “Sin So” Cinsault (Lodi, about $35). It doesn’t get a badge because I don’t have a badge for “Ballser.” To make a long story short, winemaker Greg Burns (who is Wanda Woock Bechthold’s son) decided that, since Cinsault is one of the most anti-oxidative grapes, they would see how it held up against an oxidative treatment in the winery (the aging required accounts for why the 2006 is the current release). It’s a wine of dry fruits and flowers and caramelized notes, and is best described as an awesomely geeky experiment – one to try for the Cinsault-ultra-curious, but probably not one to pop open for your friends.

Now, if you’re wondering how big some of the old, Old Vines can get, I’ll leave you with this photo, taken by Randy, of little-ol’-130-some-odd pound-and-5’5”-ish me “dwarfed” by an ancient Tokay vine in Lodi… just go easy on the height jokes, okay?… 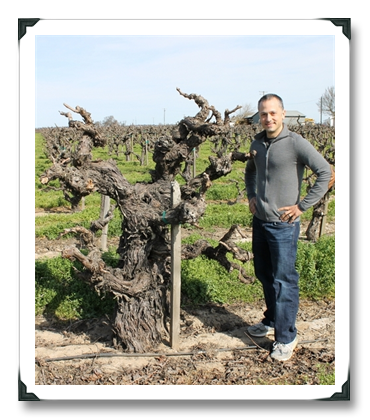 26 thoughts on “The Greatest California Vineyard You Don’t Know About (Communing – And Drinking! – With Old Souls In Lodi)5 min read”