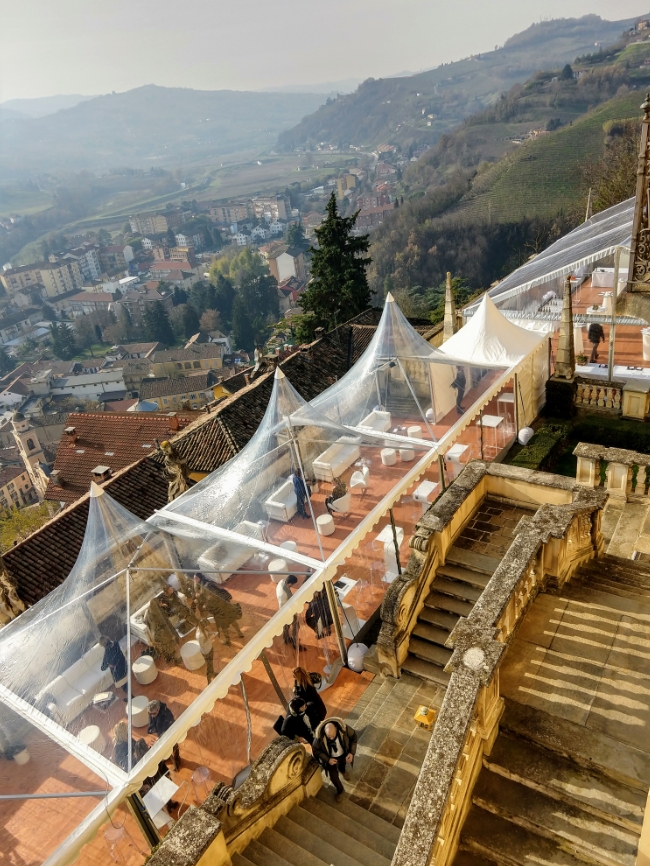 About ten minutes or so into Walter Speller‘s presentation on Moscato d’Asti, I realized that I was some kind of idiot.

Speller’s masterclass was part of a presentation given to media guests gathered at the bucolic Castello Gancia, smack dab in the heart of Asti and a focal point of the area’s recent UNESCO designation. It’s the kind of place that you imagine in your dreams of what Piemonte would be like (17th century architecture sitting atop gorgeous rolling hills… that sort of thing).

Anyway, it only took me about ten minutes into that masterclass for the cold water of facts to jolt me out of any residual dreamlike morning Piemonte trance into the realization that just about everything that I thought I’d known about Asti’s boisterous vinous calling card was, basically, absolute wrong. I’m betting that most of you reading this have gotten it wrong, too; the simple truth is that the simple pleasures of Moscato d’Asti – hands-down one of the dead easiest wines to enjoy – belie complexities that are pretty friggin’ serious.

I’m not talking about Moscato’s complexity in the nose, either; though a good argument could be made that, in terms of volume of aromatic compounds, Moscato Bianco is one of the most aromatically complex grape varieties in the world. But I am talking about… well, just about everything else that goes into making a finished, drinkable Moscato d’Asti product…

Moscato Bianco has been in the Piedmonte mix of making high quality wines since at least the early 1500s, though its longevity in that category (as Speller put it, “a mediocre wine could never stand the test of time”) is a bit peculiar given what a pain in the ass it can be to grow properly. To get the right mix of acidity, sugar, and aromatics, you need to pick Moscato Bianco at the right time – usually between August and September, when it’s most prone to be rainy. As (bad) luck would have it, the grape is susceptible to powdery mildew, so that timing is perfect if your goal is to increase the need for vineyard labor.

To mitigate this – and to grow the stuff on the right soils (ancient seadbed and sandstone, for instance) to fine-tune the aromatics (yet another hidden complexity) – Moscato in Asti is mostly planted on hillsides at higher (200-300 meters) elevation. This has the effect of vastly increasing the need for manual viticulture (unless you are fond of flipping tractors), since over 9700 hectares of Moscato in the region are planted on gradients above thirty percent. My back hurts just hearing things like that. Oh, and much of the vines are older plantings, so they naturally produce lower yields. They also consists of lots of smaller (about four hectares on average) plots, with some vineyards now in danger of being abandoned altogether (can’t say that I blame them, given the combination of all of the above).

If it’s beginning to feel like it’s a miracle that these deceptively simple wines ever get made, we haven’t even talked about the vinification method, which essentially combines arrested fermentation (to retain natural sweetness) with Charmat-method bubbles (a process that Charmat himself refined, but was invented by the un-credited Italian Federico Martinotti). These are laborious processes to get right even now, so one can imagine how difficult they used to be before techniques like, say, refrigeration. Moscato d’Asti, after all of that, also happens to be one of the more regulated wines on the planet, mandatory vintage declarations, and every bottle being (theoretically, anyway) traceable at every step from the vineyard to consumer sale.

So… I felt… dumb. Hopefully, after reading this, you feel the exact opposite, and are ready to show off your newfound wine smarties the next time you’re kicking back on your yacht pouring copious amounts of Moscato d’Asti for bikini- (or speedo-) clad models. Unless you already knew all of this stuff about what might be Italy’s most deceptive “simple” wine, in which case, stop lying already.