Wine writers who work in print are a distrusting bunch.

That’s one of the conclusions that, while not exactly all “sunshine, peace, love & Marsha Brady,” is nonetheless a logical one that could be reached after you peruse the results of Tom Wark’s recent 2010 Wine Writers Survey. 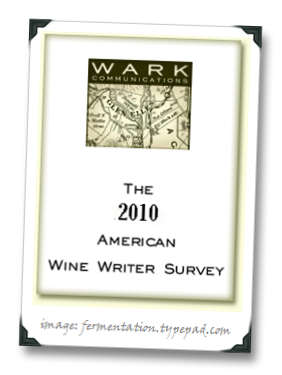 Much has already been written on the subject of Tom’s survey results (my personal fave to date comes to us courtesy of the scathingly witty Tom Johnson), and while I tend to avoid “me too!” subject matter articles, not chiming in on the wine writing survey results (in which I participated as one who was surveyed) while attempting to make a living as a wine writer… well, that just felt odd.

In terms of what the hubbub is all about, the main point of contention is this: the survey results strongly suggest that print wine writers find on-line wine bloggers to be unreliable sources of wine information, and (less strongly) imply that print wine writers feel their livelihoods are threatened by a largely inexperienced cadre of on-line wine “writers.” Tom sums it all up nicely:

“In my view, the single most important point that would lead anybody, and in particular experienced wine writers, to downplay the credibility and trustworthiness of a blogger is the well know fact that there is absolutely no gatekeeper when it comes to who can publish a blog. There is no pre-assessment of the talent and skills of a wine blogger prior to their publishing. There is no editor that evaluates their skills and gives the blogger the job of writing about wine. Bottom line: A fourteen year old girl inhabiting the attic of her mother’s home on the North Dakota border with Canada and suffering from delusions can as easily start writing and publishing a wine blog as the most experienced wine writer living in the heart of Wine Country.”

Namely, the fact that blogs are interactive, and printed articles are not.

This is so profoundly obvious that many in the debate could be missing it solely from its obviousness, sort of the way that tiger attack victims often report that that they didn’t view a several-hundred-pound predator as a threat until it was too late, even if they knew it was close enough to be a threat.

My take on print vs. online media is that print’s business model screwed the pooch a long, long time ago. It has nothing to do with wine and is happening in every form of print media on any subject matter. People enjoy interactions and opinion, and are seeking to balance straight-ahead, mostly-objective, fact-based coverage (which for decades has been the bread-winner for print) with subjective, opinion-based, op-ed-style pieces that by-and-large center on the unique voice of the writer.  In other words, nowadays people will take a human relationship and a sense of personal trust over a pronouncement of facts (or even opinion) as deigned from an expert.

Blogs are, of course, uniquely well-suited to ruling the roost when it comes to this interactive style.

If you don’t believe me, I suggest that you listen to Jancis Robinson, a name that most readers will already recognize as having conquered both the print and on-line worlds of wine coverage (and who now credits her on-line publication with providing the majority of her income). Specifically, cue up this Masters of Wine Symposium video to 12:40 and listen to Jancis’ take on the role that she thinks non-interactive wine expertise holds in today’s wine coverage:

“I think the age of the wine guru… the wine expert that cannot be criticized and cannot enter into any interaction with their consumer is dead and gone.”

That about sums it up, doesn’t it?

I of course have a much more positive view of the potential influence of bloggers than the rest of the panel in that video (who largely see blogs as having little-to-no-influence on consumer wine purchases), but I don’t disagree with CellarTracker.com founder Eric LeVine’s take on the current influence of wine blogs (and that’s not just because he mentioned 1WD specifically as one of the few that are having impact… but I suppose that I do owe him a beer now…):

“It takes a really exceptional blog to have enough of an audience to have any real impact.”

Hasn’t that also been true of wine writing in print for, well, more-or-less forever?  On the Internet, people can smell a fake from a mile away, and expose them faster than Carl Lewis could run that same mile. You need be good to have impact anywhere online, not just in wine.

Of course, not all of the wine mags and print columns are exceptional, but would anyone honestly read the work of people like Eric Asimov, Steve Hiemoff, and Jancis Robinson, and say they “just got lucky” that they’d built a following via print?  No f—king way. We can say the same for the Alder Yarrows and Tyler Comans of the online world – the impact is smaller only because there’s been less time, not less talent (just more lesser-talent!).

All of this, I suppose, is a rather long-winded way of saying that blogging is still very early days when it comes to wine writing, and it will eventually move more and more of the wine market, and that this is part of a much larger fundamental shift in the world of media from consumption of facts and expert-based opinion to one of opinion about facts that operate on smaller, interactive groups that have come to view someone as an expert for them.

Hold onto your corkscrews, ‘cause this ride is just getting’ started, baby!

34 thoughts on “The Distrusting Wine Writers Survey (Thoughts on Thoughts on On-line Vs. Printed Wine Coverage)”