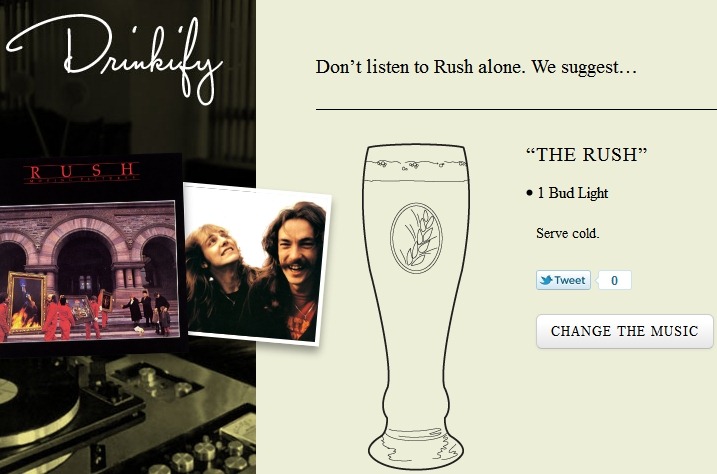 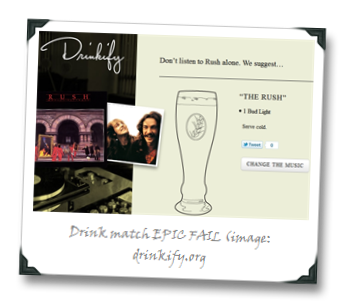 I’ve been playing around with on-line music-and-cocktails-matching entertainment app Drinkify, and have concluded via completely non-scientific means that it is almost a total failure (at least, when it comes to one pairing in particular).

It’s fun, don’t get me wrong; it’s just that it offers me the booze-pairing “beer” (I use that term loosely) suggestion of Bud Light (!) when I tell it that I’m listening to RUSH – and that, my friends, is a FAILure so epic in size that its scope can only be measured in light years.

While Drinkify might be fun, the pairing of music with imbibing, at least when it comes to wine, isn’t simply a laughing matter: according to a story published on wired.com earlier this month, a recent study (led by Adrian North of Heriot-Watt University), showed some rather scientific evidence that our perception of a wine’s qualities is measurably influenced by whatever music happens to be playing in the background when we drink it.

And I, for one, think that odd bit of news is actually pretty… awesome…

First, the background; to the tape (emphasis is mine)!:

“In a new study, Adrian North has shown that when people drink wine to the accompaniment of music, they perceive the wine to have taste characteristics that reflect the nature of that concurrent music… After they’d savored their wine for five minutes, the participants were asked to rate how much they felt the wine was powerful and heavy; subtle and refined; mellow and soft; and zingy and refreshing. The results showed that the music had a consistent effect on the participants’ perception of the wine.”

Personally, this tidbit, while fascinating, isn’t a big deal to me, even as someone who is a part-time musician and also critiques wines; primarily because I am the father of a toddler, and so I find myself more often than not trying to apply a professional level of focus to reviewing a glass of wine while the soundtrack to Disney’s Tangled is being played, for the eleventh consecutive time that day, not-so-quietly in the background. I’m not sure what qualities *that* music imparts to the perception of a wine, but if anyone from the Department of Homeland Security is reading this, I can offer you some tips on a new potential interrogation technique (assuming – and it is not a sure bet – that it passes the test of lying outside the definition of torture).

The music+wine connection is not a big deal to critics because once one is conscious of some external stimulus (in this case, music) is messing with your wine-perception brain, the mere knowledge of that fact morph it into just another potential distraction to be tuned out while working. Just as I’m trying to tune out my daughter’s climbing on the side of my office chair at this very moment as I type this, waving an electronic Disney Ariel princess magic star wand (complete with light and sound!) around my head – the purpose of which (discovered upon interlocution with the wand-waver) was to impart to me “all kinds of glittery and pretty and decoration stuff” in order to make my hair “shiny and nice and gluey.” 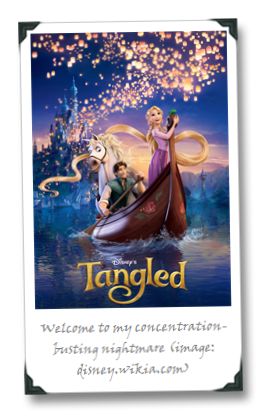 Hopefully I can be forgiven for considering music’s potential impact on my wine work as relatively small beer in comparison (but not as small a beer as Bud Light, Drinkify!).

Anyway… North’s study lends some credence to the notion that some Credence might make you find a wine more jaunty than if you were listening to Marilyn Manson while you were sipping it, tough I doubt that either will make bayou juice feel more like a grand cru.

And it probably should be required reading for winery tasting room managers everywhere, since the tune selection on the tasting room PA system might just help them to emphasize the qualities that they most want visiting consumers to remember when it comes to their wine brands. Music as wine brand value retention? Hey, stranger shiz has happened – I mean, if you dye a white wine red, it can fool even experienced tasters, so the music connection shouldn’t seem too far-fetched in comparison.

Note to tasting room staff: I’d recommend against using the Tangled soundtrack unless you want visitors to assume that your wine can make them youthful and probably slay dragons; I’d also avoid Bob Dylan’s Tangled (Up in Blue), unless you want customers to assume your wine is best paired with periods of intense remorseful sobbing.

So the next time that someone gives you grief over the notion of wine and music pairing being hackneyed, send them a link to this post (and tell them to take a bottle of Priorat with some late Beethoven and call you in morning). And the next time you want to know what it’s like to be me for a few minutes, try writing a wine review with your non-writing hand tied to your opposite foot behind your back, while setting this track on repeat (for infinity) – no offense to Mandy Moore, but if familiarity breeds contempt, then me and that song are never really gonna make up…