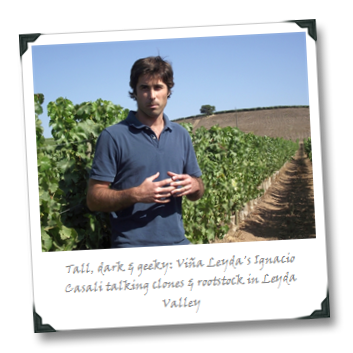 Even though I’m a thoroughly-clueless heterosexual, it’s obvious even to me that Ignacio Casali – Viticulturist for Chile’s Viña Leyda – probably has had little trouble attracting the ladies. Ignacio possesses the kind of strong jaw and rugged, 5:00-shadow good looks that likely mean he has never had to struggle through hours of vivacious small-talk well-timed humor, and cajoling (the way that guys like me have) in an effort just to appear attractive when buying a girl a drink.

But before you eligible bachelorettes start emailing me for Ignacio’s number, you should know that if you ever do meet him it’s very unlikely that you’d be listening to Ignacio wax poetic about how your eyes resemble the nearby ocean (the Leyda Valley is located a mere 12 km east of the port area of San Antonio in central Chile).  No, no, no – you are far, far more likely to hear him wax poetic about the far, far less sexy topics of rootstocks and vineyard clones from U.C. Davis. 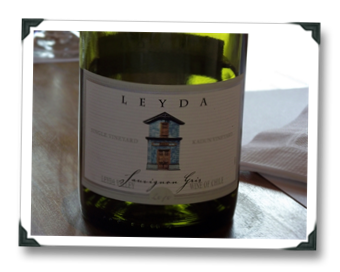 You see, Ignacio is a wine geek, tried-and-true, and he’s clearly most at home in Leyda’s vineyards, talking about their experimental half-circle / fan-shaped plantings of vineyard rows (those look pretty odd, by the way), or providing details on which rootstocks are planted where (and why) on the property, or expounding the subtle differences of UC Davis grape variety clones and their soil suitability.

To understand why there’s such a geeky focus on clones, vineyard management, and a sense of experimentation at Viña Leyda – and to really get to know the details behind some of their crazily-overachieving wines – you need to understand the lay of the Leyda Valley land, and educate yourself on some details about the Chilean wine market…

When visiting Leyda, it’s only a matter of time before you notice the cool breeze that whirls through well-planned, graceful curves of the hillside vineyards.  There is no mistaking where that breeze comes from – it absolutely, at its core, is a product of the nearby sea.  There’s also no mistaking the starfruit and lemongrass tastes that pop into your mouth when sampling Sauvignon Blanc grapes just before harvest in those vineyards; it’s textbook cool(ish) climate stuff.  I was there just as things were gearing up for harvest, as part of a Brandabout-sponsored sojourn to the region.  Before I left for Santiago, I asked the 1WD faithful what they wanted to hear about when I returned, and more than a few (via the blog, twitter, and e-mail) mentioned Leydain their responses; so my expectations were high before I’d even set foot on the property. 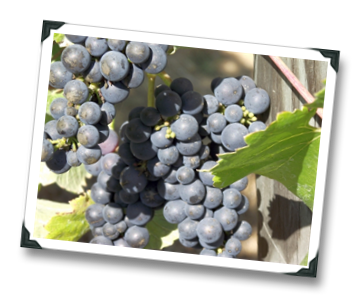 The beautiful scenery, tasty grapes, and cooling breeze combine for a sweet experience.  It’s almost a sweet enough experience to get the talk of UC Davis clonal selection out of your head.  Almost.  But it’s not quite sweet enough to distract your mind from incessantly playing back the phrase “Leeeeeeeeyda” to the chorus of Derek & The Dominoes “Layla” (in case you’re wondering how many times that happens during a visit to Leyda Valley, it’s approximately 14 billion… per hour… if you have my twisted type of brain, that is).

Anyway… that cool ocean breeze, of course, is what moderates the temperature here and allows for varieties like Sauvignon Blanc and Pinot Noir to perform well, maintaining their racy acidity (rather than getting totally fried in the Chilean sun) and creating wines with real vitality.  But on top of that location-foundation, Leyda seems to be building a reputation for experimenting – like crazy. I wondered aloud, during a tasting through some of Leyda’s current releases, if that willingness to try new things, and the focus on the details of matching plant clone to microclimate location, was part of the relatively young and freewheeling winemaking culture in Chile.  Fortunately, Cristián Goich (Viña Leyda’s Export Manager for Asia & Eastern Europe) was around to hear me, and to help.  As it turns out, the reason behind the experimentation is just the opposite of what I’d supposed.

“It’s kind of the professionalism, the maturity of the wine industry now in Chile,” Cristián told me.  “In the last ten years, it [experimentation] has been much heavier – winemakers working abroad, new varieties planted; it’s only been since `96 that Syrah was planted in Chile, for example.  For a long time, the industry was very conservative, using consultants only from France; now, we have winemakers coming in form all over, like Australia,” bringing with them new ideas that the locals are all-too-willing to try. 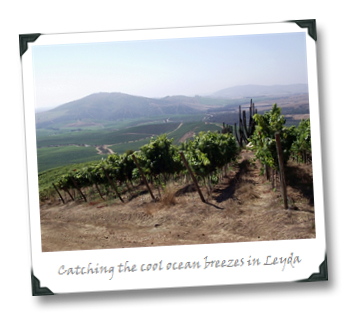 Competition is a driving force for experimentation, as well as industry maturity. “It’s fierce,” Cristián noted, and it’s pushing innovation to help maintain growth in a market that is seeing a succession of challenges: first, the recent earthquake hammered the bulk wine industry; then a devastating frost hit in the Spring of 2009; now, a weakening U.S. dollar (which has seen nearly a ten percent drop in value between June and December 2010 alone) is causing headaches for Chilean producers, many of whom count the U.S. as their top export market.

Fortunately, Viña Leyda is responding to the challenges by making a fair amount of releases that dramatically over-deliver for their price points, even when held against the high standards of over-delivery that are the  hallmark of the better South American producers these days:

Your first reaction is probably “what the hell is Sauvignon Gris?” Think of it as a good, cool climate Sauv Blanc (in its citrusy, tropical, and herbal aromatics) meets good, cool climate Chardonnay (in its creamy structure and full body), with a lemon-rind finish thrown in for good measure.  I’m not gonna go so far as to say that Savuignon Gris will be the next “breakout” variety from S. America, but I am gonna say that I could drink me a lot of stuff like this.

Made from fruit in cooler vineyards that are harvested at slightly different times, this is a serious, elegant SB that delivers way more complexity than you’d expect for under $20. Lemons, herbs, chili pepper, and some ripe tropical fruit all come together to make for a fairly stunning bargain.

I wanted to hate this wine when the Leyda staff described it to me (I know… about every other Chard review I write begins that way…): oxidative fermentation, and actually increasing the percentage of new French oak over previous vintages. But the results are downright sexy and assertive in an almost feminine way (I know, I hate myself for using that descriptor, too, but it’s apt): crème brûlée, apricots, and a dash of cinnamon. But she’s got a ton of crisp, acidic bite too. Whether bachelor or bachelorette, you’ll probably be wanting her digits.

I tasted this hand-pressed beauty as a tank sample, but even this early in its development it is already showing a ridiculous amount of harmony, and is built on an amazingly fresh acidic backbone & textbook red-berry Pinot fruits. There’s just a touch of oak and smokiness, and a layer of toasted coconut and Christmas spices. It was one of the first wines I tasted during my S. American jaunt to stop me right in my tracks, and it beats the pants off way more pricey Pinot coming out of Napa (for a lot less coin).  ONly 600 cases were made, so grab it if you find it.

3 thoughts on “Tall, Dark And Geeky: Is Vina Leyda Hinting At A Newfound Maturity in Chile’s Wine Industry?”