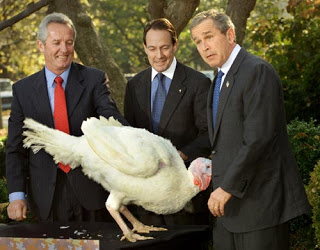 This way-cool special edition of Tales of the Purple Monkey has Plumboo and I not tasting or reviewing any wine whatsoever!

Participating as we do in the ongoing monthly wine blogger carnival Wine Blogging Wednesday, the Purple Monkey and I usually take part via a theme-based wine review. Instead, this election-year-inspired September WBW theme (hosted over at the fine blog 2 Days per Bottle) has us picking a wine that we will taste in the future, in order to answer the question “What will you drink to toast the end of the Bush era?”.

Before Dude answers this one, there are some things that you need to know about the Dude:

Ok, now that we’ve lost all seven of the Bush supporters who may have been reading this, we can get down to business!…

I will be toasting not only the end of the Bush era, but also the beginning of the era for whoever the hell is coming next… because I feel it’s extremely unlikely that they will make worse decisions than Bush in terms of the progression of Liberty, fair trade, U.S. economics, foreign policy, environmental concerns, education, separation of church & state, and energy independence. I could go on but Dude is getting a little angry now. Let’s just say that I am thankful that Bush stayed in good health, so that Cheney never had a chance to try to ruin, er, I mean run the country. 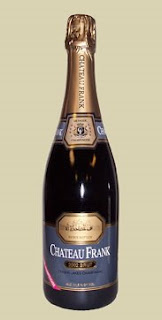 There is but one choice for a toast under these circumstances. Bubbly! And lots of it.

Which means that the bubbly needs to be tasty, and not too expensive. Sparkling wine to the rescue!

It goes without saying that this wine must be made in America. So, I’m going with a NY Finger Lakes stalwart: Chateau Frank‘s Brut. The vintage, naturally, will be 2000, the year that Bush stole, er, I mean took office. This wine happens to be aged underground for three years “sur lie,” which means on its lees (the remnants of the yeasts from fermentation), giving it extra body, and a pleasing bready character. That is also auspicious, considering that the word “lie” comes to mind immediately when Dude hears about the Bush administration…

Now that I think about it, having a wine in my cellar that so perfectly matches this situation might be a sign that the universe itself is, in fact, intelligent. Not sure…

Anyway, a toast:
The King is Dead! Long Live the King!!

2 thoughts on “Tales of the Purple Monkey: Bye-Bye Bush”