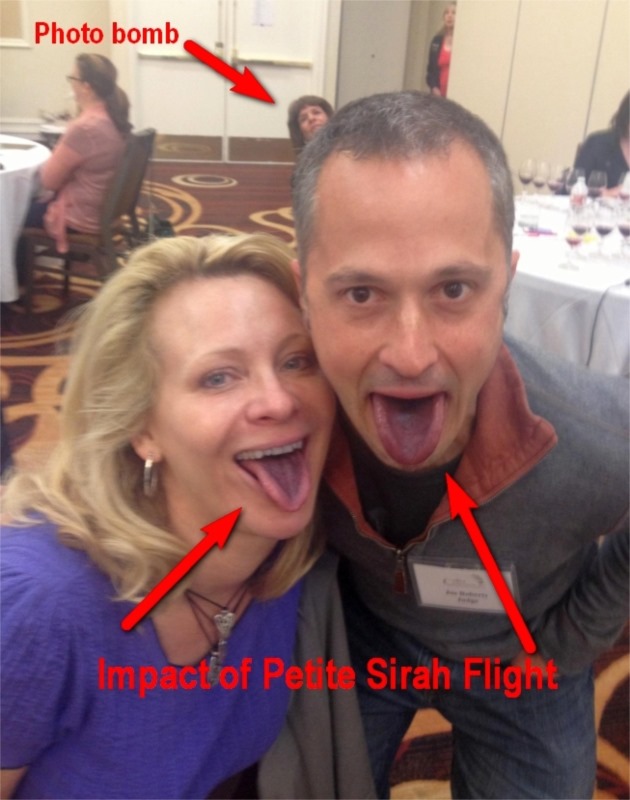 Late last month, I wrapped up a stint at the fourth and final wine competition in which I’d be judging in 2013, the 10th Annual Critics Challenge in (Stay Classy) San Diego.

The results of that comp. have been announced. Following are some thoughts on the Critics Challenge itself, and notes on some of the winning wines. 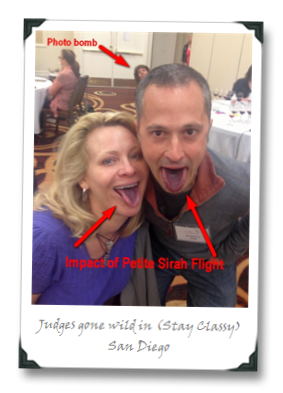 All hyperbole aside, I loved judging at the Critics Challenge with a passion that burns like the core of a million undiscovered stars [ Editor’s Note: not all hyperbole has been taken aside ]. And so, this might turn out to be a love letter of sorts to the CC.

The only CC cavil I’ve got is that the location, a bit outside of downtown (Stay Classy) San Diego isn’t the most convenient or picturesque of spots (unless you really enjoy close-up views of twelve-lane highways and strip malls). Otherwise, the CC is the kind of wine comp. in which almost any judge wishes he could take part: high-caliber judges who aren’t douchebags, a volunteer staff that keeps pace with any (I’ve yet encountered) worldwide, a well-organized agenda, generally very-good-to-excellent wines being entered, and a total dismissal of what has become a meaningless award given in American wine comps. (the Bronze Medal). I can’t even fault them for giving me that Petit Sirah flight, since a) many of them were good, and b) they gave us Sensodyne whitening toothpaste.

Each of the CC judges is paired up, with each pair getting a volunteer captain to coordinate logistics, and the highest medal awarded between the pair for any given wine becomes the final award chosen (predicated on the idea that if you only invite judges who know what the hell they’re doing, this system should turn out to be fair to the wines and to consumers). In what I can only conclude was a fit of insanity, head honcho Robert Whitley paired me with ThirstyGirl.com founder and all-around-awesome-girl Leslie Sbrocco; we beat the oddsmakers, though, in that neither of us was either kicked out of the comp. or arrested by the (Stay Classy) San Diego police…

Leslie and I of course didn’t entirely agree on all of the wines, but we agreed far more often than not, and were treated to a flight of high-end reds that, to date, remains the best all-around flight of wines I’ve ever received in a competition (every wine medalled in that flight, by the way). We also managed to work the words “Godzilla” and “nipples” into our tasting notes at one point, which I took as the hallmark of a successful day. 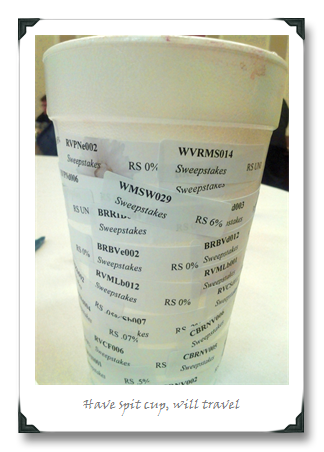 Okay… now the highlights of the winning wines, some of which, I think, will surprise you in terms of their QPR action:

Best of Show Red
Castello Banfi 2010 Belnero (Toscana IGT, $28) – Not my fave choice of reds that weekend, but unquestionably a complex wine that was drinking great on the day. It will strike some as too dense and oaky at first, but give it time to let the herbs and dried orange peel shine through. The 2010 seems to have something special in the scaffolding that will help it lay down for several more years, making it a nice bargain at the moment.

Best of Show White
Baileyana 2010 Chardonnay, Grand Firepeak Cuvee (Edna Valley, $28) – Great example of why Big Chard got popular in the first place. Like Heather Locklear, it’s had some work done but is still sexy as all hell. 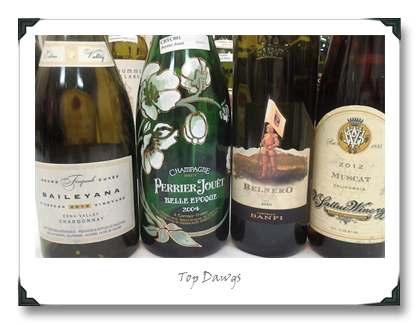 Best of Show Sparkling
Perrier-Jouet 2004 Belle Epoque Brut (Epernay, France, $165) – What do you want me to say here? At that price, it ought to kick the sh*t out of the rest of the competition (I loved it when I reviewed it in 2012).

Best of Show Dessert
V. Sattui 2012 Muscat (California, $25) – This one has nice balance overall between freshness and sticky-juicy-sweetness, and even some pretty floral aspects. Another example of why we should be going outside of Italy’s now-over-produced offerings to find the better Muscat examples. Sigh… 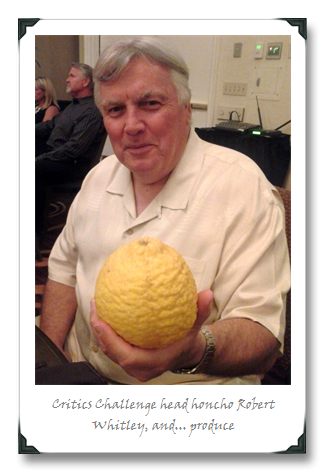 And a few more that didn’t make the Best of Show cut, but I thought came damn close and wanted to give them some extra special luv: 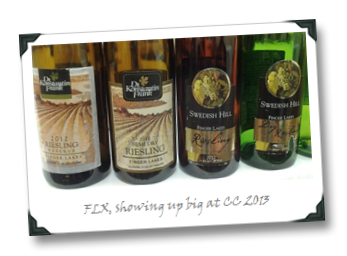 Limes, vibrancy, and spunkiness, this is a nice introduction to what the region is all about right now. The Finger Lakes generally kicked ass in the CC this year, garnering quite a few medals. Another example of why the Finger Lakes region hath arrived. 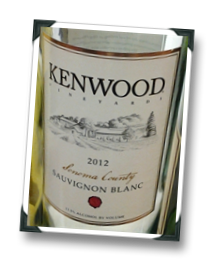 What kind of spicy, vivacious bargain is this? The kind of wine that we geeks tend to overlook entirely, but shouldn’t. Kenwood hasn’t always been the most consistent of SB producers, but in good years (like this one) the wines can outperform their price point.

And finally… what were among my two favorite wines over the entire weekend: 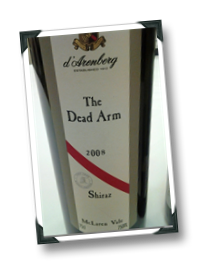 This one wowed most of the judges (myself included, though I liked the following wine just a hair better…). This has just about everything that you could ask for from Aussie Shiraz: herbal spiciness, complexity, depth, power, pizazz, attitude, and the ability to charm geek and newbie alike. 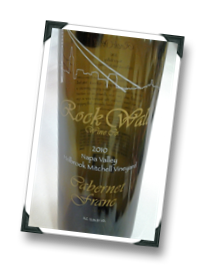 Why Cab Franc from California has been beguiling me at competitions this year I’ve yet to figure out, aside from the fact that Cab Franc is Chuck Norris levels of awesome as a wine grape. This wine is extracted, and big, as in big-like-a-pickle big. But it also carries those fantastic CF fingerprints; pepper, herbs, a stance that says “I don’t care if you like me or not.” But you will, and it knows it. Some may find the juxtaposition of its lushness with its herbal qualities a bit odd, but those people can just not buy it and leave more for the rest of us.

4 thoughts on “(Surprising) Results Of The 2013 Critics Challenge”