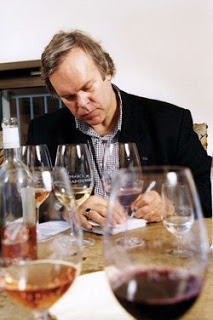 You can all stop picking on Robert Parker now.

The oft-followed and just as oft-maligned wine critic extraordinaire is doing you a favor.

A favor if you, like him, have a wine palate that tends towards the bombastic, that is.

A great post on the science of wine tasting over at Catavino.net (and how that science can be manipulated) got me thinking about the subjectivity of wine critiquing in general, and more specifically on the philosophical question: Can wine tasting can ever be totally objective?

So for this topic, you can view this article as the yin to Catavino.net’s yang. The conclusion of all of my philosophical pondering? All y’all need to cut Robert Parker some slack!

To bolster my exclamatory claim, let’s turn to the (not too difficult) task of finding someone smarter than me to explain it…

According to Tim Crane’s essay in Questions of Taste: The Philospohy of Wine:

“A wine cannot be appreciated for its intrinsic value unless it is drunk; the value of the wine is intimately related to the kinds of experience to which it gives rise.” In other words: the trouble with appreciation is that you need to taste wine to appreciate it (well, I suppose for some of us it’s not really too much trouble). And because tasting itself is such a subjective act, it suggests that wine tasting is also at least somewhat subjective.

Does our tasting subjectivity preclude us from coming to some general consensus of how a wine tastes, or its relative quality? Probably not. Throughout history, what was generally considered “good” wine has changed substanitally. In another essay from Questions of Taste, Barry C. Smith puts it like this:

“Saying that the experience of tasting is a personal one need not prevent us from saying that it acquaints us with how a particular wine tastes, or from supposing that other people can be acquainted with that taste too.”

Man, I am really digging smart philosophers right now! What does all of this have to do with wine critics like Parker? It suggests 2 things:

There are studies that back this up. Vinography.com recently reported on two such efforts that compare wine reviews by major wine critics (including Parker, of course) – with different taste preferences. These critics have been in very close agreement on which Bordeaux wines have been the best, and they’ve been agreeing for decades. So there’s gotta be something to the “collective” wine palate as well as to our individual, subjective ones.

Back to Questions of Taste – also from Smith’s essay:

“Having the ability to asses and describe wines in one thing; having certain personal tastes is another. That we, and the wine critics, have personal tastes does not imply that all taste is subjective... Wine critics understand that they cannot overrule an individual’s personal tastes… The moral is that we must find the right critic to advise us, the one whose personal tastes or preferences are more nearly aligned with ours.“ Now give Parker a break. He’s just trying to help out the people who like the fruit bombs. Including himself.