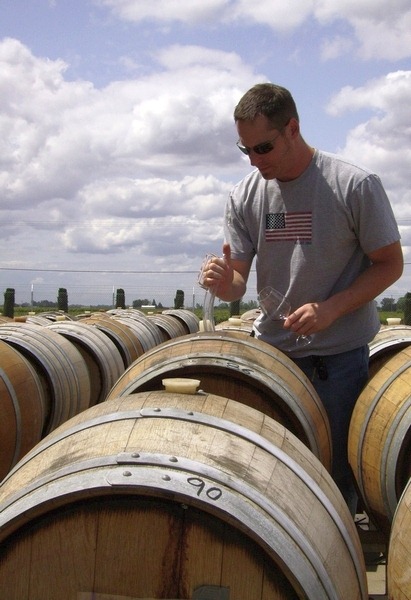 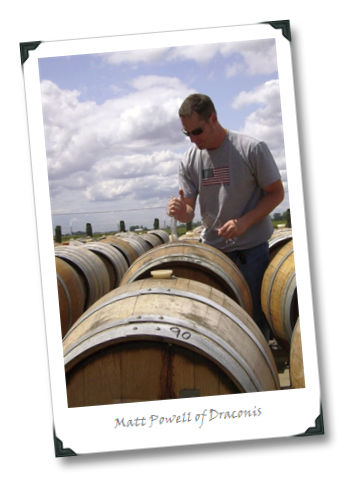 1WineDude: What do you think is the role of the winemaker today?

Matt Powell: Not to be a total a**hole, and to remember that it’s the process of turning the juice into wine that matters most.  It’s easy to overthink it. Its easy to add sh*t to it.  It’s easy to screw it up.  But it’s really, really hard to just leave it alone.

There are so many tools in the winemakers kit today to modify, blend, and change the fundamental process that todays wine often loses its … character.  Filter, filter, filter, rack, rack, filter some more, throw in some sulfur and get a good score …right?

Wine evolves from the process and needs to grow.  Often I feel winemakers, as good as some of them are (and you know who you are), by their very nature, are bound to create wine for today’s market; it’s all about turning the inventory and giving the customer some uber-high residual sugar blend with a really cool name …like “Flaming Porcupine blend … a mix of 18 different varietals grown in the mountaintops of Iceland, next to the volcano where sulfur naturally occurs, giving the wine its unique nose and protective features” …hey that sounds cool… I’d buy it (*sarcasm*).

Really though, I feel like the modern wine industry has lost its focus, that winemakers’ hands are constrained by corporate policies and shelf-life.  Now, don’t get me wrong; I totally understand it, and yet totally hate it at the same time. Sh*t, there’s nothing i can do about it except to try and play a different game myself.

I mean, like, what would Captain Kirk do?  I’m certain he’d take a different approach – but he’s smart enough to know that it’ll take the customer to force change in the industry and to the winemaker.  They just have to listen.

Ultimately, the winemaker has a responsibility to get back to the roots of wine.  Step it back a few generations and take a note from history.  Let the wine process evolve; don’t change it with equipment, chemicals, and blends. Try really hard to leave it alone making only the minimum necessary adjustments while listening to your customers’ desires.  Idealistic and unrealistic as that sounds, that’s what I believe and whatIi stick to.  Maybe someday, we’ll get there and the customer will have a much better selection of wine to choose from.

1WD: Is there really such a thing as non-interventionist winemaking?

MP: Probably not.  I have a hard time envisioning a completely non-interventionist winemaking process – I mean, there are things you have to do… that you just don’t want to leave out.  Like adding Sulfur; you need the sulfur to neutralize microbial activity – without it, bacteria and other microorganisms will hands-down ruin your wine.  This is especially true when taking a minimalist approach to the wine like I do … no filtering or fining means that the all the ‘character’ of the wine remains; but to stabilize the product i have to hit it with sulfur.  So in one respect, being almost non-interventionist certainly allows the wine to evolve in a livelier way, but on the other hand, it also does require that certain actions are taken to retain quality in the product.

1WD: Are there certain things that are “off limits” to you, things that you just won’t do to adjust or correct a wine under any circumstances?

MP: Oh yeah.  I learned the hard way that I won’t add adjust the acids of my wines.  I also ferment to complete dryness.  I’m not a big fan of the over alcoholic “bold” residual sugar-based wines and prefer a more refined and elegant end result.  Lots of people have suggested I leave half to 1% RS in my wine, but I won’t do it … I feel like it covers up what the wine is supposed to be.

1WD: Do you think the technical tools offered to winemakers today do more good than harm?

MP: A difficult question to answer – I feel that technology has its place in the wine process; for instance, without technology we wouldn’t have modern cultivated yeasts or required additives like DAP; this in itself, has helped wine become better over the last 30 years.  However, I feel there are winemakers out there that depend too much on technology to guide them and end up doing more harm than good.

A lot of times, the wine may be technically correct but doesn’t have … life; no character or personality.  Tinkering with the process may fix one factor (like the acid levels), but it’ll certainly throw the rest of the wine off simply because the fruit arrived in a certain way.  That is, the fruit showed up in its optimal state as dictated by its microclimate.  Adding extra acid will automatically change the ratios of the other goodies in the juice…  So, I guess to answer your question and in my own opinion, technology should be used as an accent, nothing more …unless your making a million cases – then you’ll need robots to make your wine…

For the price, this wine is pretty much unbeatable.  Draconis pumps out a spicy, meaty take on Petite Sirah that is utterly without pretense – and it’s about as faithful to the variety as you can get while still managing to offer up a wine that feels complete, and doesn’t drop off precipitously in its middle stanza. It’s also a drop-dead sexy wine in its deep, dark, midnight-blues-infused color and silky but not flabby mouthfeel. PS, with no BS indeed!

The QPR on this wine is ridiculous. A wizardly-crafted, wicked combo of deep, dark-berry fruit, spices, and sweet oak. Normally this amount of oak could feel off-putting to me, but here one gets the clear impression that a few years in the bottle will integrate that fruity/spicy/oaky core into something wonderfully hedonistic and even more supple than it is now. If you must open it early, please do so with a full rack of ribs and about an hour and a half of pre-dinner decanting time booked in your schedule.

Both tasted as samples.

26 thoughts on “Signs Of Life: What It Takes To Make Wines Of True Character (With Matt Powell of Draconis)”