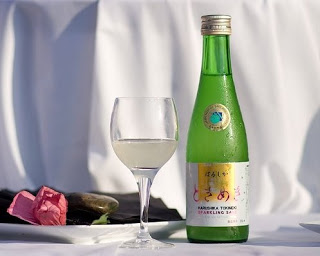 When it comes to me and Iron Chef Takao Iinuma, well, we’ve just got to stop meeting like this.

Because that guy is so skilled, he’s going to ruin me for all other Japanese cuisine. With the exception of cuisine in Japan itself, presumably.

I’m not going to recap the food from my recent sake tasting at Iinuma’s fabulous Azie restaurant in Media, PA. I’ll let my good friends over at WCDish.com do that. You can read up on the details of the Azie tasting in my previous post shamlessly plugging the event.

But I will tell you about the sake I had the pleasure of tasting that evening. Because it’s gone a long way into making me a convert in the temple of all things sake. And a yummy, tummy-warming temple it is… What’s great about events like the Azie tasting is the high probability of running into other ‘foodies’. In this case, I had the pleasure of hanging with Christine Olmsted of Teikoku, Mary and Sugendran of WCDish.com, and Gino Razzi, the Penns Woods winemaker who is starting to skae things up in the world of east coast wines (see inset pic of Gino, me, and Mary). Of course, it also doesn’t hurt that one of the best chefs in the eastern U.S. is whipping up the fare, either.

The sake samples on display at Azie were selected by Matt Palmer of Star Cellars. the man knows his sake, and since I am a complete sake novice, I took advantage of the opportunity to bend Matt’s ear and ask him a seemingly endless serious of questions about each sake, and the process of making sake in general. Sake is often referred to as “rice wine” since at its most fundamental it is an alcoholic beverage made from rice. However, the process used to make sake is actually somewhere between those used to make beer and those used to make wine. Specifically, sake is made with a special type of rice with a high starch content, with a mold called koji used to convert the starch into sugars that can then be fermented into alcohol. From there, many techniques are used to create sakes with different characteristics. Like wine and whiskey, sake from different areas of Japan are noted for their distinct styles. You can learn more by checking out Sake.com.

The samples that we tasted at Azie really show the depth, range and breadth possible with sake. We started with an accessible, fun & sweet sparkling (yes, as in ‘with bubbles’) sake, and ended with the complex, powerful, and deep “Mountain Flowers” – a drink that requires (and deserves) as much concentration as a decent Burgundy.

As for the specifics on the sake that we had for our pairings at Azie, I’ve reviewed them in ‘mini’ form on twitter, and included the wrap-up below:

If you’re new to sake… let me tell you, you need to give this stuff a fair shot. Because it is definitely going to surprise you.

Consider this oenophile a convert.