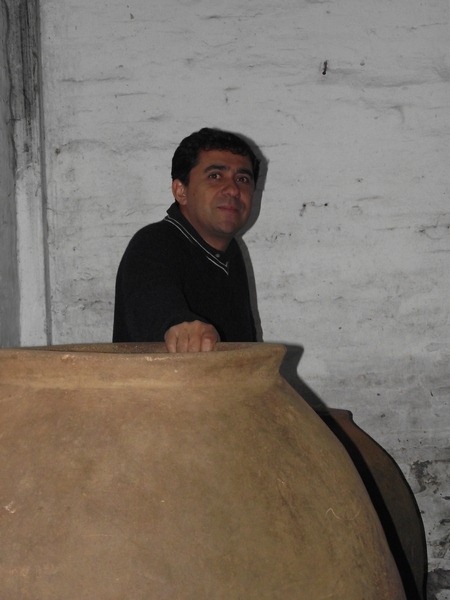 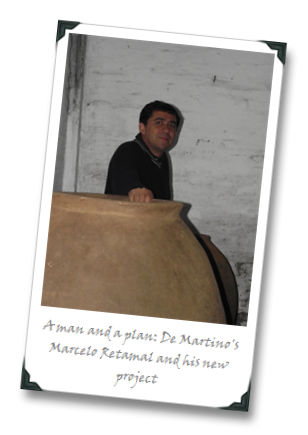 Hearing those words, from winemaker Marcelo Retamal in a barrel area that is little more than a small warehouse on the Isla De Maipo estate of De Martino, surrounded by support beams that have been twisted and broken like so many toothpicks, and overshadowed by a ceiling that looks as though parts of it could drop on top of our heads at any moment without warning… well, let’s just say I was hoping that whatever gods dole out the karma points were forgiving me for my initial reaction of “Well… f*cking DUH!”

In California, I’d have had to sign a 37-page waiver just to look at this building, and here we were traipsing about inside of it without even wearing hardhats. But this dark-haired, olive-skinned, brown-eyed winemaking guy had me totally at ease despite the less-than-secure surroundings.  Marcelo carries an almost ego-less assurance in his laid-back manner, no doubt a side effect of his fifteen-year tenure at De Martino (one of the longest stretches in the modern history of a country where most winemaking staff turnover is closer to 15 months than it is to 15 years).

De Martino’s current barrel aging area is, of course, a victim of the February 27, 2010 8.8-magnitude earthquake that in other regions of this long, thin country, had squashed enormous stainless steel tanks of wine as if they were empty beer cans at a college fraternity party. Our visit trails the devastating March 11, 2011 earthquake in Japan by only a few days, and the resilient Chileans feel a kinship to the Japanese quake victims that is mostly unspoken but still palpable whenever the topic of The Quake comes up (though it doesn’t take a shared disaster for one to feel the emotional impacts of the devastation near Tokyo: one report, which told of parents finding the bodies of a class of Ishinomaki kindergarteners huddled together after their school bus was engulfed in flames triggered by the recent earthquake’s resultant tsunami, had me privately shaken and withdrawn). Chileans are a forward-looking bunch, and are quick to talk about The Quake, a situation in almost polar opposition to the way that they seem to avoid direct talk about their political past, referencing it only in the abstract (Augusto Pinochet is never mentioned by name, sort of like how Hitler never ever comes up in conversations in Germany).

We’re not here to look at barrels or taste aging samples, though.  We are here to look at Marcelo’s clay amphorae.  The ones in which he (almost crazily) plans to ferment and age País (the grape of low-end boxed wines) from the cooler Itata region in the south, using carbonic maceration and adding as little sulfur as possible, burying them in the ground à la how they used to do things in the Jura in Spain… 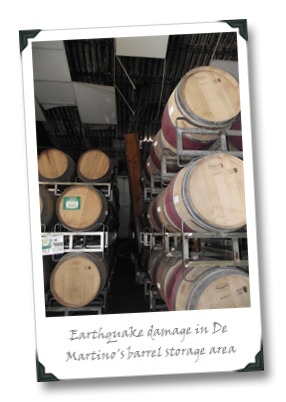 “I’ve tasted some experimental wines made in similar ways by others, and I think it can make very good fine wine” Marcelo told me.  “We want to make the wine in as natural a way as possible.”  The idea is to make a fresh Summer-sipper, maybe even with a hint of spritz – a modern wine with a nod to the past.  This doesn’t sound as crazy as it really is until you consider that Marcelo’s plan is completely unlike anything De Martino has ever done.  And until you add in the fact that he only has two amphorae right now, and he wants several cases of the wine ready to sell in 2011.

Things get riskier from there.

Marcelo isn’t too concerned about the state of the damaged barrel area at De Martino because, in an even riskier move than his buried clay jars idea, he plans to get rid of a lot of barrels, replacing them with the huge Austrian oak casks that were once quote commonly seen in Germany and Italy.  Why?  Because he’s sick of oak and wants to make food- and restaurant-friendly wines.

“We decided in 2011 not to buy any more barrels.  I’m convinced one of the problems in the wine world today – in the most expensive wines – is standardization” he told me.

“Same enzymes. Same French oak barrels; same medium toast.  Same yeasts.  You try Napa, Italy, Bordeaux… it’s all the same.  Over-ripe styles… many journalists give these wines high scores.  But if they’re over-ripe, you lose the personality of the grapes.” As far as trying to win those high scores from wine mags, he more-or-less shrugs the notion off completely.  “The wine is for the consumer; if you get a trophy, well then that’s nice.”  The less-expensive line of De Martino’s wines will still have a more traditional oak treatment, but the program will be reduced in the amount of oak used and the time the wine spends in it. 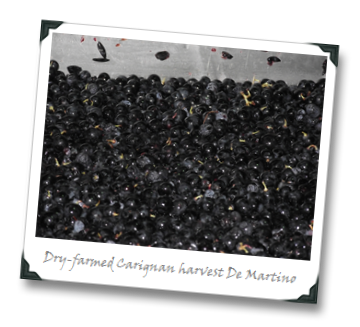 If all of that isn’t risky enough for you, Marcelo is insisting on leaving as much of their fruit (estate and purchased – they work with upwards of 30 different growers) on original, ungrafted vines as possible.  “We have a huge opportunity to create wine in Chile on original rootstock, to express the place.  This is very rare.” Adding to the expenses, the estate fruit is certified organic, and the company buys carbon offsets to help get them to a carbon-neutral state.

I asked if this all sounded to him the way it sounded to me: risky, bordering on insane, especially given the current fine wine market.

His answer: “Risk is the business. If you have a lot of nematodes in your soil, then plant apples, not grapes!” 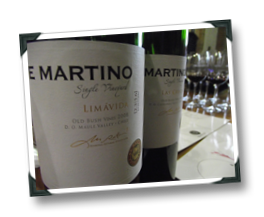 If it’s expression of terroir that Marcelo is after, he has largely already nailed it in De Matino’s line of Single Vineyard bottlings.  Prior to this visit, I hadn’t tasted a drop of De Martino wine.  I was, to put it bluntly, astounded at the qualit.  Marcelo has managed to achieve what many winemakers talk about doing but few actually deliver (especially in Chile, where much good wine is produced, but not enough great wine – wine that actually expresses a sense of place): minimal work in the winery, so that the real expression of actual terroir can come through into the glass. These are wines that would sell for gobs more money if they came out of Napa.

When I visited, dry-farmed Carignan grapes were coming in, and (again, sans hardhat or paperwork) I worked my way into the production line to check them out; they tasted great, full of sweet, concentrated dark fruits and topped off with a tea leaf character.  That fruit finds a final home in a kick-ass “El Leon” bottling that needs probably about eight years to soften up – but I’m not going to talk about the El Leon except to mention that as kick-ass as it is, there are three other SV wines from De Martino that are even better, and offer astounding value at $40:

A true field blend, in that the vines, planted around 1945, are not organized by variety and De Martino isn’t sure what some of the grapes are, but they are sure that it’s mostly (70%) Malbec. Yes, Malbec from Chile, not from Argentina.  And it’s a stunning representation of place – an actual, honest-to-goodness achievement of terroir – at a fraction of the cost of what that kind of wine will normally run you. The Limávida starts with a ton of spices, a slight earthiness, and it just gets more complex from there.  Mexican cocoa, mint, stone, dark plummy fruit so densely concentrated it’s like looking into the eyes of some wise old sage that you met on the street, and he whispers something odd and profound like “god gave you the nod… now you understand the mystery” and then your mind gets totally blown. The finish is structured, long and savory, and the wine changes on you at a moment’s notice, alternatively showing you its full potential and then shutting down completely for several minutes at a time (attention impatient tasters: you will not “get” this wine).  It will easily age for a decade, and if you’re patient when tasting it you may just be rewarded with one of the most exotic but fulfilling red wine experiences you’d ever hope to encounter in this price range.

Another field blend, again mostly Malbec, from vines planted in the mid 1950s.  This wine is the full package: tobacco-smoky, meaty, chocolaty, juicy, dark-plummy, silky, and more “conventionally” structured than the Limávida – which basically means that the tannins are rounder and more approachable now.  Think of this as the friendlier, smiling but still very serious younger brother to the brooding, temperamental Limávida.  Focused, expressive, and sure to be empty at your dinner table in before-you-know-it timeframes.

There’s 15% Petite Verdot in the mix of grapes that come from a vineyard at almost 2,000 meters in elevation (so much for the “valley”) and are harvested without the aid of machines. It’s wine of deeply concentrated red and blue fruits, evocative of place but also smoky, chewy, and with more smoked meat than you’d find at a Southern BBQ roadside stop. But it’s so elegantly put together that you’ll swear that BBQ cook is wearing a cocktail dress.

5 thoughts on “Risk Is The Business: Earthquakes, Amphorae and the Quest For Terroir at De Martino”