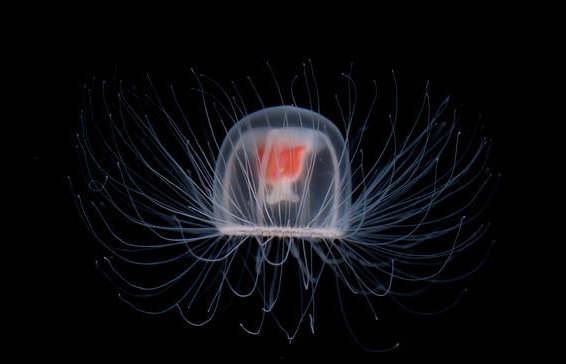 Sometimes, the wine business is a very, very small place. Also, I am about to talk about jellyfish. You’ve been warned…

While in San Francisco recently for the SF International Wine Competition (more on the results of that in a couple of weeks), I caught up with wine marketing maven Tim Martin. Longtime 1WD readers might recognize Tim’s name from way back in 2012, when apparently (according to Tim, anyway) I was the first person to write about Tim’s Napa Valley project, Tusk. “We’ve got a ten year waiting list on Tusk now,” Tim mentioned, which I suppose is much more a tribute to that brand’s cult status, and the prowess of winemaker Philippe Melka than it is to my influence. I mean, as far as I know, even my mom doesn’t read 1WD.

It turns out that in the five-plus years since we last met, Martin has been busy lining up another potential cult classic, and this one already has some connection to previous 1WD coverage – it happens to be the next iteration of Hidden Ridge, which even longer-time 1WD readers might recall from when I visited that stunning Sonoma estate, on the very edge of the Napa Valley border, back in 2010. At the time, I marveled at why the prices for their reds were so low.

After Hidden Ridge patriarch Lynn Hofacket – who planted the vineyards on the steep hills of that estate (some of which literally match the great pyramids in slope percentage) – passed away, his wife Casidy ward eventually (though not without some trepidation, as I’ve been told) sold the vineyards to what would become the team behind what would become Immortal Estate (Hidden Ridge winemaker Timothy Milos remains a part of the team).

It was Hofacket’s passing, which nearly coincided with the death of Martin’s father, that became the genesis of Immortal’s brand name. “I started to think about legacy, and what we leave behind” Martin told me, and he noticed that Wine Advocate’s 100-point review of the 2013 Hidden Ridge Impassable Mountain Cabernet included the phrase “This wine is nearly Immortal.” And thus, a brand (or, at least, the idea of one) was born.

Which brings us to the jellyfish…

Immortal Estate’s flagship Cabernet Sauvignon has a jellyfish on the label. Not just any jellyfish, of course, but the small Turritopsis dohrnii, which possesses the Medusozoa equivalency of near immortality. There’s no good way of explaining this, so I’ll point you to an excerpt from www.immortal-jellyfish.com:

Turritopsis dohrnii is now officially known as the only immortal creature. The secret to eternal life, as it turns out, is not just living a really, really long time. It’s all about maturity, or rather, the lack of it. The immortal jellyfish (as it is better known popularly) propagate and then, faced with the normal career path of dying, they opt instead to revert to a sexually immature stage.

Sexual immaturity? Forever? That’s not exactly a wine marketer’s wet dream, but check out how the innards of this nigh-undying look to the human eye; namely, almost exactly as if it’s carrying a wee little glass of red wine:

Now, that kind of is a wine marketer’s wet dream right there.

One of my first questions to Martin, because this is the kind of guy I am, is why, if the vineyard site and winemaker are the same, should anyone feel compelled to pay three-to-four times the Hidden Ridge asking prices for Immortal Estate. Martin’s answer was obviously well-considered, and just as obviously wasn’t marketing fluff: “Lynn just didn’t have the same resources to elevate the farming practices as we do.” 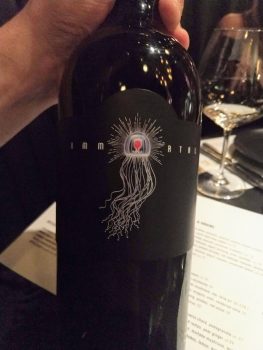 In other words, Immortal’s Randy Nichols has the funds to farm their unique vineyard site to its fullest potential. And personally, I think you can already taste it.

Available by acquisition only because, well, cult wine. Densely packed, in terms of palate weight, complexity or aromas, and intensity of mouthfeel, this is immediately identifiable as a Napa Valley styled classic, but of course in a blind tasting we’d all get it wrong since it’s technically from Sonoma. Cassis, pencil lead, cocoa, dried herbs, black and red plums… the stuff just keeps coming and coming.

Interestingly, while this is drinkable stuff now, the palate has hints of reservation. There are nice laces of acidity through the leather of the tannins and the density of the fruit, but it’s the tannin action that has the most depth to it. Deceptively so, however; those tannin chains are nice and long, so you’re getting a silky experience now, and so it’s easy to miss just how much structural scaffolding is built into this puppy. The tannin Force is, indeed, strong with this one; and it has many, many, many years of excellent drinking ahead of it.