Last month, I was away in Mendoza playing Team America as an International judge in the 2013 Argentina Wine Awards. The AWAs were followed by a seminar that centered on the topic of how to reach “next generation” (Millennial) wine consumers. Today, I’m going to focus on the Trophy results of the AWAs – but believe me, a lot more is coming on the seminar and the topic of Millennial wine drinkers (including thoughts on the wines that my co-judges believed appealed to those next gen drinkers) later. 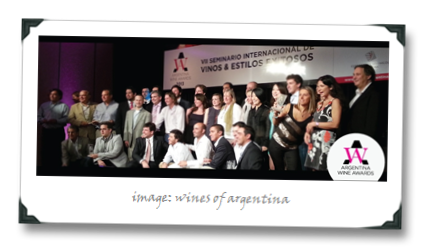 I’ve two main takeaways from the 2013 AWAs, which are organized by Wines of Argentina (who footed the bill for my participation) and Hunt & Cody (a UK-based team consisting of MW Jane Hunt and Tina Cody):

1) I was self-conscious just to be in the same room as the rest of the judges, all of whom I felt outranked me in terms of tasting prowess, winemaking knowledge and industry accomplishments (I feel privileged to have made fast friends with many of them), and

2) If you try to taste thirteen Gold Medal winning Malbecs in only a few minutes and rank them in order of preference so that a Trophy winner can be determined, you will destroy your palate’s ability to taste anything (including coffee, tea, air, water and, I suspect, crude oil) for several minutes afterward.

The entire process of judging was incredibly fun (despite being shut up in a large conference room in the Diplomatic hotel while the sun was raging all Summer-style outside our windows), and enjoyed seeing the different tolerances we all had as tasters. For example, the UK judges putting up with more Brett (having ben schooled on Old World / Western European wines), the Chinese judge having a higher tolerance for oxidation (because so much international wine reaches her only after it’s been impacted by oxygen), the Argentine winemaking judges almost universally accepting high levels of VA (sought after to smooth out the mouthfeel of those tersely tannic Malbecs).

As for yours truly, receiving boatloads of California samples has taken its toll: I clearly had higher tolerances for oak influences and riper fruits. Sigh… 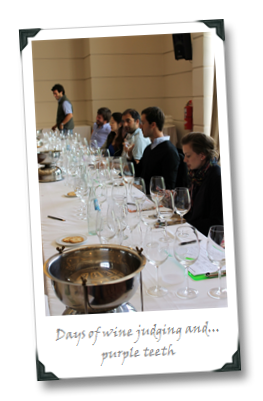 Below you’ll find a list of the Trophy winning wines from the 2013 AWA (those that were deemed Gold Medal and re-tasted later to determine if they should be awarded special designation for being particularly outstanding within their price brackets). Fine examples of S. American vinous goodness all, but you’ll also see from the screenshot of my individual scores for those wines that I was a tough grader (there are only 12, as my judging team only tasted half of those wines during the competition). I was forced to use a numerical grading system, under slight protest, and can tell you now that the 20-point UK point system sucks as much donkey bong as the 100-point U.S. system.

Overall, we tasted nearly 750 wines (!) in about two days, with 24 wines awarded Trophies, 49 Gold, 242 Silver and 314 Bronze (79 went home with no award). We tasted a lot of very good Malbecs (duh), but also some exceptional Sauvignon Blancs (that was a surprise) and many svelte and pithy Torrontes (another surprise for me – we seem to get a lot of flabby-ass Torrontes in the States). Finally, Cab Franc, Cab Sauv, and Bonarda seemed, to me, to largely disappoint (though the earlier two I think sow promise, and just need to find the right soil and elevation combinations). For my money, the 2012 Aguma Sauvignon Blanc is a right steal at under $15, and was a real star of the entire lineup of wines over those three days. Same thing for Zuccardi’s Soleria, a fortified Torrontes that is made from a solera barrel system that’s kept outside in the Mendoza heat, a pet project of the infectiously energetic Sebastian Zuccardi: 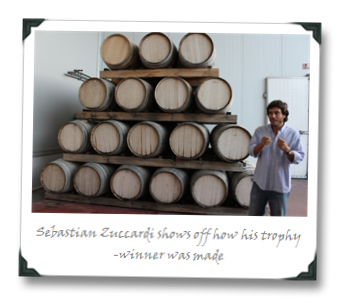 It’s tough to discern what the AWAs “mean” to the Argentine wine business. I got the feeling that we were a tough bunch – consider this quote from the WoA folks: “Without a doubt, having a panel of judges comprised of prestigious winemakers, journalists, bloggers, sommeliers made the 2013 AWA edition one of the toughest. The recognition from this first-class panel is of paramount importance for our wineries and adds a special flavor to the contest results.”

Generally, the feedback I got on the question of what the AWAs mean (and I posed it to pretty much anyone who would listen) is that for the bigger players (and there are clearly many big players among the trophy winners) this is just another prize for the shiny case, another piece of marketing material to help sell their juice.

There are some (very!) small producers who walked away with trophies… and for them, these awards are a pretty big deal. I watched the three ladies who do pretty much everything for making the ultra-small production Vida y Alma Malbec themselves – and who speak almost no English – walk around almost in shock that their little wine had done so well. Seeing them being congratulated by representatives of the other (much!) larger-production winners was poignant and funny… Ladies, you’re in the big leagues now!

So… don’t lose all heart if you’re not a fan of some of the big boys who show up on this list – the proof is in the glass, after all, and worst case is that you’ve got a few potential go-to budget producers that you might want to take a second glance at now. In any case, it took a lot of people a lot of work (not to mention an insane amount of staining of teeth) to bring this list to you… enjoy! 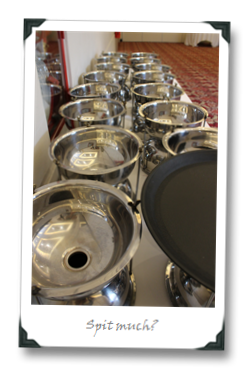 7 thoughts on “Results Of The 2013 Argentina Wine Awards”