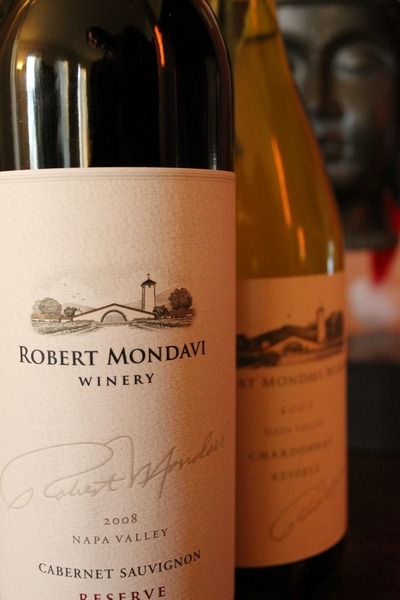 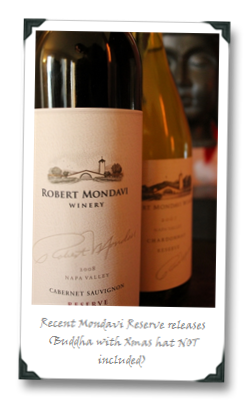 For all of my talk about not digging big-ass wines, I sure do seem to end up talking about a lot of “good” big-ass wines.

Take this past Christmas, for example.

We host some extended family every third Christmas or so, as part of a rotation that has us visiting Florida and Washington on the other years. And when we host Christmas, we cook a gourmet meat-and-potatoes feast in honor of a late grandmother, who succumbed to Alzheimer’s quite a few years ago but in her heyday apparently made a mean roast dinner.

The slow-roasted meat naturally gets me thinking about a big red, and for some reason, despite reservations, I find myself continually reaching for Mondavi Reserve wines for this holiday dinner thang. I mean, if Christmas dinner isn’t when you’re supposed to open up wines like these, then well the hell are you supposed to pop those corks?

I use the term “despite reservations” because, truth be told (don’t you hate that phrase, by the way? I mean, it’s not like I’ve been lying to you for years and am only now getting aroud to making statements with any veracity… ok, whatever…) I am always afraid that the Mondavi Reserve wines are going to burn me…

But even so, the RMW Reserve has gotten a bit big even for its own over-sized britches in recent vintages, and in my view had hit dried-prune, high-octane levels that signaled the end of their being worth the relatively exorbitant, well-over-$100 price tag (the 2006 displayed particular largesse in its largeness). When the heat of those wines is really on, and when it’s enough to all-but-overshadow that killer To Kalon vineyard fruitiness… well, that’s not a recipe for success, folks. 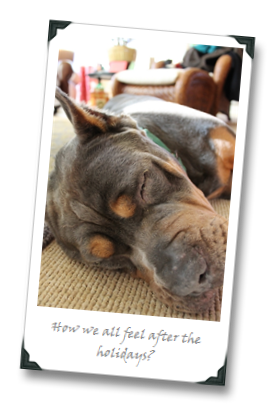 Generally, I was quite pleasantly surprised at the RMW wine samples that I decided to crack open for the meat-and-potatoes holiday meal, once again proving my anxiety to be a useless waste of (what many might consider a not-considerable amount of) mental energy…

Just barely making the Cab label designation at 85% (rounded out by nearly equal parts Cabernet Franc and Petit Verdot for the remainder). Winemaking director Genevieve Janssens and crew are back on track with the 2008 Reserve Cab. Bottom line is that they’re sitting on fruit (from To Kalon and elsewhere in the Oakville Bench) that’s as good as it gets in the Valley, so we should expect the wine to be very, very good. And it is.

This is fine wine luxury for the Starbucks enthusiast – the more you like your mocha, the more you will probably dig this Reserve. The dark berry fruits are as deeply black as the anti-soul of Christmas Consumerism, but the tannins are silky and supple – enough so that the 15.5% abv didn’t seem like a hindrance. For my money, I loved what the wine was trying to tell me long after it calmed down in the glass, which is that it also had olive, sage and tea leaf aromas to share (and to spare).

Certainly the most reserved of the RMW Reserves I’ve had in several years. And it feels so odd to type that, given this wine got the full-on malolactic, barrel-fermented, sur lie aging treatment. But then, this big Chardonnay is everything that’s good about big Chardonnay – supple, luxurious, trying to compete with crème brulee for your attention, but all the while maintaining a sense of Chardonnay’s humbler crisp apple flavors, acidic backbone, and lemony goodness. I liked it enough at the price point to consider trying to find a second bottle to see how it might develop given 4 or 5 more years. Chablis it’s not, but if you were buying a bottle of RMW Chard expecting it to be Chablis-like then you need your head examined.

This wine isn’t part of the RMW Reserve lineup, but gets the “honorable mention” nod from my Christmas day tasting (which included several other wines not paired with our holiday dinner). Lush, plush, silky, deep and velvety as your favorite pillow; several layers of splendid black fruits, along with real depth and hints of spices (courtesy of 4% Cab Franc, and over a year of barrel aging)… this really is how Oakville Cab ought to be, people: round in your mouth, warming to the soul, and unabashedly concentrated and fruity.  Please note that I did not say that all Cab should be unabashedly concentrated and fruity; we are talking about Valley floor Cab, here. Anyway, I set this bottle out for our guests, I blinked, and it was gone…