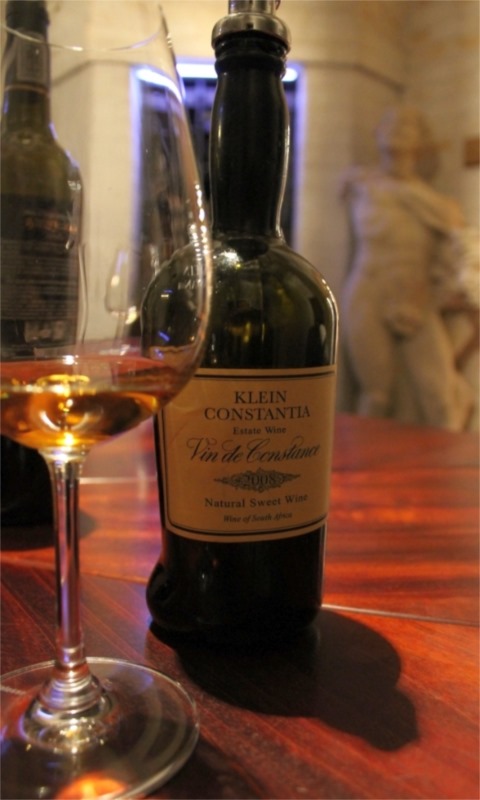 “This would be impressive, really, if you could see any of it.” 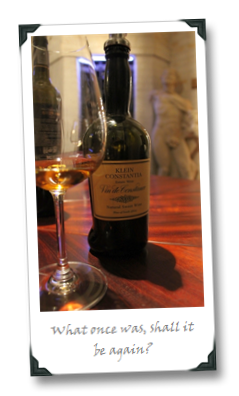 We’re driving through a winding, makeshift “road” of mud and ditches in the hills of Constantia. I’m wincing in sciatic pain with every bump, which come approximately forty nanoseconds apart courtesy of the damage done by a South African winter of intense rainfall and flooding. The impossibly young winemaker Matthew Day is my guide on a day in which the clouds have decided to settle almost directly on top of Klein Constantia’s mountainous estate vineyards.

It doesn’t help that I’m also having panic attacks with almost as much frequency as we’re encountering those bumps, thanks to what the orthopedist told me about my blown-out lumbar disk, just before I left for South Africa: “you should be okay to travel… but if your ankles roll, or you loose control of your bowels, then that’s a medical emergency that will require immediate surgery.”

Loose control of my bowels?!??? This is NOT what you tell a borderline-hypochondriac who’s prone to anxiety attacks right before he’s about to get on a plane for two days of non-stop travel!

There’s a point to our vineyard tour, which we have to abandon early due more to the poor state of the muddy roads than to my physical and mental issues. Day looks out at the wet mist; “our goal is to farm here for the next three hundred years, and we only have this soil to do it; so we’re trying to get away from the ‘old style’ of farming.”

The “old style” – spraying pesticides, conventionally farming – is about the only “old” thing from which Klein Constantia is attempting to move away. Otherwise, the focus is to restore the quality behind a name that was once synonymous with the greatest wines in the world…

At this point, we need to summarize approximately 330 years of history, which I will attempt to do in less than 200 words: 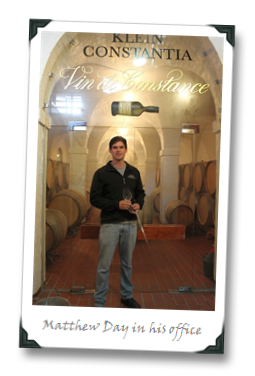 Klein Constantia’s winemaking history goes as far back as one can for South Africa, and that’s pretty far back. And pretty specific, too: November 20, 1684, when Simon Van der Stel claimed this area near False Bay for his own. The estate went through a series of successions and divisions through the early 1800s, when Groot (“Big”) Constantia and Klein (“Little”) Constantia were formed. Along the way, Vin de Constance – Klein Constantia’s unique dessert wine, and the reason for my visit – becomes famous enough to be mentioned by Jane Austen, Baudelaire, Napoleon Bonaparte (the latter of which is rumored to have requested the stuff on his deathbed), and much later in Fifty Shades of Grey (“people ask for the fifty shades wine!” Day exclaims when talking about the tasting room visitors; oh, the shame!). Phylloxera killed Klein Constantia’s wine production in 1865, after which the estate saw various ownership and didn’t produce wine again until Duggie Joost bought it in the late 1970s, and began releasing wine under the estate’s name in 1986. Since 2011, Klein Contantia has been part of Anwilka Vineyards and has acquired an impressive list of shareholders with deep wine backgrounds (and even deeper pockets).

Okay… back to The Cape…

Where were we? Ah, yes, abandoning the rainy vineyard tour. And so we decide to head to the barrel cellar, where the real action is anyway. “As the guys in the airport bathroom says,” intones Day, opening the large double glass doors in Klein Constantia’s basement, “’welcome to my office!’” 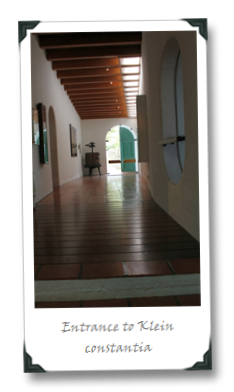 Day has been on the KC winemaking team since 2008, taking over head winemaking duties in 2011. Despite his youth, he doesn’t come off as wet-behind-the-ears in wine terms, having done stints at Elderton, as well as in Tokaji, Sancerre, and Napa.

We taste through tank and barrel samples, and I realize that I’d like the cut of this young winemaker’s jib, if I knew what a jib was. He’s fond of experimentation, and is locked in a battle with KC’s brass to keep their svelte, textural and über-geeky Riesling alive. We taste a bizarrely fascinating tank sample of 2013 Sauvignon Blanc that he made in collaboration with Jaboulet, to which they did “basically nothing” according to Day: pressed, oxidized, and allowed to go “dirty” with natural fermentation. It’s dense, vibrant, tropical, and weird. The Sauvignon Blanc on the cool, sea-influenced site seems to have Day the most excited, and tasting this raw example helps me to grasp why; if they can make it this interesting by doing nothing, then the cleaner juice ought to be pretty interesting, as well.

Finally, we get to the end game, the Vin de Constance, the Real Deal. 2012 was day’s first vintage as head winemaker, and we sample it from the barrel. “There’s no other wine like this in the world,” he tells me, speaking more to the process than to his skills. Nuts, honey, dried apricots, sultanas… it’s luscious, vibrant stuff, with an astringent bite at the end. The 2013 is next; it’s tight, marmalade and orange peel come out, along with those great dried fruits, then tea leaf and spices.

The process behind VdC is interesting for the wine geek. Up to three different batches are blended in, all made from grapes that are picked as raisins individually (they harvest only about one kilogram per picker per day). Acacia barrels are used for four-to-five years of aging, since they have fewer pores and so are more sealed than French oak barrels. It’s an oxidative style that Day refers to as “bulletproof.”

“Instead of adding more sulfur, I add back essencia juice” to halt fermentation, he tells me. That essencia juice is 1% abv, and 650 grams of sugar… per liter. It’s basically syrup… a fascinating, sultana-and-tea, blow-your-mind kind of syrup (and yeah, we also taste that).

I can now tell you from experience that VdC goes a loooong way in making you forget about sciatic pain, herniated disks, and bowel control related panic attacks. I start to wonder if Napolean was a sciatica sufferer…

If there’s a focus on the future here, it’s a retrospective one. In typical sharp-stone-that-just-fell-into-the-stream-off-the-riverbank young guy fashion, Day seems doggedly determined to ensure that the future of KC measures up to its distant past. It helps, of course, when your brand story includes Jane Austen, French emperors, and – okay, fine – Fifty Shades of Whatever.

So… where is KC going?

Okay, then, so let’s go there:

For having only been bottled for two weeks when I tasted it, she was already dressed up and ready to explore the town; refreshed and vivacious after a nice long night’s sleep, grapefruit and green veggies for breakfast, pepper on the side, fresh saline in the contact lenses, and itching to feel the wet pavement stones under her shoes. 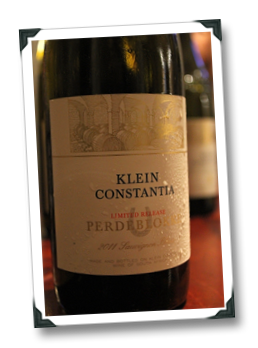 Three thousand bottles, all from fruit from one vineyard block. Green, intensely focused, but not overtly aromatic, there’s saline, pepper, light tropical fruits, flint, and a vibrant elegance to the whole package. It will take time to get your head around, but it would be time well-spent, I think.

Spicy, dried fruits to start, sultana and tea leaf, orange marmalade, toasted nuts. Okay, a little bit of volatile acidity, too, but only if you’re really looking for it. This starts heavy and viscous, but lightens up quickly with a burst of freshness. Marmalade comes back to glide you down smoothly to the ride’s exit, and gives you a spicy pinch on the butt cheek at the end, just to remind you who’s really the boss around here. Does it rival Tokaji? Yeah, it does rival Tokaji. And I could think of a loooong list of other wines that I’d put much further down than this one on the list of “potential vino to imbibe when croaking.” I guess Napoleon really was a smart dude, after all…

2 thoughts on “Rain, Raisins And Retrospect: Klein Constantia’s Battle To Hold On To The Past”