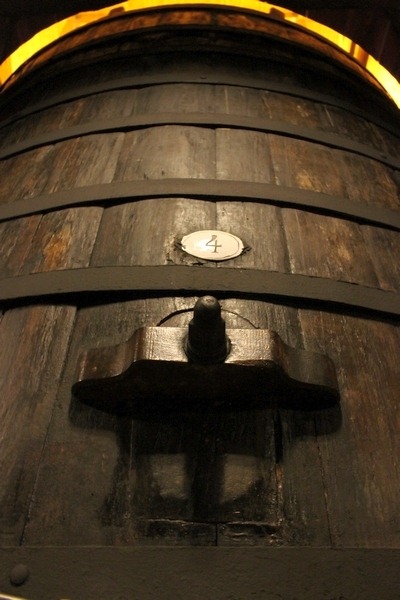 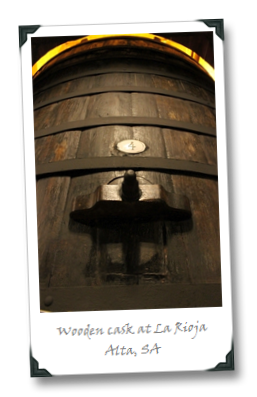 There’s a scene at the end of Raiders Of The Lost Ark (please don’t tell me you haven’t seen it… it’s only the greatest action/adventure flick yet made by humans) where an unnamed warehouse worker wheels a large box, presumably containing the Lost Ark of the Covenant (which turns out to be a WOMD) into a massive storage complex, through what appears to be miles of boxes stacked dozens of feet high.

Walking through the enormous barrel storage rooms at venerable Haro producer La Rioja Alta, S.A., anyone who remembers that closing scene from Raiders is bound to experience an eerie sense of déjà vu. Same goes for those strolling through LRA’s underground walkways and barrel storage areas – there are literally millions of bottles of wine slumbering in that quiet earth.

In fact, just about everything at LRA’s Haro location, aside from the tasting room (one of the few Rioja producers who even have one, and one which demonstrates a clear design love affair with high-gloss surfaces at that), feels oversized; from their display cases and production museums, down to the cask rooms and wooden casks themselves. Even their private tasting area has a huge open space smack dab in the center of it, as if a god with a magic iPhone had grabbed the corners of a normally-proportioned conference room and pinched-and-slid it to expand it to three times its normal size.

All of which makes it all the more interesting to a wine geek, weaned on the notion that truly great wine is only made in tiny quantities, that LRA’s large (okay, ginormous) production volume doesn’t get in the way whatsoever of the quality of their wines.

In fact, in tasting the wines from La Rioja Alta, one gets the sense that every hour of their near 125 years of winemaking experience has somehow been put to good use; the lineup includes not only some of Spain’s most long-lived and elegantly complex (and expensive) reds, but also one of Europe’s most stunning red wines bargains…

LRA was the last wine producer stop on my 2012 press trip to Rioja, and while tasting through some of their Spanish lineup (the group has several brands, and also imports Ayala Champagne) with Export Manager Javier Amescua, I couldn’t help but feel that we’d somehow saved the best for last.

Sure, there were some stewy, woody, funky clunkers, but these were so far in the minority that there presence did nothing to mar the brilliance of LRA’s best efforts, which from the vantage point of my full-body immersion (literally) into Rioja wine puts LRA squarely at the top of the heap when it comes to old school style reds. 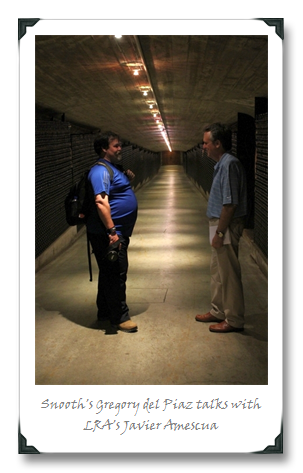 As nicely as Amescua treated our group, I’d not recorded one quote from the relatively soft-spoken guy. All of my energy went into the tasting, because most of the wines more or less had me at first-sniff. Which all probably sounds slightly sycophantic but results are results and the juice is the juice, and this juice was clearly one of those rare examples of a wine producer on top of its game, incorporating a century of experience and making smart decisions along that journey, and just so clearly f*cking deserving of its reputation in the region.

So the people aren’t really the story here, the wine itself is the story. And while some are really pricey, they’re getting highlighted anyway in case you feel like splurging (or find yourself on the better end of someone’s expense account at a nice restaurant). But we’re going to start off with one of the best – and most interesting – wines that I’ve tasted in 2012, and lucky for us it also happens to be one of the most reasonably-priced, as well: 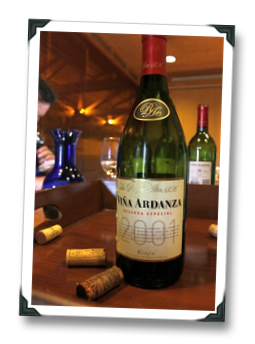 The best way to sum up this wine is, I think, to go simple: it’s the single most stunning red wine bargain I’ve tasted this year. 80% Tempranillo, 20% Garnacha, mostly from a thirty-year old vineyard. Here’s what you get for your thirty bucks: tomato leaf, balsamic, olives, dried herbs, stewed-but-still-tart red plums, dark cherries, cigar, tobacco, tea leaf, black raspberry and sweet spices. And a pretty sexy, silky mouthfeel that makes it just as good going down as it is when you first sniff it. It’s still fresh as a daisy, and this one is like combining the smarmy, back-of-the-classroom clown with the teacher’s pet, a straight-A student that’s also fun to be around. This is only the third Ardanza to be declared “Reserva Especial” (the others coming in 1964 and 1973), and as you can tell I’ve no reason to dispute it. I haven’t had a red that overachieved like this in a long, long time. It’s one of those buy-it-by-the-case releases, but I probably won’t be lucky enough to do that living in the Communistwealth of Pennsylvania. 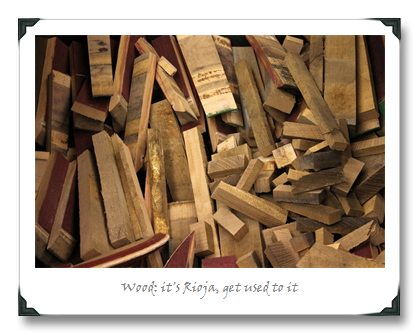 And in the “well, I’m still listening but these are kinda pricey” category: 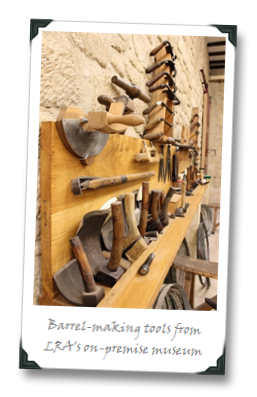 You can’t do Gran Reservas without getting into some wood. At its worst, a GR can taste like… well, like whatever wood it was aged in for a billion months. When done right, as in this case, you get wood that is spicy, and aromatically sweet. The journey here starts with a sandalwood door, takes you through red plums, cherries, balsamic, and it’s all wreathed in a small bit of tobacco smoke. The palate on this wine goes right into ass-kicking mode, plums everywhere balanced by dry but easy-going tannins; it’s almost plush, with tension provided by the balsamic hints. At the end, you’ve got after-dinner tea served up on a pretty long finish. It’s vibrant juice, with good years still ahead of it, but it will play nice with just about any red meat dish you could throw at it now. Apparently `98 was one of the largest productions ever for the area, though certainly this wine doesn’t seem to have been impacted one iota in the quality department.

This wine is actually a little tight. Yeah, after nearly twenty years. There’s a gorgeous tobacco note that servers as the official calling card on the `95 890, and more of the traditional dried fig, plums, spice and stewed fruits you’d expect from an aged Rioja. As interesting as things are sniffing it, this 890 goes into overdrive in the mouth: a beautiful balancing act ensues between savory, balsamic notes and fresh fruit and tea-like herbs. The finish gets very spicy and is still hanging around a good couple of minutes after when you thought it had actually left. “Hey bro, you’re still here? Awesome!” Just downright gorgeous stuff. Mostly Tempranillo, the `95 saw splashes (3% each) of Graciano and Mazuelo. 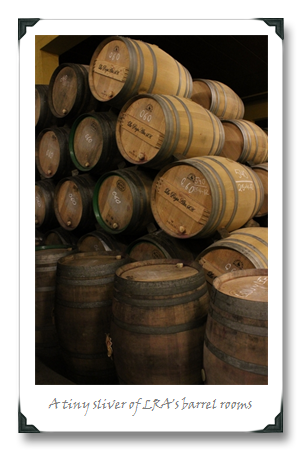 And finally, the “let me just go find a cash machine…” category: 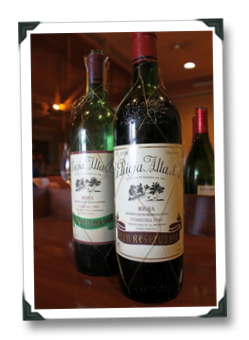 While you might remember the 1980s for awkward fashion statements and angular hair styles (and TRON), but there’s nothing awkward about the `82 904. Nothing. Classy all the way, this wine is like European kitchen tour: spices, plums, tomato plants, leather (look, maybe someone in the kitchen is wearing leather pants, okay?), liqueur, licorice, figs, balsamic, a cigar at the end. It’s a slow, methodical tour, too, nothing rushed (including the long, spicy finish), everything in its proper place, meticulously arranged and identifiable. Closer to being ready than not, though I suspect it will develop at least a couple more years before starting to (slowly) give up the ghost. The spec sheet on this remarks that “the fermentation was totally normal,” which I suppose is comforting. To someone. Apparently.

The earthiest of the best wines I tasted at LRA, there’s an amazing freshness to this 890 (if only so much from `82 came off this fresh, and not in a Kool And The Gang way, I mean). The tomato leaves have some dirt on them. The figs and plums are spiced up. The licorice has a smoky note. The balsamic is infused with dried herbs. You could sniff the complexity on this for days, really. But given how fresh it is, it almost feels a crime not to leave this wine to settle a bit more, and try it in a few more years when the tartest of the red fruits begin to show their stuff. It’s a benchmark wine for me, and in a lot of ways I feel I’ll be comparing aged Gran Reservas to this yardstick for a good long while. Little bits of Graciano and Mazuelo go long ways with the Tempranillo in this 980. Decant, or suffer (probably).