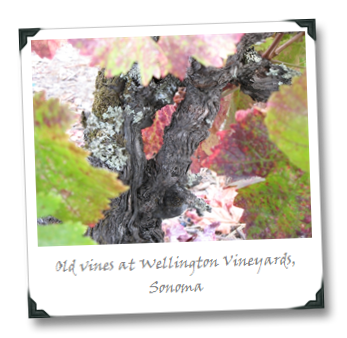 “This could be the last Zinfandel we bottle with this designation.  From both 2005 and 2006 we have blended the Zin from the ancient vines with that from more recent plantings that were grafted using wood from our old vines…  2004 was a warm vintage, and this wine shows it, with aromas of sun baked blackberries, black currant and licorice.  It has great complexity, with new aromas at every whiff: dried herbs, chocolate, molasses, hints of tar and prunes.  True to form, our 2004  Estate bottled Zinfandel is what the French would call a masculine wine – muscular and structured, big, but not sweet…  Typical of our Estate Zins, this wine should age well for at least ten years.  Our Zinfandel is field blended with small amounts of Durif (aka Petite Sirah), Syrah, Tempranillo, Carignan and Mourvedre, all planted in 1892.”

Only 94 cases of the wine were produced, primarily because when vines get that old they don’t produce a lot of fruit – but the fruit that they do produce is often considered very concentrated in flavor.

And if this wine is anything, it’s concentrated. I’m not going to put the ‘focused’ or ‘complex’ tags on this wine, but the blackberry, dark cherry, and dried prune characteristics are really concentrated, in that almost-raisiny-but-not-quite-like-raisins(and not overly-extracted) way that only fruit from old vines can deliver.  It’s like the crack cocaine version of Zin.

Big? Yep – but also quite balanced and a treat to drink even totally on its own.

And it certainly scared off the winter chill.