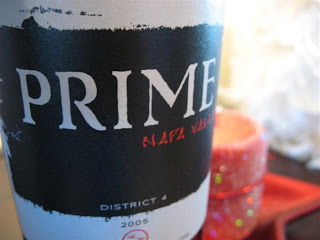 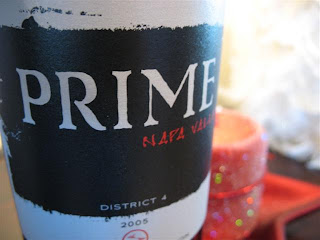 Remember our not-so-old friends, Volta? Seems there are a few other winemakers out there who do, too.

“I was in Volta‘s Winemaker Massimo’s class at UC Davis,” Ted told me. “We used to drink beers together in his Silver Oak days…”

As it turns out, Volta isn’t the only tiny Napa winery that kicked off an innagural, premium Cabernet release in the 2005 vintage. The promising 2005 red wine harvest in Napa also saw the birth of Prime Cellars (who recently contacted me to send me a sample after reading Volta’s first-ever review here at 1WineDude.com), founded by UC Davis alumni and marching band-mates Ted & Lisa Henry, and Curtis Mann (handling winemaking, marketing, and sales chores, respectively).

Unlike Volta, Prime is going for a less high-octane Cab. (their 2005 release clocks in at 13.6% abv, which is about a full percent lower than Volta’s Cab)…

The back-label on their first release, dubbed “District 4” Cabernet, does the best job of summing up the story of their endeavor so far: “Hand picked… Small Lot… French Oak… Empty bank account.”

Let’s check out the wine…

Sourced from Grasso Vineyard in Napa’s east hills (Coombsville), which is a relatively cool growing area that can still achieve ripeness for traditional Bordeaux varieties like Cab Sauv. 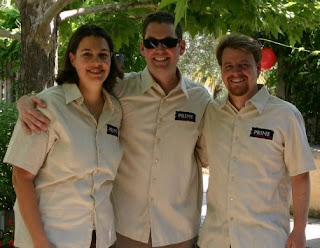 My thoughts: Even though this wine is lower in alcohol (13.6%) than the typical bordering-on-port style of CA Cab popular today, the first thing that hits you about this wine is that it smells (and looks) powerful.

The nose is dominated by black plum, with a hint of dried black fruits and elegant spice (rather than hefty oak). After several minutes in the glass, pepper and dried herbs start to creep out, and once in a while you sniff some wet dirt (but in a good way).

Take a sip, and and the fruits get a little more red (cherries and currants), but still “feel” dried. The tannins are smooth but almost coffee-thick, and the coffee notees stick around on a finish that is almost half a minute long.

Like it’s prime number namesake, Prime’s District 4 achieves an excellent balance, with almost nothing in divisive proportion; its fruit, tannic & acidic structure, alcohol, and spice seem measured out in harmonious doses with almost recipe-like precision. While in balance, these elements haven’t blended harmoniously together yet – it needs time, either by an hour or two in a decanter, or prefreably 4 years (in a bottle, of course). 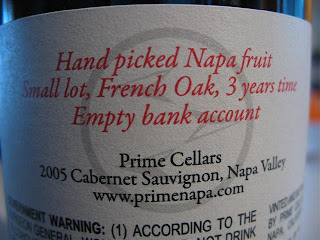 This first Prime Cellars release is only 147 cases – so you’ll probably want to visit their website if you want to get your hands on it; chances are it won’t show up at your local wine shop yet.

Although I undermine my perception of ay sort of wine expertise when I say things like this, I need to tell you that I’m stumped as to wether or not the `05 District 4 will ever capitalize on its integration potential.

But I suppose I’d put more money on that than one me being able to hold out 4 years before drinking another bottle.

1 thought on “Prime Time: Another New Kid on the ‘Napa Cab’ Block”