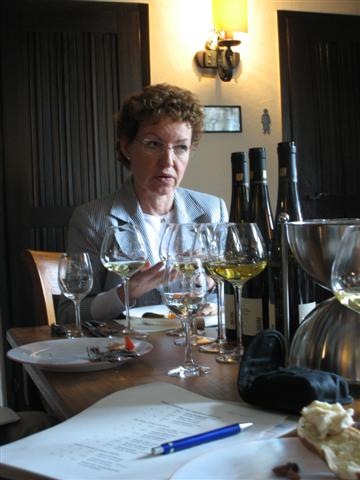 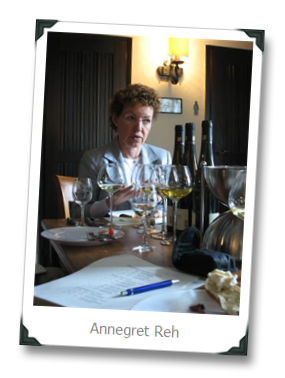 “We can’t limit ourselves to super, well-balanced wines with residual sugar.  We have to catch mice with bacon.”  By mice, Annegret means the modern German wine consumer – Wine drinkers in Germany have rebelled against the explosion of cheap, bad, cloyingly sweet wines that plagued the reputation of German wines for decades.  But instead of seeking out good, well-balanced wines from quality estates, those consumers have nearly abandoned sweet wines from Germany altogether, and are voting with their wallets in favor of bone-dry Rieslings…

Some of those dry wines are themselves pretty bad, of course.  Much of the current state of German wine’s reputation can be pinned to the country’s confusing wine laws, which permit wines made from grapes on flat, poor sites to carry similar geographic designations as wines from small, prized vineyards in the same area.

A reputation needs to be based on something tangible, of course, and Kesselstatt wines are good choice to act as ambassadors for quality over quantity.  Over lunch with Annegret, I taste Kesselstatt Rieslings from all three Mosel sub areas, dating from 1997 to 2008, across nearly the entire ripeness spectrum permitted under the current wine laws.  They range from pure, racy, citrusy, dry wines with great minerality to lively and floral, concentrated sweet wines.  All of them are superbly balanced and food-friendly. 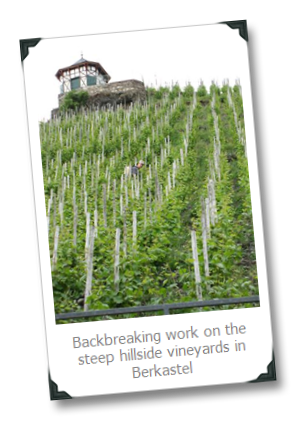 Annegret has a clear position on how to restore the reputation of German wine, and quality Mosel Riesling wine in particular: “Now that we have global warming, and abuse, the classification system [based on grape ripeness] is not helping.  We need a system that limits grape varieties, limits yields, and sets minimum ripeness levels.  You need a vision, and VDP is a vision.”

VDP is short for Verbrand Deutscher Pradikatsweinguter, an association of some 200 German wine producers who voluntarily adhere to more stringent cellar and vineyard regulations than are specified by the much-abused German wine laws.  Getting more producers behind the VDP, Annegret argues, is the surest way to reinstate Germany’s rightful place as one of the world’s top wine producers.

VDP may be one answer, but it’s not a new one – it predates the currently abused classification system by decades.  Couldn’t one argue that if the VDP was going to work, it would have worked by now?  Are Mosel producers disagreeing about if/how/when the VDP should be used?

It’s not wise to underestimate just how slow the pace of change can be here.  According to VDP President Michael Prinz zu Salm-Salm, “We are only at the beginning of a classification system and it is a cultural task of generations, to which there cannot be given any quick, serious answer.”  I suppose that those looking for German wine law reform shouldn’t be holding their breath…

The day after my lunch with Annegret, I’m biking along the Mosel, winding towards the town of Berkanstel under a brilliant Spring sun, en route to another storied Mosel producer, Max Ferd. Richter.  The average wine consumer could certainly be forgiven for not realizing that there is an identity crisis taking place in the Mosel – from a distance, and certainly from the vantage point of cycling along the river gazing up at the steep slopes of vines (some of which reach back-aching angles of 80 degrees), things don’t appear to be in flux.  The Mosel may not be the largest wine-growing area in Germany, but it ranks first worldwide in area devoted to Riesling – over 13,000 acres of the variety are planted here.  The region probably makes the purest Riesling wines in the world, if not the best.  The basics just don’t seem to be in question.

It all seems somewhat of a foregone conclusion until you talk to producers like Annegret and Dirk Max Ferd. Richter, that is. 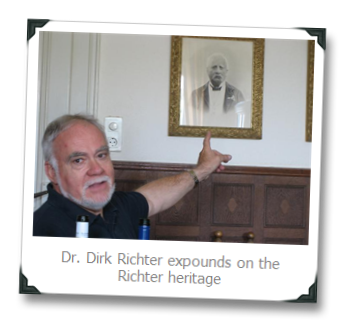 Dr. Richter is a 9th generation curator of Weingut Max Ferd. Richter, who have been in the wine / exporting business since the late 1600s.  After parking my bike, I meet Dirk in the Mulheim estate courtyard.  Dirk wears glasses, and has a roundish face bordered by fair white hair and a white beard, but his demeanor at first is all business.  He introduces himself, but doesn’t ask who I am.

We tour the estate cellars (their oldest library wines date back to 1864), during which Dr. Richter expounds on his winemaking philosophy (“We’re winegrowers – we help the Lord to do his job; we don’t make the wine”), then taste wines from `82 to `08 in the estate’s second story tasting room.  The room is shadowed in the afternoon sun, and it’s cluttered with old bottles and books.  Flies buzz the black and gold chandelier overhead in the warmth.  The wines of Richter have more pineapple and sour apple notes than those of Kesselstatt, but are every bit as good.

Dr. Richter opens up a bit after we taste a few of his wines; he has a passion for the future of Mosel wines that is every bit as powerful as Annegret’s, but it couldn’t be more different in approach.  “We are the model country for cool climate wine production.  Why should we change? I’m opposed to my colleagues,” he says when discussing the VDP.  “I think the German wine law is easy.”  Consumers, according to Dr. Richter, need only be aware that “the longer the word on bottle, the more important the wine.”

It’s not unexpected that German winemakers like Dirk Richter would look to the past for inspiration – fewer wine regions have such deep ties to history.  Romans (in an effort to avoid transport of heavy amphorae filled with wine), cultivated the vine along the Mosel, and its smaller tributaries, the Saar and Ruwer, nearly 2,000 years ago.  It’s suspected that the Celts may have been making wine here before then (to date there is only sufficient archeological evidence to prove that they were drinking it).  After the Roman empire dissolved, monasteries in the 7th and 8th centuries carried on the tradition of winemaking until their landholdings were dispersed in the 1800s by Napoleonic law (thankfully, most of the secular inheritors kept up the quality winemaking traditions). 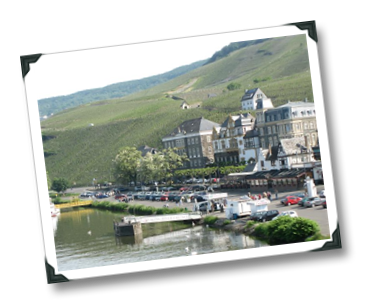 That viticulture is even possible at all in such a northerly part of the world (Germany’s wine growing regions are as far north as Kiev) is a bit of a geological miracle over 200 million years in the making.  The soil along the Mosel river is largely the slate, sandstone, loess and marl deposits of an ancient seabed – bad for most crops, but great for stressing grapevines.  Achieving any oenological ripeness this far north requires a lot of sunshine, which the Mosel’s steep, south-facing slopes receive in spades, helped along by the heat-reflecting properties of the soils and the proximity of the slopes to the river.

It’s the kind of place that makes you wish you knew how to use the Panoramic setting on your digital camera.

The phrase “twists and turns” does not even begin to describe the Mosel’s journey from Perl to the town of Koblenz, where it meets the Rhine – along that 140 km route, the river snakes its way left and right to a 250 km length, barely achieving a straight line from the ancient city of Trier (Germany’s oldest) to the end of its north-westward run. Along its picturesque and circuitous way, the Mosel exposes far more of its sloping banks to the rays of the southern sun – so essential for quality grape growing this far north – than it would if it ran straight.  Everything associated with terroir, and its impact on the resulting wine, is amplified in this climate.  So, too, it seems are the tempers and reactions of what direction Mosel Riesling needs to take from here.

The differing sides of the debate do share at least one view, however: the best way to get German wines into the quality spotlight is to get people to taste them.

“You need to get the wines into their mouths,” Dr. Richter told me, “it’s not for the mass market.  It requires a little bit of intelligence.”  Annegret’s view is similar: “We have to introduce these wines and promote these wines with food.  You need to take people step by step into aged and especially complex Riesling.” 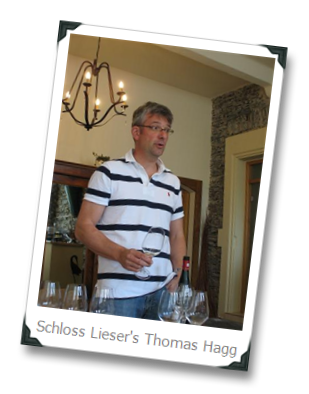 In the end, the best way to secure the future of Mosel Riesling might just be to get on with making the best wines possible, and let the rest sort itself out. That seemed to be the approach of Thomas Haag son of Fritz Hagg’s Wilhelm Haag.  Thomas took over Schloss Lieser in 1992, when the estate was in disrepair, had no customers, and possessed not a single bottle of wine in its library.  Lieser was another stop on my Mosel bike tour, and I found Thomas’ wines to be superb, with hints of fresh-cut vegetables adding complexity to the slate, honey blossom, and peach / lemon notes that marked most of the estate’s wines.  They might have been the purest Rieslings I’d tasted in the Mosel.

“We are talking about a very special and unique style you can’t find anywhere else in the world,” he said about Mosel Riesling, “elegant, with finesse and very low alcohol.  Respect terroir and the right grape for the region; this is the most important thing, I think: top quality.”

What does Thomas think about the dichotomy of approaches to the future of the region’s wines?

Before leaving Germany, my group took a detour to Berkanstel, the sometimes-quaint, sometimes-kitschy tourist town in the middle Mosel.  We talked about Germany and Riesling over coffee, having had our fill of wine for the week.  As we passed one of the many small shops offering wine, booze, and trinkets, I looked in the window and noticed several bottles of cheap German wine on sale.  On the labels was the designation “Bernkasteler Doktor” – the same designation that also marks some of the most sublime and prized Rieslings in the world.

If that’s not confusing for the average wine consumer, I thought, then I don’t know what is.

I sighed, and said a silent prayer that the next overhaul of the German wine laws might mark a better day for the future of the Mosel. 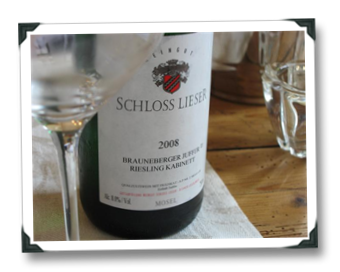 14 thoughts on “Postcard from Germany: A House Divided”