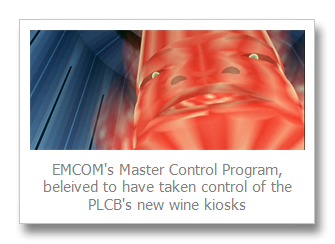 “We have credible reason to believe that the PLCB wine kiosks are ‘digitizing’ some kiosk customers and abducting them into the electronic world inside the kiosks central computer in Harrisburg,” stated acting state police commissioner Lt. Col. Frank Pawlowski, in a statement made this morning to the media. 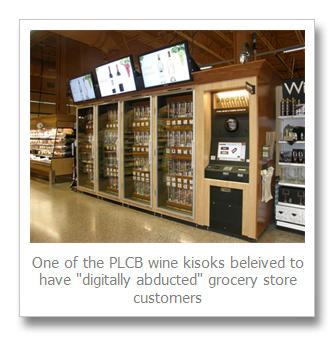 Investigation into the grocery store abductions took a decidedly strange turn last week based on eyewitness testimony, and at least fifteen of the reportedly missing customers were confirmed to have swiped their credit cards at one of the wine kiosks the same day their disappearances were reported by family and friends. The abductions began approximately four weeks after creation of the “Master Control Program” (MCP) in Harrisburg.  MCP is a Pennsylvania taxpayer-funded computer program, developed by  outside consultant group and software powerhouse EMCOM, based on cutting-edge Artificial Intelligence (AI) technologies meant to replace the need for human PLCB staff intervention to finalize kiosk wine purchases.

Speaking about the MCP in a press release last moth, PLCB Chairman Patrick J. Stapleton, III stated that “we in the PLCB are pleased and excited to be bringing EMCOM on board for the kiosk project; their Master Control Program software will eliminate the need for kiosk customer IDs to be checked by PLCB employees during wine purchases made at the kiosks and therefore increase customer satisfaction by speeding up the already simple and convenient thirty-seven step process required to purchase wines at the kiosk today.”

EMCOM made a media news splash earlier this year when several of its high-ranking developers left the company in a bitter dispute over copyrights and frustration by employees over how the company was being run by CEO Ed Dillinger. At least one senior developer, Alan Bradley, publicly expressed concern over the Master Control Program, telling media that “I had it almost ready, when Dillinger cut everyone with Group-7 access out of the system. I tell you ever since he got that Master Control Program, the system’s got more bugs than a bait store!” 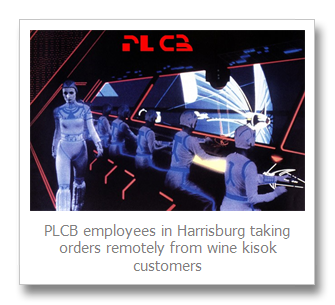 According to eyewitness testimony, at least two kiosk customers on separate occasions were seen to be engulfed in a strange blue laser emanating from the EMCOM-powered kiosks. The laser seems to have emitted in a quick burst when those customers leaned in to breathe into the kiosk’s breathalyzer (one of the several steps required by customers purchasing wine from the kiosks), engulfing the customer in each case, after which the disappeared.

It is now suspected that the MCP may have become self-aware, and has knowingly abducted the kiosk customers as a means of self-defense, digitizing them into its electronic world where their digital essences are held prisoner and forced to undergo strange rituals – called “grid games” – for the amusement of the MCP itself. According to some reports, these odd rituals may include forced participation in light cycle games, as well as paying a 20% surcharge for wines purchased from the kiosk (compared to retail prices for the same wines sold in “non-control” states).

Inside PLCB sources, speaking to the Inebriated Press  under condition of anonymity, have confirmed that the PLCB and PA state police have established direct communication with the MCP via “dumb” computer terminals, and have already initiated hostage negotiations.  However, the talks are apparently slow-going and have stalled multiple times, primarily due to the difficulties in communicating via the archaic language used by the MCP. According to the same PLCB source, the most recent breakdown in talks with the MCP happened this morning when, after inquiring about the health of the digitized hostages, the MCP replied directly to PLCB Chairman Stapleton:

“You’ve enjoyed all the power you’ve been given, haven’t you? I wonder how you’d take to working in a pocket calculator. Your standard logic is obsolete in the vintage operating environment. End of Line.”

No timeline has been set for the release of the hostages, however sales of the Tron Evolution Limited Edition Game with Free Lightcycle to PA state residents have reportedly skyrocketed.