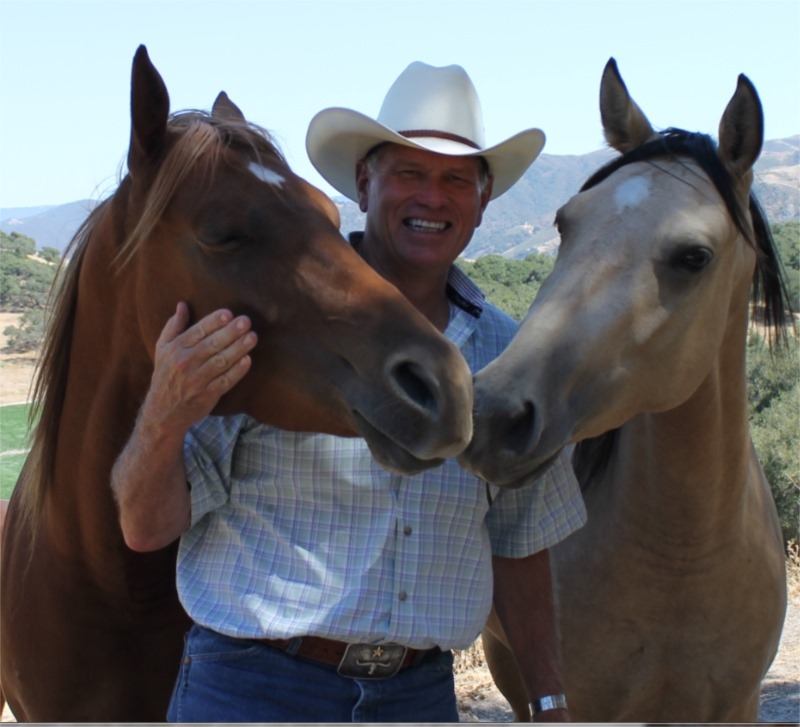 Central Coast-ish California’s Pence Ranch, and its charismatic owner, Blair Pence (who, with toothy grin and cowboy hat looks every bit the part of a rancher) have been making the wine scene headlines so far in 2013, and not in a good way. 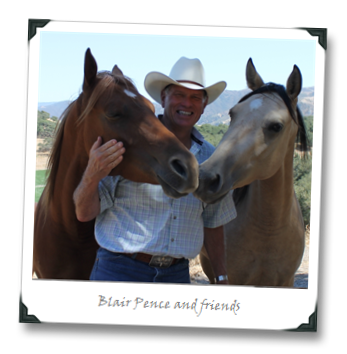 To bring you up to speed on what has become the U.S. wine biz equivalent of tossing flaming poop bags about AVA boundaries, let’s quote a few spots and then we can talk about what no one else seems to be getting at in this battle, which is Pence’s wine itself.

To the tape, from Independent.com (emphasis mine):

Vintner Blair Pence filed with the federal government this February to expand the borders of the increasingly renowned Sta. Rita Hills wine-grape-growing appellation to the east to include his vineyard, which he planted in 2006 outside of Buellton… USC-educated developer-turned-farmer has been dealing with the wrath of his winemaking neighbors, and their terroir tussle is now making headlines in the international wine press. “If you look at the history, you look at the geology, you look at the weather, it belongs in the appellation,” said Pence, who built Los Angeles office buildings and industrial parks before growing grapes, ranching cattle, and raising avocados. “The science is so clear-cut.”

And the opposition summary, via WineSpectator.com (emphasis mine):

The board of the Sta. Rita Hills Winegrower Alliance (SRHWA) disagreed with Pence’s arguments, however, and voted unanimously to oppose expansion. Wes Hagen of Clos Pepe, the original petitioner who crafted the AVA boundaries, is against the expansion, saying the new border would extend into a distinct landmass called the Buellton Flats, which has a north-south orientation, while the current AVA has an east-west orientation. According to Hagen, the areas Pence wants included also lack the maritime influence that growers insist make the region ideal for Pinot Noir and Chardonnay. “We’ve spent $25 million and 20 years promoting the area,” said Hagen. “We don’t want to be catty, but we want to protect what we’ve built.”

Reaction has not been kind, probably because this seems like a bit of a money grab for Pence, who stands to gain higher grape prices if his AVA expansion bid is successful. Since I visited Pence Ranch and talked about this with Blair Pence last August, I thought I’d chime in on the debate/debacle; mostly because I find it very odd that little has been said about whether or not the Pence Ranch wine itself seems to fit what one might call the Sta. Rita Hills Pinot profile…

Pence is a working ranch, and the cattle and horses aren’t shy about making acquaintances with you (see pics herein). It’s the fifth ranch established by Pence (others grow avocados, among other things), having been carved out of raw land on a windy, elevated (about 450 feet above sea level) site that Pence described to me then as “essentially part of Sta. Rita Hills” (the ranch borders its eastern edge). The vineyards are, according to Pence and in contradiction with the opposing viewpoint of Hagen, exposed to Pacific influences (such as that wind, and morning fog). 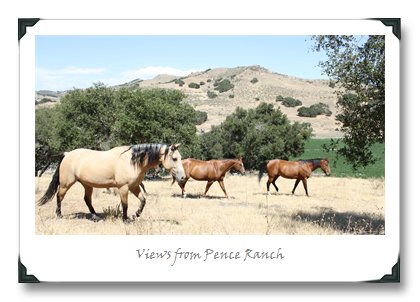 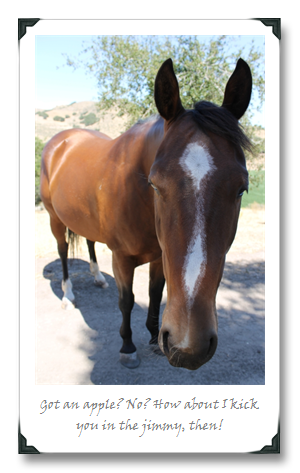 “I became obsessed with Burgundy,” Pence noted to me during the visit, which explains the vineyard location and focus on Pinot Noir and Chardonnay (which has yet to be produced commercially from his site). He also told me that he has “had bad luck bottling at a full moon; high pressure at a full moon is good, though, there’s less stirring up of wine in the barrel.” I didn’t get the sense that this was all business for Pence; he’s clearly intending to make excellent wine that he would want to drink alongside the (very) expensive Burgundy that got him into wine in the first place.

Ten blocks were planted across fifty acres on the ranch, each having separate clone and rootstock combinations depending on the various soil profiles of each block. Pence employed the same meticulous planning for the vineyard that he used for his other ranches. Interestingly, all of the workers are salaried employees. Jeff Fink handles the winemaking duties – remember, there really is wine involved here. Pence seems like a focused guy and a good businessman, but one who also takes care of his peeps, too (I can think of a lot of people who might less deserve getting more dough for their grapes). 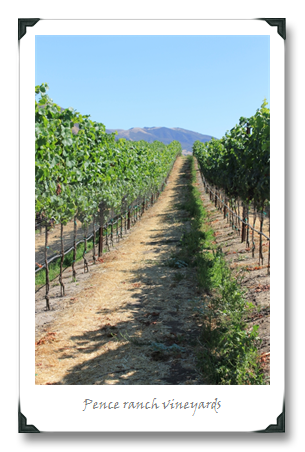 I found a few things to like in tasting through some of Pence Ranch’s Pinot releases last August, finding them ballsy, unique, and tough to get your head around at first taste. Just in time for this coattail-jumping post received a sample of their 2010 Estate Pinot, so I was able to re-taste it in an effort to provide some thoughts on whether or not the wines alone echo Sta. Rita Hills and would help to justify Pence’s fight to expand the AVA.

620 cases of this Pinot were made; other vital signs include 14.5% abv, grapes pulled from five blocks, 15% whole cluster, aged 22 months in French oak barrels (some older than one year), and bottled unfined/unfiltered. Now that the boring stuff is out of the way… Having spent more time in bottle has helped this wine come together. It’s less chalky and earthy than I remember it, though still contains some of those elements, along with a savory streak. There are bright red berry and cherry fruits and tea-like herbaceousness (in a good way), which you would expect from Sta. Rita Hills Pinot, along with more redcurrant-like fruit and more power than structure (which you might not expect from SRH). This is somewhat old-school Pinot, with austerity, pithiness, and a taut muscular and (very) leathery side. The finish is long, full of citrus, but it’s a bit hot, too. It’s a solid wine, a Pinot made for lamb stew and a drink that wants to rough-it, and maybe ride side-saddle with Pence’s horses to help him round up some cattle. 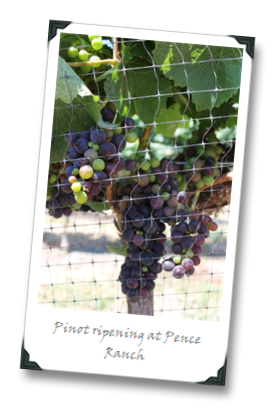 So… does it fit the Sta. Rita Hills profile?

I’m divided enough about it that I wouldn’t offer it up as Exhibit A evidence in support of Pence’s expansion bid. It seemed to me to have more in common (unsurprisingly) with the SBC Pinots made by the producers who purchase Pence’s fruit, lacking the spices, purity and focus of some of the best Sta. Rita Hills Pinots.

Having said that, there are aspects of it that are certainly kissing-cousins, spitting-distance with Sta. Rita Hills wines.

Enough fence-sitting, here’s The Verdict: Not a strong enough match. Yeah, we’re splitting Pinot characteristic hairs here, but these are still very early days for Pence in terms of showcasing his Pence Ranch fruit via his personal label. It’s just too early to tell (for me, anyway) if the wines will develop more into what might be termed a “classic” Sta. Rita Hills (okay, the “Sta.” thing is officially pissing me off now… what’s wrong with “Santa,” anyway? It’s not like we’re going to confuse it with Christmas…) Pinot profile.

From a wine-as-hard-evidence perspective, Pence’s AVA bid is probably a bit premature. Let’s give these young vines, and young wines, more time to develop; Pence might not have a strong wine-case (ha! see what I did there?) now, but given how quickly the 2010 Estate Pinot came together and improved with just a little bit of bottle time, I’m not going to rule out support for Pence’s plan at some point in the (possibly near) future…

15 thoughts on “Pence In The Sta. Rita Hills Cross Hairs, But How’s The Wine?”