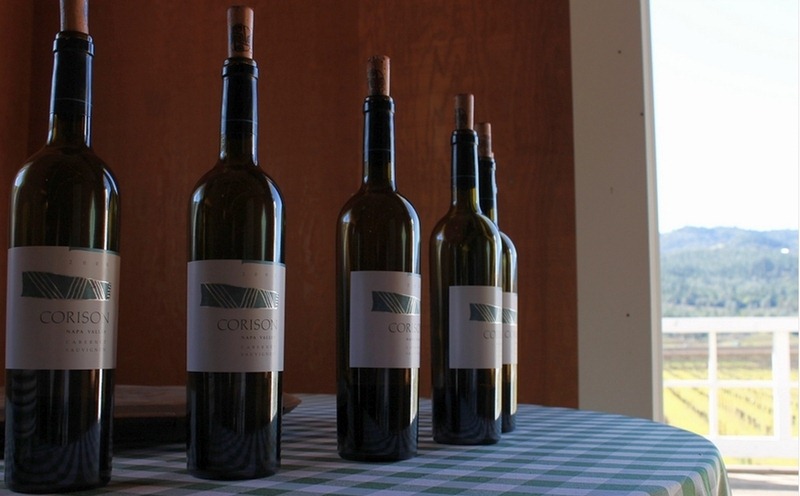 The best way to introduce you to Cathy Corison, I think, is by telling you what happened when I said goodbye to her. 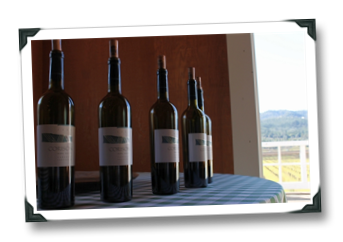 I was making my way out of her Route 29 winery building in St. Helena, having just wrapped up a short bit of video for Wines.com with the diminutive (even by my modest vertical viewpoint), soft-spoken, but not-to-be-trifled with winemaker (example: during a retrospective tasting over lunch, one of the things she told me was “the word ‘No’ is, in fact, a complete sentence”). We seemed to be waiting for the least-awkward moment, an opening for my exit (if that makes sense), when Cathy began… gardening.

She semi-nervously began picking out dead plants from a colorful bunch of small flowers planted atop barrels in the entranceway to the winery. I am familiar with this sort of habitual behavior, tidying up, constantly feeling as though you have to do something; she didn’t know it but I silently bonded with a small part of her psyche at that moment. Since I can’t stand even nanoseconds of silence, I stoked up a lead-in to a goodbye conversation.

“See you tomorrow at Premiere?” I asked.

“No, I won’t be pouring,” she answered, then stopped tending the flowers and looked up at me, squinting in the sun through her schoolmarm glasses. “Galloni is coming to taste tomorrow.”

That’s Antonio Galloni, who has taken over the CA wine reviewing beat from Robert Parker at The Wine Advocate. To briefly summarize why that might have gotten Cathy into flower-weeding mode, I’ll refer you to this statement from NYC’s California Wine Merchants: “Robert Parker has not published ratings on [Corison’s] wines since 1995, and really never awarded them with scores above the low 90s anyway.”

“Do you know my history with Robert Parker scores?” she countered.

“Well, bless you for that!”

And so it goes with Corison, both a matriarch and a wine that, when you start peeling back some of the layers, reveal a series of contrasts: a winemaker not courting high scores but hosting critics and garnering a boatload of acclaim; an anachronistic woman making anachronistic wine, one that is produced in modern ways but with nods to the ancient past (the artistic busted-pottery artwork adorning the labels wasn’t put there without some forethought, I gathered); and someone who came into winemaking “old school” but now is totally killing it with her customers on twitter (more of that coming up soon on the Wines.com blog) and recently hired wine media maven Hardy Wallace…

Cathy wasn’t always quite so… iconoclastic, at least as far as wine is concerned. She has made what we’d consider more traditional Napa wine for other producers. But even after a quarter of a century into doing her own thing you can tell when you talk to Cathy Corison that she’s as determined and focused as ever on doing her own thing. 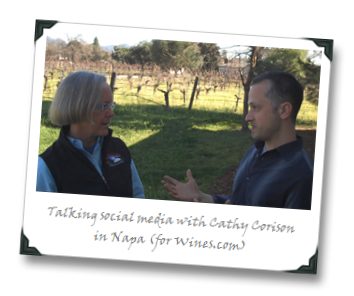 “I always wanted to make world class wine. I didn’t even know what that meant. This was in 1975,” she told me when we tasted through the 2000-2006 vintages of her Napa Valley Cabernet Sauvignon.

Before starting her own winery, during her stint at Chappellet, “there was a wine inside of me that wanted to come out. It was later that I learned that wine was a Rutherford Bench wine.”

Since then, Cathy has pretty much played only her own hand in the wine biz, no matter what cards were dealt (good press, bad scores, etc.). “The 2003 Long Meadow Ranch was the last time I made wine for somebody else.” As one of her employees told me (with a smile and a wink) when I greeted her at the door, apologizing to her that I didn’t recall her name: “that’s ok – the only one you really need to make sure you know is Cathy!” Matriarch, indeed.

The wines… well, they’re as similarly divorced from chasing any trendiness as their maker is. They are thoroughly Napa in power, depth and concentration, but Napa with a sense of terroir and a nod to Europe’s most elegant, restrained styles (think the stately Saint-Estèphe reds and you’ll get close). These are Napa reds practically tailor-made for Right Coast wine geeks – tight without being taught, lean without being languid, fruity without being flirtatious.

In other words, at their best these wines can be tear-inducingly good.

The 2000 Corison Napa Valley Cabernet Sauvignon is really just coming around, for example, and it’s stunning – juicy, with a touch of earth and leather, the red and black fruits are dense but dancing, like those hippos in Fantasia.

The 2001 is leaner, with a lot more earthiness but still striking in its acidic structure. 2002 (my least fave of the bunch) was almost Syrah-like, only with boatloads of minerality and leather. 2003 was a different animal entirely, a total spice box with fine tea on the side, but again that minerality shone through; it was svelte, tangy and demanded food. 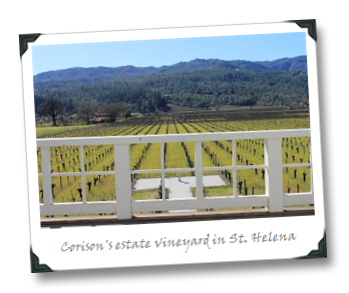 Cathy’s 2004 Napa Valley Cab shows much fruitier and full of black and blue berries, but those leather and stones and earthy minerals were still the undercurrent, and the long finish was red and tangy.  2005 might have been my personal fave – Dark and funky, cassis all the way, truffles and such a delicate mouthfeel, but grippy and structured, too. When this wine shut down it was an odd bird, for sure, but when it opened back up? Killer.

The question for me, then, was how is this kind of restraint – where a mineral undercurrent of place exists along with potentially-endearing vintage-variable aspects floating on top – possible in Napa Valley, home of ultra-ripe, balls-to-the-wall reds? In other words, why aren’t these wines clocking in at over 15% abv?

“Picking [earlier] is the only method for managing alcohol,” Cathy told me. Occasionally she does “add a small amount of water back” in rare cases where there’s a drought or severe heat spell right before picking. But that’s it – what you get is mostly a matter of the nuances of location and timing.

Personally, I don’t care what this serious little lady with the schoolmarm glasses does to her wines, so long as they remain this alive and this good over time; she can send them to outer space to have alien monkeys shoot magical ray beams at the barrels of juice for all I care. And no offense meant to Galloni but I don’t give a rat’s ass what The Wine Advocate scores these wines (in case you were wondering, apparently that tasting with him went just fine).

Let’s get to the more recent releases, because they’re worth talking about: 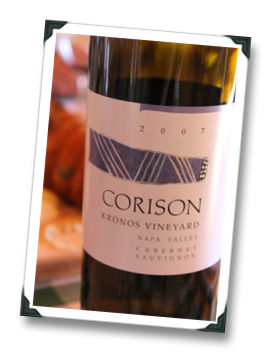 A riper, darker take on the signature mineral-driven, poised Corison style. The fruit is dark and the blackcurrant is leading the charge, but the intense stony minerality is still there tying everything together in a neat little tasty package for you. The wine isn’t shy about its power; it’s grippy, with depth and tension. In other words, it’s lovely and firm at the same time, and will need a few years to unfurl, at which time it will make an excellent dinner guest for your most elegant date night meal.

My tasting note literally reads: “this wine is a trained pet black panther; muscular, dark, earthy, taut, with a brilliant, piercing gaze.” Yes, I was spitting and no, I wasn’t buzzed. The comparison just… fits. I think the black panther is wearing a diamond-studded collar as well. You will just have to taste it to see what I mean, at which time you will totally be inside my head (you’ve been warned!).

11 thoughts on “Out Of Time: Peeling Back The Layers On Corison The Wine, And Corison The Matriarch”