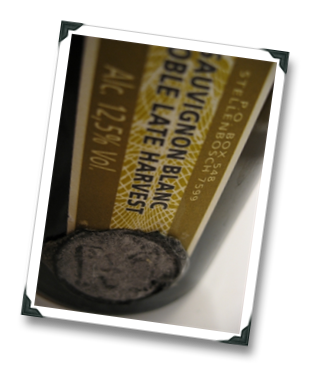 What do you do when you and your spouse / significant other /favorite pet / whatever find yourselves double-booked for holiday party engagements?

If you’re me, you declare defeat, play holiday party hooky and instead grab three bottles from the samples stash and go out for a “date night” dinner alone to reconnect.  That’s what we decided to do last Friday evening (with apologies to anyone involved in the two holiday parties that we ditched – it’s nothing personal), and the time away from the holiday hustle & bustle allowed me to make a few reflective observations about the more recent ‘state of things.’

For instance: reconnecting with someone isn’t simply a matter of having great food and really good wines – though those two thing help immensely in the process.

But you’re not here for the Dude personal matters, you’re here for the wine, right?  Well, I made some reflections on that stuff, too:

Let’s address each of these tidbits apiece, shall we?…

First, Napa is really turning up the heat in trying to represent some of its harder-to-come-by wines (pre-public-release, to boot) to bloggers, if my sample bins are any indication.  And, since you told me that you want to hear about those kind of wines, here’s my take on two that shared the dinner table last week.  Also, before you ask – No, I’ve not yet sorted out my wine sample storage problem.  Yeah, I know, I know…

First up was Smith-Madrone’s recently-released 2007 Chardonnay.  Smith-Madrone hails from Napa’s Spring Mountain district, and is named party for its management (Stuart Smith – Managing Partner, Enologist, and Charles F. Smith III, Winemaker) and partly for the Madrone evergeen trees on their property.  According to Stuart Smith, “It sounds better than Smith-Douglas Fir, Smith-Manzanita, Smith-Oak and certainly Smith-Poison Oak. These were the predominant trees and shrubs on the property when we began.”

Not only was the Smith-Madrone a welcome departure from the often (too) heavily-oaked Chardonnay being made along Highway 29, it’s also fairly priced at $30 (another nice departure from the usual Highway 29 fare).  There’s tropical fruit, but also a broad spectrum of stone-related flavors and aromas (pear, minerals), all in a nuanced and elegant taste presentation.  One thing I wondered after visiting smithmadrone.com – are the Smiths ever worried about copyright infringement lawsuits from Smith Brothers?  I mean, the names and the beards… I’m not sure I’d buy that it was a coincidence:

Anyway… second wine of the night also hailed from Napa (Oakville this time) and is small-production: Swanson Vineyards’ 2006 “Alexis” Cabernet Sauvignon. Swanson clearly positions Alexis as a flagship Cab offering (there’s also 19% Merlot in the `06), and it’s given the heavy Napa treatment (28-day maceration, malolactic in barrel, 22 months in 60% new French oak) – with a price-tag to match ($75).

2006 was a long, cool growing season for Oakville and the wine is definitely tipping the scales on the side of ripe fruit – blackcurrant is the dominant player, and black cherry, vanilla and a jammy mouthfeel make the wine drinkable now.  Here’s the rub – the Alexis was being really, really shy about revealing where it’s going. It’s intense and the nose is superb, but the finish is like a long, hot summer in alcohol land.  Overall I was impressed, but I wasn’t sold on when the wine would lose the heat and integrate, and at $75 I expected it to have an easier time of telling me what it had to say, other than “drink me early, you know you can’t wait!”

Finally… we get to South Africa and the whole “92-points for a flawed wine?” thing.

I finished off the date-night meal with a ‘sticky’, Mulderbosch’s 2006 Noble Late Harvest Sauvignon Blanc from Stellenbosch.  I think this wine is what the WSET had in min when they told us to indicate “luscious” for sweetness when blind-tasting wines on the exam.  This wine is over-the-top, full-on, go-for-broke late harvest SB – 20-year-old vines, French oak aging, and 6 months on the gross lees.  The result is liquid nectar with tropical fruit jumping all over the place, and focused acidity just kicking your ass, and a finish of citrus pith & honey… it just rocks the Casaba. The only thing I noticed that was slightly untoward was a hint (and I’m talking a hint) of burnt rubber tire on the nose.  A smidgin. The kind of aroma that is hardly detectable until someone points it out to you.  Day two with the Mulderbosch yielded the same result for me.  But overall a stellar wine and easily worth $35 if you can find a bottle (fewer than 400 cases were made).

I certainly wouldn’t kick the Mulderbosch outta bed for eatin’ crackers, because it’s a hell of a good wine; maybe that’s the same logic that Wine & Spirits and Wine Spectator both had in mind when they awarded it 92 points.  My intention is not to call out here that W&S and WS were somehow negligent in awarding such a high score to a potentially flawed wine – the flaw was minor and there’s no telling if their samples had a similar flaw.  But, I find it fascinating that a high score could be given to a flawed wine.  Is it that the flaw doesn’t detract from the overall experience of the wine?  Or the tasters didn’t notice it?  Or someone else scored it high and there was pressure to yield a similar score?  None of the above?

It just makes me glad that I don’t use a point system – I think it would make me go insane.

12 thoughts on “Of Spouses, Samples and 92-Point Flawed Wines”