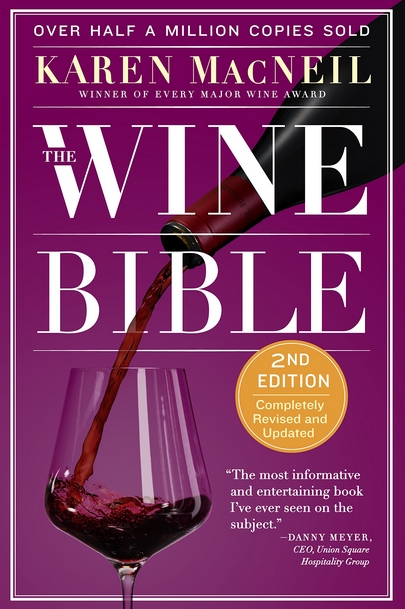 There are, of course, those wine tomes that transcend the superfluousness of their wanna-be peers, two of which I was lucky enough to receive as updated editions of products that I already though highly enough about to have purchased them on my own. With actual money and everything!

And so, those two re-releases are the focus of this month’s wine product roundup. They are works that, I think, are indispensable resources (the first for budding wine enthusiasts, and the second for anyone – consumer or pro – who loves the world of vino):

MacNeil’s Wine Bible holds a sentimental place in my heart, which will probably come as a shocker to anyone who has seen Karen and I interact together publicly (a sight that is almost always a strange mixture of civility and awkwardness, as I am pretty sure that she has absolutely no idea what to make of me… and I can’t say that I blame her). As I told Karen a few years ago, I used the first edition of her book as a welcome escape during the frigidly cold couple of weeks I spent in Toronto while my younger brother was having life-saving heart surgery performed there. I’ve heard many criticisms of The Wine Bible over the years, none of which I felt held much water aside from the fact that the details in it were becoming outdated, a situation now rectified in the excellent 2nd edition.

My wine career arc has more or less followed the publication history of this book, from newly-intoxicated wine consumer at its first printing, to a guy who can nitpick the shorter entries on emerging regions and play with some authority the “agree/disagree” game with some of the hand-selected wine picks in the second edition.

Thankfully, MacNeil has changed little of the two elements that really make The Wine Bible work. The first is the country-by-country format, which is ridiculously intuitive and works as one of the best wine-focused primers for which any wine newbie could ask. The second is Karen’s populist-style writing, which clearly demonstrates that she was and still is ridiculously excited about her subject; MacNeil encourages the joy behind wine exploration, which is one of the most important resources we can provide to any new wine lover.

The Oxford Companion to Wine, 4th Edtion (Oxford, Edited by Jancis Robinson and Julia Harding, about $50)

With almost 200 contributors, the Oxford Companion has received a rather serious and significant once-over. As insanely authoritative and useful as this new edition is, it’s a testament to how well-executed this (altogether too heavy) reference book has been over the years that the previous edition was still my go-to wine reference book, hardly showing its age.

Sure, you can find most of the info. in the Oxford online, but what you won’t get is the killer one-two combo of attention to detail and nearly flawless prose that makes the reference such a gem (for a great example, look up the term “wine writing” therein, and try not to chuckle and its poignant accuracy and subversive cheekiness). The usefulness and depth of the information presented is without parallel (an example: after two years of working with the FurmintUSA project, there’s little background information about the grape that I don’t know at this point… two pieces of which I read in the Furmint entry in the Oxford!).

Jancis will no doubt hear the shrill sound of freshly-clipped nails grating the chalkboard when I write this, but I found a few minor typos (sorry!). Minor enough, however, that they won’t stop me from saying that if you’re involved in wine in any capacity and don’t have this book, you’re probably an idiot.

2 thoughts on “By The Books, Buy The Books (November 2015 Wine Product Roundup)”