[ Editor’s note: here’s one more from the vault of pieces sent to a magazine that didbn’t publish it or pay me; I’m running it here so that it’s not lost to posterity. Enjoy! ] 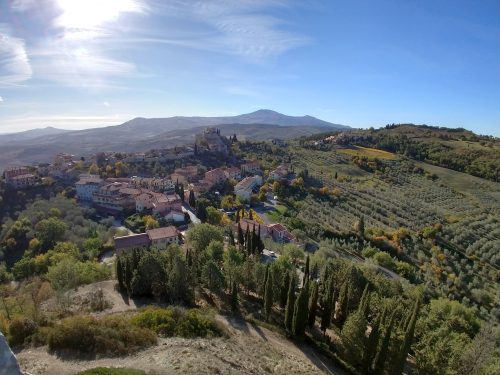 Donatella Cinelli Colombini could be your Italian grandmother. Affable, generous, and quick-witted, Colombini is the matriarch of Fattoria del Colle, her family estate in the almost unbelievably charming area of Tuscany’s Trequanda, replete with accommodations on an estate that dates back to the late 1500s, cooking classes, three pool, a spa, and an upscale-farmhouse restaurant. She also also oversees production of the Tuscan wine label that bears her name.

But Colombini has another job: in some ways, she’s trying to save the future of what the Consorzio del vino Orcia calls “the most beautiful wine in the world.”

“The landscape here is a perfect harmony between history, man, and nature,” she remarks. “We have to preserve that. Every month, every wine producer here receives a call from a realtor asking them to sell.”

While you will almost certainly have heard of the winemaking gems of Montalcino and Montepulciano, you probably aren’t familiar with Orcia, the winemaking area that sits between them near Tuscany’s southern tip. The problem isn’t that Orcia’s twelve municipalities, formally recognized as a wine region in 2000, don’t make excellent wine; in many cases, Orcia’s reds rival those of its more famous neighbors, planted on vineyards that have been literally designed from the ground up for producing small quantities of high quality fine wine grapes, primarily Tuscany’s “native son” of Sangiovese. The problem is that Orcia is almost too amazing of a place in and of itself.

Orcia boasts the kind of beauty that makes you think that you’ve stepped directly into a scene from Under the Tuscan Sun. Think sun-drenched hillsides lined with cypresses, dotted with tiny ancient towns like Pienza (housing a terracotta museum), terme thermal spas like those in S. Casciano dei Bagni and S. Quirico d’Orcia (yes, some of the spa treatments involve wine), and no shortage of gorgeous castle tower ruins along the routes between them all, replete with deep history and past political intrigue (the region once played host to the duke of Tuscany, who ordered the draining of the the valley in the 1700s to spur agricultural growth, but also used his time there to liase with his mistress). Orcia has seen travelers since the time of the Etruscans, and its castle and fortress ruins are a testament to the popularity of the routes within the area, where bandit attacks once were frequent. It has hosted religious pilgrims, popes, poets, archbishops, mercenaries, dukes, the Medici clan, and even Charlemagne. The landscape has remained relatively unchanged for the last four hundred years…

Given its embarrassment of natural riches, it’s not surprising that Orcia now sees nearly one and half million tourists per year. Agritourism is big business in Orcia, where visitors can experience firsthand the direct connection to the land and the historical perspective of farmers who, as local winemaker Roberto Mascelloni puts it, “produced everything for themselves.” Most of the wine purveyors in Orcia also make boutique quantities of olive oil. You can find handmade pecorino cheese production (which dates back to prehistoric times in the area), such as that offered by the Podere Il Casale farm (yes, some of the cheeses involve wine grapes). Orcia boats a small but booming white truffle economy, which is the focus of lunch-and-tasting tours offered by winemakers and truffle hunters such as Loghis Farm’s Valentino Berni, who started farming truffles with his family’s pets when he was six (“I loved the relationship with the dogs” he notes, in a characteristically charming Tuscan way).

Truffles are so important to the area that San Giovanni d’Asso has a small museum and an annual festival devoted entirely to the expensive subterranean mushroom. There are enough such quaint spots in Orcia to almost lose count of them all, and we haven’t even mentioned the stunning views available from the region’s various hillside medieval ruins, Orcia’s saffron production, its several art/culture festivals, or the area’s innumerable possibilities for biking and hiking tours.

The main challenge facing the region’s wine producers is that, despite the high quality of their wines and their focus on organic, sustainable viticulture, Orcia’s status is the wine world hasn’t kept pace with its notability as a tourist destination. Orcia is dwarfed in this regard by Montalcino and Montepulciano, in terms of recognition and in availability; only about two hundred fifty thousand bottles of wine per year carry an Orcia designation on the label. Most of Orcia’s sixty wine producers are tiny in scope, and so are catering to tourism, local restaurants, and olive oil production to help them stay in financially in the black.

The irony is that Orcia’s success has garnered so much interest from businesses and the wealthy that one of its now key components – its excellent and diverse wine scene – is almost endangered. In many ways, Orcia’s wines are well deserving of the attention of any Italian wine lover; they offer authentic alternatives to the more ubiquitous (and too often industrialized) Chianti on one end, and to the pricey Montalcino on the other.

Ultimately, it’s the unique connection to Orcia’s land, foods, and people that can draw wine lovers in and, quite possibly, give you a new favorite go-to Tuscan sipper. “Each bottle,” notes Colombini, “gives you a story of this wonderful territory.” Here are a few of those stories. 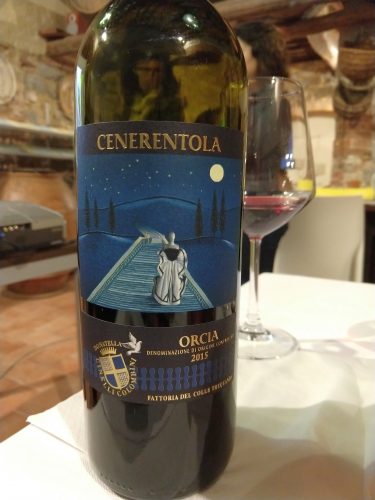 The Cinderella of this wine’s name refers, in part, to the round-leafed grape Foglia Tonda, which makes up thirty-five percent of this blend (the rest being Sangiovese). For nearly a century, Foglia Tonda was all but abandoned in Tuscany, due its difficulty to ripen. Cinelli helped to lead a charge to bring the grape back, and there are now about twenty hectares of the grape planted. Cinelli describes this blend as “well-married,” and her take is spot-on. The Sangiovese brings delicate floral notes, tart dark cherry fruit flavors, and earthiness, while the Foglia Tonda adds unique brambly spice and black licorice tones.

The fanciful name is an homage to Loghi Farm’s vineyard soils, on which the grapes for this Sangiovese and Colorino blend are grown. While much about Loghi’s production and truffle farming harken back to rustic times, this is a more modern take on Tuscan red wines. It sports plummy, juicy cherry fruit flavors, and aromas of orange peel, vanilla, and dried herbs. It’s fresh, vibrant, and almost sinewy in its powerful mouthfeel.

Sasso di Sole is in an enviable spot, even by Tuscan standards; not only do they have breathtaking views of their UNESCO area hillside vineyards, but their organically-farmed property overlaps the northeastern edge of Montalcino. This gives them the luxury of being able to use either the Montalcino or Orcia designation on their labels. In contrast to most of Orcia’s other producers, Sasso di Sole use their youngest vines and shortest wood aging period for their Orcia label, resulting in a supple, vibrant, tangy, and fruity Sangiovese that’s ready to drink now. The hints of tobacco spice and rose petals are an added bonus. 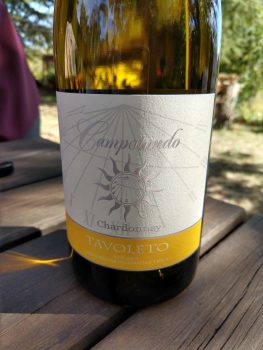 This tiny outfit (producing only eight thousand bottles of wine per year) sits near an extinct volcano near the small hamlet of Campiglia d’Orcia. It’s helmed by Paolo Campotondo, who hand-tends Orcia’s only goblet-trained vineyards (a recommendation by the elderly locals, who recalled similar vine training systems used near mountains in France). The unique training helps to protect the vines, planted nearly five hundred meters above sea level, from the strong winds of the area, and helps to retain warmth from the soil and concentrate the grapes’ flavors. Paolo’s daughter Helena inspired his focus on organic farming principles: “my father says, ‘my daughter is the first consumer of my product, so I want it to be healthy!’” Uniquely, their Tavoleto is a white made entirely from Chardonnay, and it’s beguiling with flavor and aroma layers of peach, white flowers, tropical fruits, toast, wet stones, ripe yellow apples, and ginger spice.

One of the specialties of Campotondo is a focus on Tuscany’s indigenous red grape Colorino, which makes up ten percent of this blend with Sangiovese. This is a full-on, Brunello-style red, with dense black cherry fruit flavors, intense aromas of dried herbs, orange peel, wood and cigar spices, balsamic, and dried rose petals. You’ll want a healthy portion of wild boar ragu pasta to go with this.

Luca Zamperini seems to have a permanent smile etched onto his face, and you might, too, if you lived his life. His Poggio Grande winery started as a hobby seventeen years ago, and now produces twenty-five thousand bottles of wine per year. It includes sweeping views of the area near Ripa d’Orcia, and is the home to horses that run in Sienna’s famed and ancient Paleo race. Zamperini has a love of French Rhone wines, and so auspiciously decided to try out Syrah, which has taken splendidly to the Orcia climate and shows off the region’s diversity. Like Poggio Grande’s horses, there’s a tamed wildness to this focused and delicious wine, which is mineral, savory, plummy, and juicy, with hints of wild herbs and even game meat.

Alberto Turri and Anna Becheri moved from the banking and media worlds in Milan to a picturesque spot in the heart of Orcia’s terracotta country, producing wine, truffles, and twenty thousand bottles of wine per year (with whimsical labels designed by local artist Enrico Paolucci)as a labor of love. They make for an unassuming couple, who have very clear ideas of what they want from their wines, and the results are excellent. Their Tribolo Sangiovese is layered, supple, and sexy, but despite its modern appeal doesn’t lack for structure, vivacity, complexity, or precision.

From five hectares of hand-worked vines comes one of the most unique Sangiovese offerings that you’re likely to ever encounter. The Capitoni family ages this particular wine in the region’s famed terracotta amphorae, and using what they describe as “slow and low” fermentation (taking longer than normal, and at lower temperatures). The result is a rustic, intriguing take on the purity of Sangiovese, highlighting its bright, tart red-berry and cherry flavors, its vibrant texture, and its dark tobacco spice notes.

The amiable Roberto Mascelloni is a stickler for old-school farming, producing spicy and herbal olive oil and organically farmed wines on his family estate in Castiglione d’Orcia. A former archer in a regional festival, “01” marks the last year that he won the archery tournament (“and then I retired”). This wine sports an intensely purple color for Sangiovese, and it strikes a great balance between that grape’s herbal, spicy, and rustic side, and its elegant, lively, and supple side.

Valdorcia Terre Senesi winery’s Antonio Rovito and Gabriella Ginetti seems to always be laughing at something. You’d be pretty happy too, if your daily view included stunning views of the Orcia gorge, Ripa d’Orcia woodland wildlife sanctuary, and Mount Amiata. Terre Senesi began with olive oil production in 1998, and started producing wine in 2010. Their Ripario is a Sangiovese blended with a small amount of Cabernet Sauvignon, and aged in new French oak barrels. While the result is on the woody side, the wine has enough complexity in it black licorice and black cherry fruit flavors, dried herb and balsamic notes, and palate freshness to age well (and pair well with a good steak off the grill).