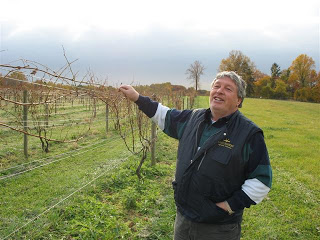 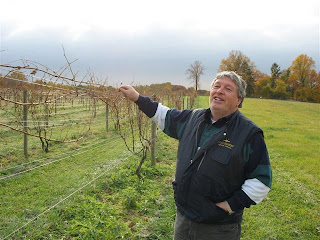 “No shortcuts – either you do it, or you don’t do it. You either believe in yourself and commit to the idea to spare no expenses, or you close your doors.”

Either it’s done full on, or it’s simply not done at all.

This was the primary thought running through my mind as I followed Gino from his winery and wine import business in Eddystone, PA (a stone’s throw from Chester, which is sometimes Philly’s equivalent of war-torn Beirut) to the idyllic setting of his vineyard and quaint tasting room in Chadds Ford.

It didn’t help that Gino takes corners at speeds that would make Mario Andretti proud, or that I’d spent most of the morning tasting samples of the wines that Gino had in barrel (most notably his latest Chardonnay vintage, which, as he put it “might be the best wine I ever made… if I don’t screw it up!”).

I was first introduced to Gino and his wines via a wine pairing event at Teikoku restaurant near Philadelphia. Gino’s Chardonnay blew me away at that event. What I tasted in barrel at the Penns Wood winery had even more promise. My curiosity at exactly how Gino was able to pull of wines of this caliber in PA – hell, for that matter, on the East Coast – led to me scheduling some time with him to discuss his winemaking mojo…

For anyone familiar with the perception of PA wines, it’s hard to convey the extent to which Gino may be rewriting the rules of how wine is made here. His wines achieve levels of fruit extraction that have never been reached by some California producers, let alone anyone on the Right Coast. When I arrived at the winery, Gino was preparing for an upcoming tasting that would feature some of his top-end wines. For comparison, he had selected wines such as Chateau Angelus and Puligny-Montrachet. He was prepared to compare his wines with what some consider to be the world’s best. Uhm… aren’t we talking about wines made in Pennsylvania here? 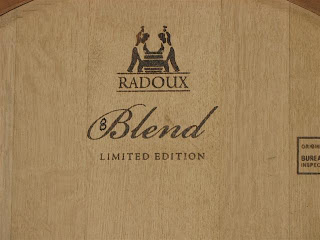 This confidence isn’t entirely a matter of hubris (or insanity, at least I don’t think it’s insanity). “I want to change people’s perception of Pennsylvania wines,” Gino told me. While he doesn’t expect his wines to necessarily be better than the world’s best, “I d0 expect to have [the tasters’] heads blown up when they taste my wine.”

It’s not that PA isn’t without it’s winemaking challenges: at 2,000 cases a year, Penns Woods can’t break into a market run by an iron-fisted monopoly; with a short growing season, Gino needs vines that encourage quick phenolic ripeness to achieve good color and complexity – exactly the opposite of what most nurseries are providing for California.

The inconsistent continental PA climate doesn’t always cooperate with fine winemaking, either. Gino’s red Bordeaux style blend, Ameritage, won’t be made this year due to the quality of the red grapes. “If you don’t have the chicken, you ain’t gonna make the soup,” said Gino. (It’s not all gloom and doom – the whites “are fabulous;” after some time in barrel, a low yielding Cabernet Franc is also looks promising.)

No expense-spared winemaking is pretty much the only winemaking that Gino practices. Not surprisingly, his wines are pricey. “I’ve been told my wines are expensive – what do you want me to do? When I give something to the consumer, I need to say ‘Hey, I did my best.’ If it’s no good, I won’t put it out there.”

And as I came to find out, Gino has pretty high standards for “good.”

A stone’s throw from the Philadelphia airport, Gino is pouring a significant investment into Penss Woods and its final bottlings. His corks run upwards of $2 (“your cork is your insurance policy”); he’s installed a horizontal rotary fermenter that ensures controlled skin contact and maximum extraction (it’s not cheap), and he donates a portion of the proceeds of every bottle sold. He has a near-obsession with cleanliness (which made me feel bad for his right-hand man, George, to whom Gino was passing cleaning task after cleaning task during my visit), which also doesn’t help the bottom line. “I pay extra attention to the cleanliness,” he told me. “Everything must be absolutely clean. A clean winery only hurts your pocket.” 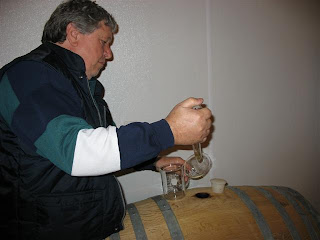 An immaculate, high-tech winery is one answer to the challenges of winemaking in PA, but Gino was quick to point out that he’t not making ‘Franken-wine’: “There isn’t one thing that makes your wine better. It’s the adding up of little steps. There’s no secret.”

Gino’s take on Go Big or Go Home winemaking probably came from his roots (ha-ha!) in Italy. Gino grew up around wine. He’s from Abruzzi, a large area of wine production in southern Italy. “When I first came to the U.S. around 1971, you didn’t find much Montepulciano,” he told me. Smelling a potential fortune, Gino started importing the wine – and soon realized why there wasn’t much Montepulciano to be found in the U.S. “It was so heavy and tough to drink. America loves sweets, and they like a softer mouthfeel.” In other words, nobody bought it.

As Abruzzi evolved from a bulk producer to an area producing fine wines, Gino began importing the newer, easier-drinking wines, which sold enough to support his budding importing business. “I see similar parallels to Pennsylvania now and Abruzzi 30 years ago,” he said. “It’s a rougher industry. It was done by people with a lot of heart; their enthusiasm was bigger then the available knowledge. They didn’t know what grapes to plant, or how to best make the wines. They did the most they could to learn –Eric Miller [winemaker at Chaddsford Winery] was the pioneer – there were no experts or viticulturists around to learn from.”

Gino’s introduction to Pennsylvania winemaking was not a positive one. “I was not convinced that it was possible to make good wine in Pennsylvania,” he said. While consulting at a PA winery, Gino’s opinion started to turn more favorable, and he wondered if PA had more to offer in the wine world than he’d originally thought. He called his friend, Italian eonologist Concezio Morulli, and invited him to PA for a motorcycle tour of the local vineyards.

After seeing the prevalence of expensive (and locally inappropriate) Scott Henry trellis system used on the PA vines, Concezio wasn’t impressed (“My God!” he told Gino, “how would you like to work everyday upside-down hanging by your feet!”). He didn’t think much more of PA winemaking either, after tasting a few samples from the local wineries.

Undaunted, in 2002 Gino sent some PA grapes to Asti in Italy for analysis. The result? “They told me, ‘the grapes are really good – go ahead and make wine out of them.'” Gino purchased grapes from Jan Waltz in Manheim, PA and crushed about 7 small lots. The resulting wine was “absolutely phenomenal.” Gino blended Cabernet, Petite Verdot, Merlot, Cabernet Franc, Carmenere, and Sangiovese – the Ameritage was born. When Smithbridge was ready to sell their 38 acres of Chadds Ford vineyard, Gino saw an opportunity to expand production and help recoup some of his ever-increasing costs.

Anyway, weren’t we speeding on our way to Gino’s vineyard? The picture there wasn’t anywhere near as rosy as it was in the winery. 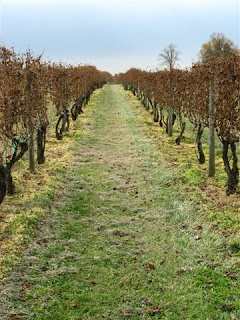 Gino is starting with a decent base – 30 year old vines, on much more PA-appropriate VSP trellising, planted in stony, clay and loam soil. “The stones are a pain,” he said, “but they’re great for the wine.”

That’s where the fun ends.

Previously, the vines were poorly maintained, planted too low to the ground (promoting fungal problems) and permitted to grow way, way too long. In some places, the vines are planted a staggering distance from each other in their rows. There is clearly still a lot of work to be done.

Gino and I strolled through the vineyard as the autumn chill started to take over in the air. We were picking and tasting what grapes remained on the vines – those that hadn’t been harvested, or stolen by the birds, anyway. “It reminds me of when I was seven years old,” he said with a smile, “going through the vineyards in Italy after the leaves fell, looking for the leftover grapes.”

The taste difference between the clusters on the lower portions of the vine and those at the top (called “Seconds”) was staggering. The fruit on top was clearly under-ripe, in stark contrast to the sweet, luscious berries closer to the ground. “I told the guys at harvest, anything above the third wire, don’t pick it. Look! Not even the birds want the ones on top!” exclaimed Gino as he tossed a small cluster onto the ground. “Can you imagine if I put it into my wine?”

When you get three barrels of wine from thirteen rows of Chardonnay grapes, it’s no wonder the wine is expensive. I asked if biodynamic practices might help the situation. Too risky, according to Gino – especially considering the unpredictable Mid-Atlantic weather – and there’s too much work to be done in the vineyard before considering a big change in farming technique.

For now, there is much mojo in Gino’s wines (the upcoming whites especially, which have tropical fruit notes and good minerality), even if there isn’t too much mojo in the vineyard. Drinking Penns Woods Amertiage, it’s easy to appreciate the expense and effort that’s going into each bottle.

Whether or not the rest of the winemakers in PA, or on the East Coast, will be able to consistently rise above their vineyard challenges and rally behind Gino’s vision of no holes barred premium winemaking… well, we’ll just have to sip, wait, and see. 6 thoughts on “"No Shortcuts": How Penns Woods is Reinventing Pennsylvania Wine From The Top Down”