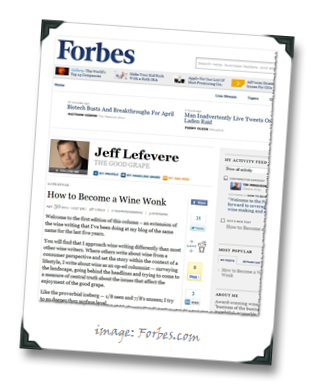 And I mean that in the best possible way, which is to say that it’s not the same “holy crap!” that I exclaim when our recently-acquired rescue “dog” (dog is in quotes because he’s closer in size to a small horse) dumps on our carpet every other day.

No, this is the kind of “holy crap!” that’s shorthand for “OMG that is so f*cking AWESOME! A++++,” the kind of feeling the wiseguys in Goodfellas had when they thought that Tommy DeVito was getting made (now that I think about it, I really hope that this doesn’t actually turn out the same way as it did for Tommy…).

Anyway, my reaction, which carries my typical levels of subtlety (i.e., all the subtlety of an cheesy action flick in which someone drives an eighteen-wheeler full of nitro glycerin off of the Grand Canyon) is in response to the news that my friend (and one of the most insightful people that I’ve ever met), Jeff Lefevere, the voice behind GoodGrape.com, is now writing the wine column for the Forbes.com blog.

Another friend of mine (I like making friends), Steve Heimoff, blogged about this happening yesterday, and when commenting on Steve’s well-thought-out post it occurred to me that Jeff’s new stint stands as reminder of how powerful social media tools are when wielded by talented and powerful enough hands. They can land you at Forbes – not a bad neighborhood, people!

Jeff’s writing style is about as perfect a chocolate-meets-peanut-butter match for Forbes.com as anyone could reasonably hope, and while I’m sure he doesn’t need it, I’m offering up all of the support and positive-good-vibes I can muster for him in his new endeavor.  I’m pretty sure the Forbes.com readership is gonna love him, and  I’m looking forward to seeing where Jeff takes things from here – not just as a friend, but as a fan.