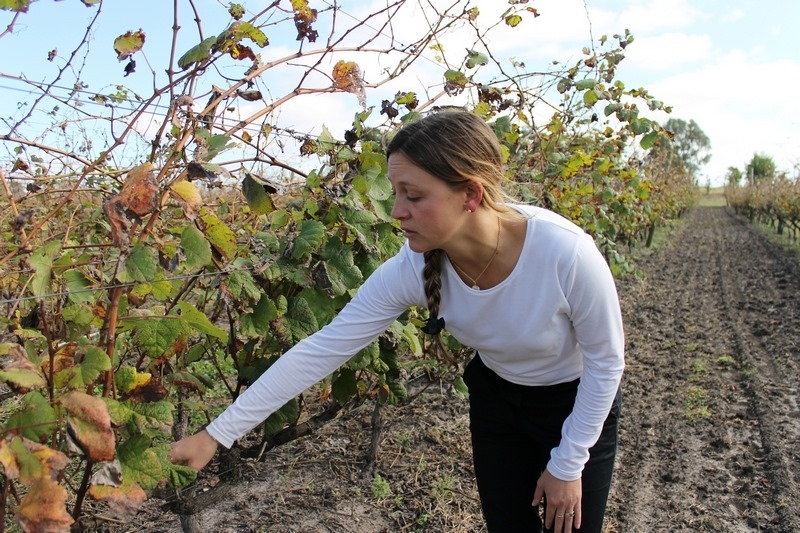 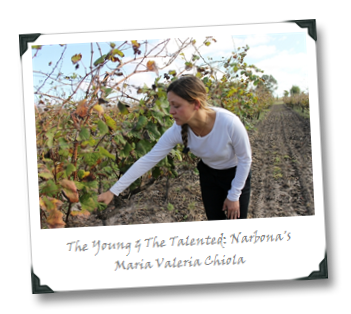 In Carmelo, about three hours drive from the bustling city of Montevideo in Uruguay, along the river that divides the country from Argentina, there exists the picturesque hamlet of Narbona, the kind of place with such  overwhelming quantities of irony that it causes story-relating fingers like mine to nearly freeze at the keyboard.

It’s probably best to start with Winemaker Maria Valeria Chiola. Female winemakers aren’t exactly the norm in the relatively conservative sphere of Uruguayan winemaking, but the ironic (or maybe just surprising?) thing is not her sex, but the fact that twenty-eight year old Chiola is, at such a young age, making some of the best wine that I tasted during my travels there. And she has almost no sense whatsoever of what a powerful example she could be for the promotion of wine in Uruguay abroad, mostly because the cult of winemaker personality that dominates the fine wine media in the U.S. is pretty much non-existent in that small country (another irony). 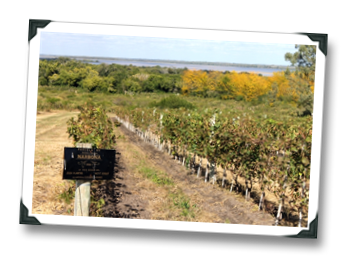 Chiola has some pedigree, of course: her father has a winery in Canelones and she’s worked at Miner (among other places). She claims winemaking duties fall exclusively to her, an intern, and infrequent consultation with Michel Rolland (Rolland himself meets with her only twice per year). She suggested that there is healthy tension between the winemaking styles she’s after and the styles that are being pushed by the Rolland consultants.

Whatever is going on between tenderfoot winemaker and veteran consultant, much of that tension seems to be working in the wines’ favor. More on that in a minute or two, after we visit some of the other ironies dripping from the Narbona story…

Frenchman Juan de Narbona founded the first winery on the property in 1920, growing primarily Pinot Noir and Tannat; he was a quarry-man who supplied stones that helped to build Buenos Aires across the river, and built the stately Narbona house on the property in 1909. In the 1950s, the property entered into a state of disrepair and abandonment, until it got on the radar of Argentine hotelier and developer Eduardo ‘Pacha’ Canton in the 1990s. 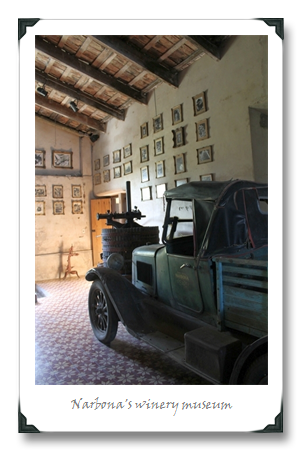 Pacha fell in love with the place, and decided to restore it to its former glory (the site is now partially a National Historical Monument in Uruguay). He established a restaurant, inn and most recently a new winery – one that is aesthetically pleasing but, with relatively narrow, old-timey, bi-level staircases leading down from an open center into the barrel room, it seems one of the more poorly-designed and difficult to work designs I’ve yet encountered in a modern winery (ironically, wine quality seems unaffected). 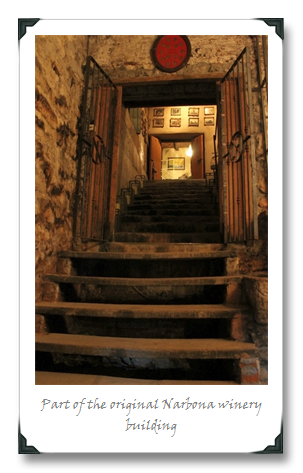 If he’d known what it would take to get the place back on its feet, Pacha might not have bothered to start; renovations took almost exactly 100 years from when the house was first built, most of the work finishing by 2009. Narbona now makes 60,000 bottles of wine a year, exporting around 80%, much of the production being the value brand Porto Carmelo. The land is also a working farm, producing cheese, milk and other food products.

The former winery building is now a museum celebrating the winemaking of the previous time and the property on which it was founded. The ironic part (you knew that was coming) is that nearly everything at Narbona is made to look old, so that (apart from the obvious modern conveniences) it’s nearly impossible to discern what’s original and what isn’t without a guide to point it all out. If it wasn’t for the occasional ringing of cell phones, upon stepping into the restaurant on the bucolic property one might be forgiven for thinking he’d actually been transported back to about 1918. 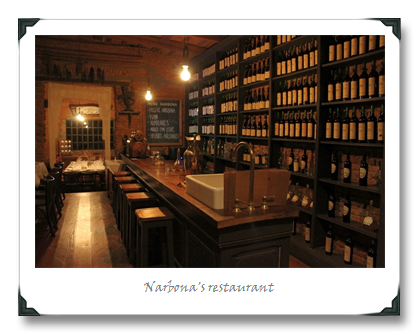 Also ironically, the vineyard plantings mimic those that might have been in use in the early 1900s, despite the fact that they make viticulture more difficult. They planted using the lyra vine training system, mainly because that’s what the neighbors (long-standing producer Irurtia, where Narbona’s wines were made until the new digs could support production of the 2012 vintage) did. According to the soft-spoken Chiola, it’s now a constant struggle for quality versus quantity of fruit (though it’s working). The plantings are mostly on calcareous soils, not unlike the Narbona former seabed quarry (see inset pics of fossil evidence from the property), on a small amount of land that abuts the property and pushes out to the Rio de la Plata river plate. 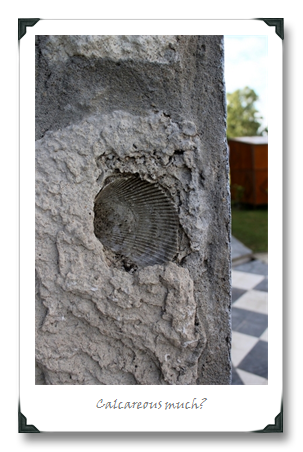 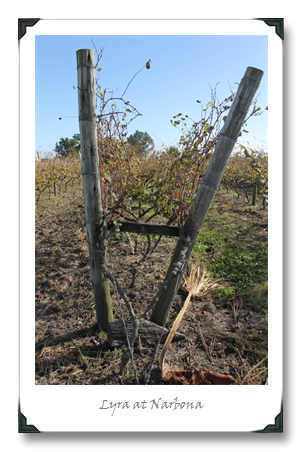 So… to recap… we have an historic property now reborn making modern wines in an environment that’s made to look old, with an aging consultant providing advice that may or may not be fully followed by a much younger winemaker who seems to have little sense of her own innate talent.

For me, this is the wine equivalent of The Cask of Amontillado in terms of irony volume, and I mean actual irony and not the fake “irony” in the Alanis Morissette tune Ironic (which technically has no irony in it whatsoever, it’s merely a list of things that suck when they happen to you though none of them are actually ironic… except, perhaps, the title, but I’m not sure that was the game that she was playing when she wrote the tune… okay, whatever…).

Oh, they also have a dog named Wilson, though I found nothing ironic in his behavior… so far. He was actually much more of a straight-shooter-style character. 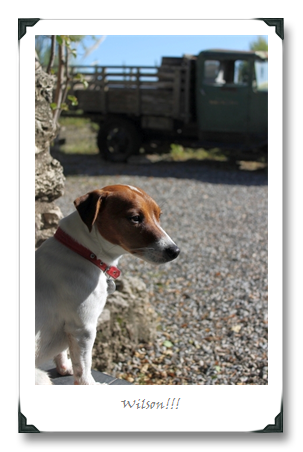 Narbona makes a few whites and a rosé, but I’m going to focus on the three reds that most stuck with my memory when I tasted them with Chiola (I was a guest of Wines of Uruguay for the trip, and stayed one night in Narbona’s wine lodge, in the non-ironically-titled Tannat Room):

For all of its red berry jamminess (which you might expect from the interior of Uruguay), this is a vibrant Pinot (which you might not expect). There are hints of citrus and tea leaf, which for this dude are the calling cards of the Pinots that I most enjoy drinking. While it is abundantly fruity (svelte PN lovers beware!), there’s good structure on the bones here with those tea-like tannins holding things up, like sturdy poles for a fruit-roll-up tent. 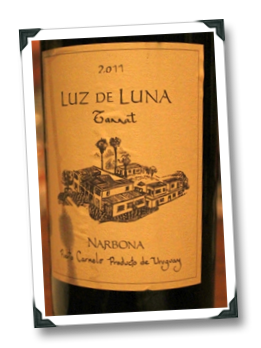 This wine wants to put a hair on your chest; like, an entire hair shirt. It’s the more Rolland-esque style wine of the Narbona bunch, I thought. Meaty, concentrated, very dark, very tight at first, densely-packed and demanding. It’s also very young at this point, though hints of interesting green and dried herbs begin peeking through after a few minutes in the glass, along with spice, leather and tobacco notes. For the reticence on the nose, it makes a grand, sweeping-away-of-the-curtains-and-steeping-into-the-spotlight-diva-style entry on the palate, going broad and grippy into a long finish. You will need to like it big, if you do, you will really like it.

From seventeen year old vines comes this single-parcel-sourced, tight and savory beauty. It’s got bitter dark chocolate, concentrated black fruits, dark leather, coffee, dried herbs, and… a fierce gaze into the blackest parts of your soul. It plays a bit of a switch on you on the palate, where it shows off the fresher side of Tannat’s acids, red fruits storming in to vanquish your attackers and carry the day on to victory, followed by a clean-up crew of darker plums and grippy tannins. I enjoyed this wine so much that the following day after tasting it, I more-or-less demanded that we drive out to see the plot in the vineyard, acacia thorns whipping themselves at my head as I ducked and weaved while riding standing in the back of Narbona’s small ATV. The crueler irony here is that the wine is probably not all that easy to find stateside…