The short answer to the question posed in the title, for the impatient among you, is “Yes.”

The long answer is considerably, well, longer… and a lot more complicated, but those who choose to brave its circuitous path will be rewarded with tidbits of French wine family history, geographical trivia, a short-list of ridiculously overachieving wine bargains from two of the Loire valley’s best Muscadet producers (who have chosen to go beyond the region’s simple-and-saline oyster-pairing quaffers), and a mustache that has to be seen to be believed.

But if you’re feeling adventurous…

The tale begins with a tasting of Domaine De La Louvetrie (and said mustache) at the 2012 Salon des Vins de Loire (that region’s annual over-the-top exposé of more than 600 producers, who pour their wares for the media and trade in elaborate booths in a convention center that spans the area of several Manhattan city blocks), and ends with a Luneau-Papin Muscadet from 1976 that showed no signs of slowing down any time soon…

Muscadet is the westernmost appellation in the Loire valley, near the town of Nantes, bordered on the north by Brittany, and pretty much as close as you can get along the Loire river to the coast of France without falling off of it. It’s the home of the Melon de Bourgogne grape, grown in a few sub-apps that together account for some of the largest amounts of still white wine production in all of France, the most “serious” of which is probably Muscadet De Sevre-et-Maine on Nantes’s southeastern edge. “Serious” here usually equates more to “austere-but-still-refreshing-with-seafood” than it does to “ageable-for-decades.” Bottom line: most people think of Muscadet as little more than a citrusy, minerally accompaniment to shellfish. 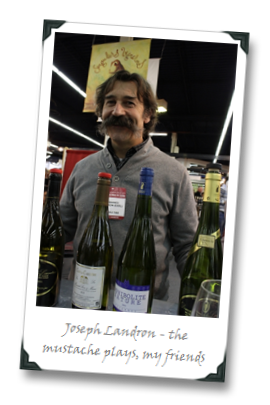 According to Domaine De La Louvetrie’s Joseph Landron (whose booth I visited at the Salon a couple of weeks ago), that perception has a lot more to do with tradition and lack of focus than it does with potential.

Landron is in favor of a small but growing movement within Muscadet to establish more Cru designations in the region. According to him, when it comes to proper vineyard care, Muscadet is having a “teenage crisis – people are looking for something and are just… confused.” Cru designations, he argues, would supply some much-needed regulation – and a sense of direction & purpose – to the region.

“I’m in favor a new consciousness in the vineyard,” he told me. This doesn’t mean that he thinks Muscadet should be messed with too much (“if you have very nice juice, you do nothing!”), but that the region will never show its true potential without more stringent regulation.

It was hard to argue with his wines (and even more difficult to argue with the near-hypnotic powers of his incredible mustache – see inset pic), which showed good aging potential, courtesy of immense natural acidity, at prices that should shame most U.S.-based white wine producers. As if to at least partially prove his point, we tasted back nearly ten years to a 2003 Domaine De La Louvetrie “Le Feif du Breil” Muscadet De Sevre-et-Maine Sur Lie – it was strong for a Muscadet, powerfully rich and even a touch creamy with notes of nuts and honey, brine, and flint. This was not something to use just to wash down a plate of fresh oysters – it was something to marvel at slightly and then use to wash down a plate of fresh oysters.

Two standouts from our stand-up tasting, both of which should only ever be attempted in the presence of food unless you plan on punishing your teeth enamel:

Part of a (successful) attempt to create a low-alcohol (11% abv), more drinkable style that still maintains some seriousness, this is a lilting, pithy wine with a slight streak of severity. “The balance between lower alcohol and complexity was better at this site” Joseph told me; I think that’s what he said, anyway, as I was too busy being mesmerized by that mustache. Anyway, lemon peel dominates, but this inexpensive wine is crazy amounts of drinkable.

“Flabbergasted” would be the best way to describe my reaction to this complex beauty after I heard the U.S. retail price. This wine is stunning, with tropical, creamy notes, a touch of hazelnut, citrus peel, grapefruit and even some flowers. It’s tight, well-put-together, and will probably still taste great six years from now.

If for some reason going back to 2003 on a Muscadet doesn’t impress your geeky side, let’s turn the clock back to a time when RUSH were still wearing their silk kimonos and singing about dystopian future galactic battles based on Ayn Rand novels and the Stones were experimenting with disco (we call this the seventies)…

Pierre-Marie Luneau, the young, 8th generation vigneron of Muscadet producer Luneau-Papin, lacks impressive facial hair but more than makes up for it in amicable enthusiasm. During a sit-down tasting at their Salon booth in Angers, we tasted through decades of his family’s production, some of the few in Muscadet known for being deliberately held back and aged before release, and for being able to age for the long haul.

It’s mostly the fruit from small parcels of granite and schist soils whose juice gets the aging treatment, and the resulting wines end to focus on texture rather than fruitiness, such as their Excelsior line which are vinified and bottled from separate plots after varying periods of lees aging. All of which is just a long way of telling you that they like making the wine geek’s Muscadet.

After going through some of Luneau-Papin’s current releases, we started working our way backwards in time… 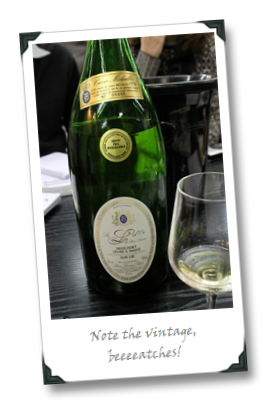 The 2004 Excelsior Muscadet was practically exploding with spices, and sported a lovely, lemony texture topped off with tropical fruits; it still tasted quite young….

…a 1995 Le “L” d’Or Muscadet was showing off Alsatian-Riesling-style petrol and floral notes, tropical and stone fruits, even a hint of ginger; it was light, salty, austere and elegant… and far from feeling old or wimpy…

…until finally we popped open a magnum of 1976 Le “L” d’Or Muscadet (bottled in the mid-eighties). Toasted nuts, petrol, vinyl, citrus pith, surprisingly little color darkening (we are talking about Muscadet, here)… it was texturally stunning, and quite difficult to describe in words; a bit like meeting a well-dressed, 80-year-old Kung Fu master that is still quite spritely when he needs to be and more than capable of kicking the living crap out of you.

Yes, peoples, Muscadet can definitely age. Big time. Whether or not you’re geeky enough to handle it is the real question.

In case you’re feeling up to the challenge, here are some more recent Luneau-Papin vintages for you to try out (and maybe even sit on for a decade… or three…):

From 100% Melon de Bourgogne Vines planted in 1974, the wines spent ten months on the lees and is all the better for it. There’s fantastic minerality in this sucker, and great structure of pithy citrus despite its more delicate qualities of fruit.  Pierre-Marie calls it “a dream realized from a beautiful, special place” previously owned by a family friend who “was a very good vine grower but not a good winemaker; he didn’t exploit the potential of the plot.” Personally, I call it a bargain considering the amount of complexity and food-friendliness for the price.

This, to me, was the most accessible L-P wine I tasted that still possessed some of the complexity of its sibling bottlings. There’s an almost sweet lemon drop note to this wine, and it’s well-balanced and drinking beautifully right now.

From the Goulaine area, which is in the process of being recognized as a Muscadet Cru site, primarily on schist soils. But who cares, really? It’s stunning and a crazy, crazy bargain and that’s probably all most people need to know. It’s also creamy, almost tropical, and would fool you into thinking it was a very good steely Chablis in a blind tasting. There’s saline, minerals, and fewer flowers than seriousness… it felt like being on the shore of the sea, preparing to embark on a sailing vessel en route to an epic land battle on foreign soils. 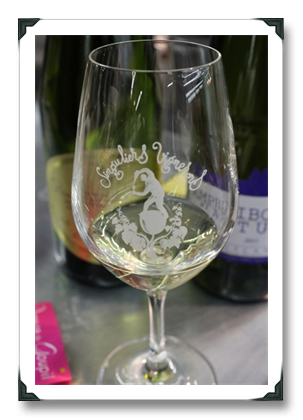 16 thoughts on “Minerals And Mustachios (Can Muscadet Be Aged For The Long Haul)?”