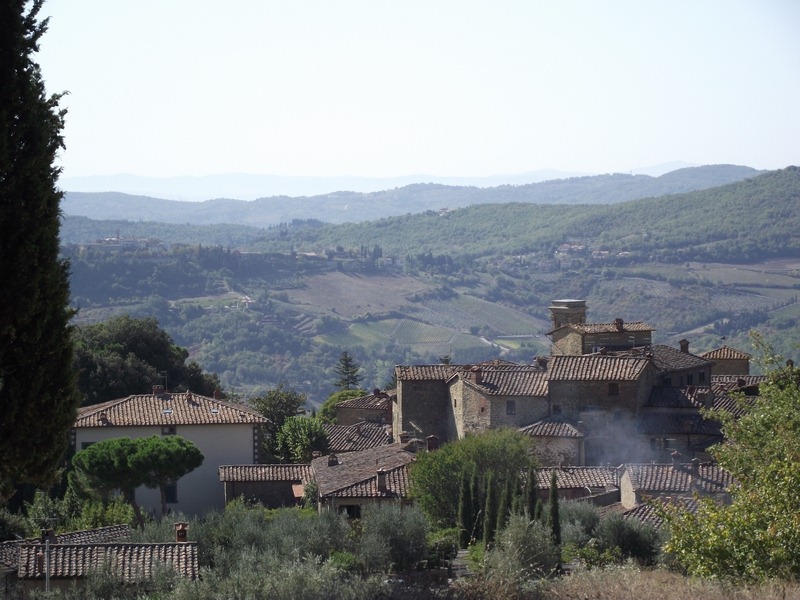 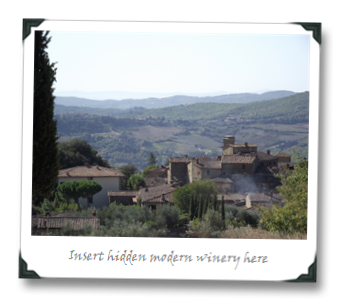 When you’re dealing with the wine biz on a consistent basis, there’s one thing you get to see a whole lot of (besides wine, Styrofoam, and cardboard, I mean): 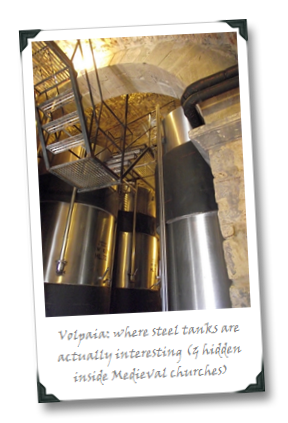 The trouble with all this steel tank love is that there are only really two kinds of people that actually give a rat’s ass at all about steel tanks:

I’ve yet to meet anyone (anyone!) else in the Universe that cares about steel tanks – including me, and (very, very likely) including you who are reading me talking about the wine biz’s hard-on for steel tanks.

So when you find yourself in a situation where steel tanks are actually, truly, 100%-certified cool – like when they’re hidden in the bowels of churches from the Middle Ages in Chianti’s Volpaia, for example – well, let’s just say you get real interested, real fast. Which is exactly what happened to me a couple of weeks ago as I whiled away my time under the Tuscan sun in the heart of Italy’s ancient, beautiful and storied Chianti Classico region… 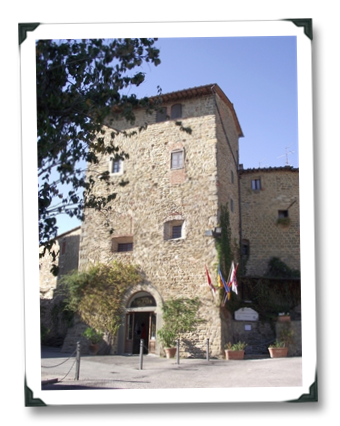 Within the picturesque Inside an 11thCentury fortified hilltop village of Volpaia – whose closest neighbor is a charming little spot called Radda that boasts an impressive view of the countryside, a café, and a couple of tiny grocery stores (and, like every other small Italian town, about 400 churches) – lurks the workings of a modern winery.

You wouldn’t know it from strolling the town’s narrow streets, though.

Volpaia, owned almost entirely by one family, is an historic landmark, and as such the winery inside of it – Castello di Volpaia – isn’t allowed to modify the walls or exterior of the town’s ancient buildings (only the roofs can be altered). Which means that its steel tanks sit inside the remains of de-sanctified Medieval churches, and making wine therein involves transporting juice between buildings via a hidden piping system to get it from press to tanks to barrel to bottle. On the outside, it appears as though little has changed in Volpaia since the Renaissance, when scientific instruments were made there by Lorenzo della Volpaia (a buddy-bud of another famous Italian inventor, Leonardo da Vinci).  But inside, those steel tanks are holding some tasty vino as they butt their metal heads against archways that long ago cast shadows on the town’s worshippers.

All in all, it’s a situation that presents some charming, if odd, juxtapositions: in the town’s only remaining sanctified church, for instance, an ancient crypt is now the resting place of Castello di Volpaia’s Super Tuscan blends as they age in 1-3 year old French oak (which had me wondering if the priests ever enjoy a special “upgrade” to their altar wine…); in one of the de-sanctified churches, a former holy water font is now a functioning utility sink (which struck me as simultaneously strange and yet somehow oddly appropriate).  A small amount of (very good) olive oil is also made on the property, which hosts a few guest apartments, an office, living quarters for the company’s workers, three small restaurants, and a wine shop.  No torture chambers, though (at least, not that are shown on the tour I signed up for).

While I found Volpaia’s crypt-aged Super Tuscan blends good-but-not-great, I was loving me some of Castello di Volpaia’s Chianti Classico; particularly the Riserva bottling, which delivers a very big bang for the buck (or Euro): 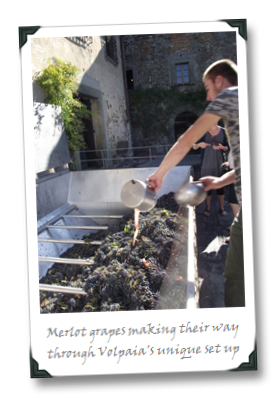 Old (vibrant acidity) and New (vibrant fruit) Worlds collide and, like the marriage of ancient and modern in Volpaia’s winery itself, ultimately find some finely-hewn balance in this tangy, black-fruited beauty of a wine.  The dried herbs and cherries that you’d expect from a really good Chianti are in abundance, along with hints of orange peel (work with me here, people, you know what it smells like!), but the star of the vinous show is the balance and interplay between the dark, structured fruit and the food-friendly, lip-smacking acidity.  It’s in that balancing act that this Riserva really shines – ultimately so brightly that it casts shadows over its more expensive Super-Tuscan cousin, Volpaia’s single-vineyard Balifico blend.  It’s a balance that makes the wine simultaneously possess a sense of weight and a sultry, sexy, svelte side that makes it a pleasure to pair with wild boar prosciutto or just drink on its own (preferably with someone equally as sexy, svelte, and versatile).