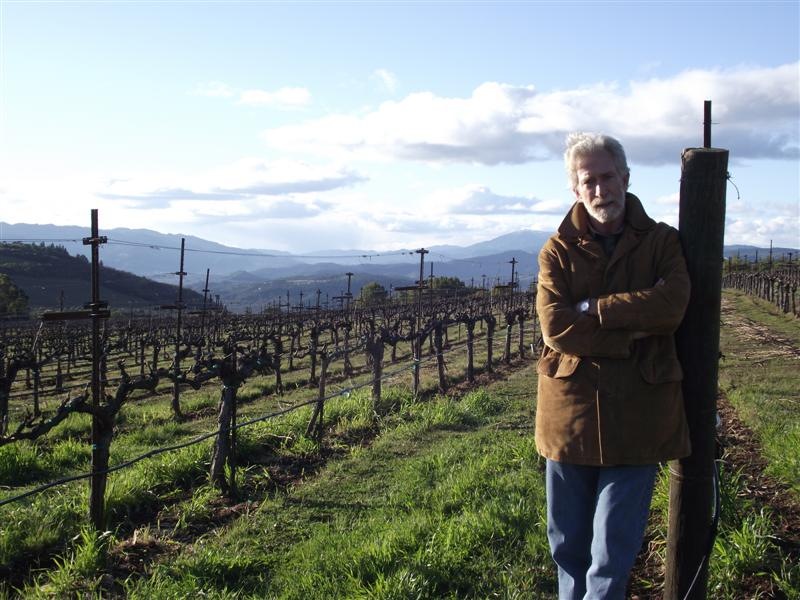 Saying that historical framing is important to Tim Mondavi is sort of like saying that Chernobyl was a bit of a boo-boo. Everything has historical framing for Tim Mondavi.  Our pre-lunch discussion began with a series of Mondavi family photos (some famous, some not-so-famous).  Ask him about where Continuum fits in, well, the continuum of Napa red wine production, and you get an answer that, while charming, strains the memory by starting in the 1850s and rambling from the planting of grapes in Northern California for sacramental wine through to the personal history of the Mondavi family, with a dozen tangents in between.  Clearly the name of Tim’s latest project is no accident.

While a discussion with Tim can tend to saunter (I submit as evidence this recent fascinating but winding performance on Wine Library TV), Continuum’s wines (expensive, high-end, Cabernet-based Bordeaux-style blends) are nothing if not supremely focused.  The 2007 balances intense, rip figs with graphite aromas that could have come straight from Bordeaux, and it really got Continuum on my personal wine radar. The 2008 changes up the pitch, slightly but importantly: it dials in more fruit from the Pritchard Hill estate than any of its predecessors (which relied on higher percentages of fruit from To Kalon on the Valley floor). The result is a wine with deep, black fruits, tobacco and spice aromas that has a structure reminiscent of an Eiffel bridge: austere, imposing, but beautiful in its artistry. It’s built for long aging, and it’s focused like a laser on getting there.  Interestingly, it’s the variety with smallest component in Continuum – Merlot – that seemed to have Tim the most excited. “We have the elevation here to get very low yields from Merlot, and great nuance.”  Their 2011 Premiere Napa Valley auction lot – a barrel sample of a 2009 blend of Cbernet Sauvignon, Cabernet franc, and Petit Verdot – provided a glimpse into Continuum’s future: it contained a higher proportion of their hillside fruit (eighty-plus percent), is vibrant but has similar depth to the 2008 bottling and complex, kick-ass, long-haul aging structure. See, I couldn’t even get away from an historical context, and we’re only talking about three vintages here!

Lesson two: terroir is not a kind of dog; also, site might not be everything, but it’s probably close to being everything. If the wine is all Bordeaux in presentation, the model for Continuum, at least in spirit and intent, is Burgundy – namely, the focus on starting with a great patch of vineyard land and pretty much getting as far out of its way as possible en route to a finished product.  It’s an outlook that predominates in the greatest of that region’s wine producers. Many moons ago, Robert Mondavi took a young Tim and his siblings on a tour throughout Europe’s greatest wine regions.   “I was traveling with my father in Burgundy, using my poor high school French to translate his questions to the winemakers that we visited,” Tim recounted over lunch.  “Whenever my father asked a winemaker ‘But what did you do to make this wine so great?’ the answer was always the same.”  Here Tim mimicked a French accent that gave his Godfather voice a run for its money:

“’Nudzzing! It iz ahll zee terroir!’ We didn’t know what they were talking about – we thought at first that terroir might be their dog.”

As it turns out, “Nudzzing! It iz ahll zee terroir!” was also the same answer that Burgundian winemakers gave them when the wine was terrible.  Hence the focus on vineyard site as the ultimate source for wine quality.

Not surprisingly, Tim has an historical context for the choice of the Pritchard Hill site.  “Dalla Valle is right here, their wine is fantastic; they were the model in terms of what we wanted to do, to make world-class wines.  You can take a map and draw a straight line from the Robert Mondavi Winery tower, directly over Opus One, through Dalla Valle and right to this spot.”

It’s a spot that wouldn’t be any easier to farm if you managed to truck in Fred Flintstone and his Brontosaurus from the quarry to help: underneath the shallow, red volcanic soils on those hillsides is a thick, unyielding layer of bedrock – good for vines, bad for avoiding back-braking planting work.  “We couldn’t have made wine sustainably here not too long ago; not until Napa wine and the industry evolved to the point where fine wine, world-class wine, could be sold from a site this difficult to farm.”  In other words, not until prices could support it, and the delicate balance of low yields, high quality and high selling prices (the 2008 release will fetch around $150 per bottle) could justify production costs.  The idea is to get Continuum up to “about five thousand cases a year – that would be sustainable for us.”

‘Sustainable’ in this case, refers primarily to fiscal and not environmental matters. I got the sense that selling Robert Mondavi Winery in 2004, and then moving on after a well-chronicled schism with RMW’s new owners (Constellation Brands) – itself, in part, fueled by using the Mondavi name on mass-market, low-end wines – still stings for Tim.  Being sustainable means being independent; it means being free.  “Business isn’t the only thing, but the art has to be sustainable” he said.  “We lost Robert Mondavi Winery because we lost a concentration of focus, which became diluted.”

Lesson three: in which class is dismissed and fate brings everything together; you know, if you believe in that sort of thing.

It was after negotiating a small, wet corner of earth behind the estate’s offices, looking at a cutaway of the vineyard that revealed all of that imposing bedrock, that I asked Tim an obvious but imposing question: “Do you believe in fate”?”

Personally, I don’t; I’ve found that our lives are governed by forces far more random than we realize, and that our brains like to go back, fill in the gaps, and then playback hindsight to us in a way that makes any given series of events seem balladromic and interconnected. It’s easy to let our brains do that work, magically assembling a continuum from a trail of random events; it’s much, much harder to accept chaos and randomness as the real hands of god, the laws by which the Universe is actually governed.  Harder still to do that in the face of events that, even to someone like me, feel connected and almost divinely inspired; after all, Hollywood probably couldn’t have drawn up a better series of connections than those that led to Continuum.

It was, in other words, a totally loaded question.  Does Tim Mondavi believe in fate?

“Well… I… yeah, I suppose,” Tim answered with a smile. I couldn’t see the eyes behind his sunglasses, but I suspect there was some shining going on. “I think things… do happen…”

I felt inclined to forgive the suggestion that legacy and fate are the parents of Continuum, that they somehow came together in a perfectly choreographed dance to the music of the spheres and dictated exactly when, where, and how Continuum would be launched.  Eyes, voice and body language all converge on a combination of pride and self-reflection (with a dash of ‘wow-we-really-did-get-here-after-all-didn’t-we?’) when Tim talks about what even I would describe as eerie coincidences between his father’s launch of Robert Mondavi Winery and the genesis of Continuum.  “My father was given his ‘leave of absence,” he said, “in his early fifties and started Robert Mondavi Winery.  At nearly the same age,” his voice rose a bit here, and eyes really got shining, “I was given a ‘leave of absence…’”

As for legacy, I think it’s a bit too early to tell – let’s see how those bottles of Continuum taste in another ten or fifteen years, then we can talk about continued legacy. One thing’s for sure: history has set the bar very, very high for Continuum – and the wine is off to as good a start as even fate herself could have planned it.

Ripe, dark and with a spice profile more complex than a Lewis Carroll logic puzzle. But the real pleasure is in how well the tannin, fruit, and acid “scaffolding” is put together – firm, gripping and artistic; it’s like taking in the view of an Eiffel bridge, and it will carry the wine for many years of aging (if you can wait).

10 thoughts on “Lessons In Longevity: Tim Mondavi’s Continuum, And The Coming Of Age Of World-Class Napa Reds9 min read”