Drinking Montefalco Sagrantino is kind of like having kinky sex.

I mean, there’s the juicy anticipation phase when you smell all of that ripe red fruit and spice on the nose; then there’s the sexy, feel-good phase when the wine enters your palate like silk; and then… WHACK! The tannins smack/bite/spank you.

This is not to say that you should assume that abyone drinking Montefalco Sagrantino is into kinky sex, it’s just to give you degenerately progressive and tolerant 1WD readers a frame of reference, and show you where my own head was during my recent media visit to the region.

During that trip, I decided to have a visit to the relatively small (eight hectares, about 45,000 bottles/year) and decidedly non-kinky (family-run) producer Romanelli, who’s vineyards sit in the northeastern corner of the region, and who I strongly suspect will not exactly be totally thrilled that I opened their feature here with a reference to kinky sex. Anyway… with the high winds there, it’s a great spot for passito style dessert wines (FTR, theirs is spicy, racy, and pure, and well-worth seeking out), but also (as is common in Montefalco) for several types of farming.

Devis Romanelli, who took over the winemaking reins in 2007, has been making a push to certify Romanelli’s olive oil and vines as organic, which isn’t easy in the sunny-but-continental Montefalco climate. “2013 was very… educative for me for organic viticulture” he quipped.

Devis’ grandfather purchased the farm in the late 1970s, during which it was also producing wheat, olives, and supporting cattle; grapes were sold to the once-ubiquitous Montefalco co-ops. Their Sagrantino comes mostly from their San Clemente vines, which grow on a limestone/clay mixture. It’s these that are in the 1WD review focus today, as Devis walked me through a tasting of their Sagrantinos going back to his first vintage… so buckle up, and get your safe words ready… 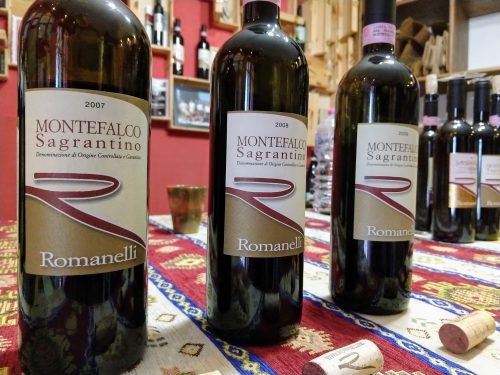 This is a wine of someone finding his footing. You’d expect the burly Sagrantino tannins to have started to soften at this point, and you’d be right, but they (and Sagrantino’s textbook powerful heat and palate weight) are still there. The tone is one of wines that are not made for early imbibing. Stewed plums (red/blue/black), spices, mint, smoke, cigar, cedar, and leather… there’s still a lot going on here, though it will always require some form of steak to tame it, I suspect.

Things really start to get interesting here; the nose is similar to the `07, but it’s fresher, riper, darker, and with more elegant spices and a sexier presentation overall. This one has the fruit to age along with the tannic structure, and it will be very delicious very soon (“soon” in Sagrantino extended aging terms, anyway).

Devis remarked that “2009 was the vintage where I found my way,” and I don’t think there’s anything here to undermine that statement. It’s a bit of a head-fake of a red; it starts out herbal and tight on the nose, but the palate has a generous, round structure and tough, astringent (i.e., young) tannins. It’s a compelling, tense combination that makes for fascinating sipping, and the greener herbs on the finish add depth and complexity. No safe word required.

This is as tight as a tourniquet right now. Having said that, what starts to peek through is downright superb: dried herbs, tobacco, black licorice, leather, mineral, smoke, and layers of red and black cherries. The palate gives the sense that this is a leaner Sagrantino, but that shouldn’t deter anyone from what (I think) is going to be a stellar red after several more years of repose.

Earthy, leathery, dark of fruit, gritty, mineral, and loaded with sweet tobacco spices, this is sexy, structured, and long. It’s powerful, too, which is going to be bad news for the epic hangover you will experience after opening it many years from now, as it will almost certainly be too delicious by then for you to successfully exercise any restraint in the amount of it you will drink.

2 thoughts on “Kinky Sex Drinking, And “Educative” Viticulture (Back Through Time With Romanelli Montefalco Sagrantino)”