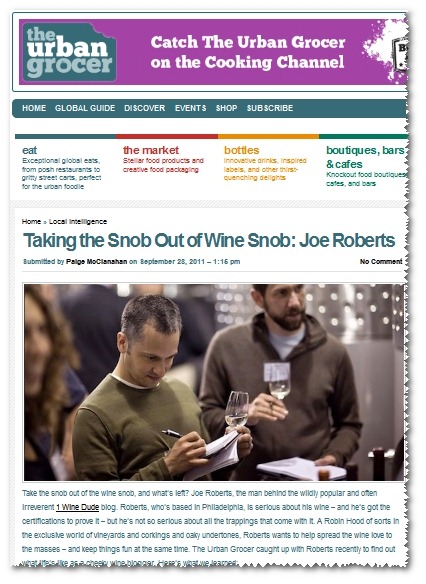 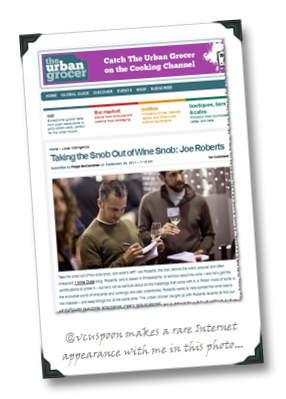 Just in case you’re not sick of me yet (you are reading this, right Mom?), 1WD has cropped up in the Global Interwebs in two interesting extra-curriculars in the past few weeks.

The first is in in the form of an interview I did for The Urban Grocer (don’t ask me, I’m not sure why these people wanted to interview me, either), in which they called me a “Robin Hood of sorts in the exclusive world of vineyards and corkings and oaky undertones” – presumably a reference to my penchant for wearing green tights, which otherwise I was under the impression that no one knew about.  More interestingly, I think, is that TUG is now a series on the Cooking Channel, so I’ll be able to say “ah, I knew her way back when!” after Caitlin Zaino is totally famous.

BUT… even more interesting (to me, at least) is the other recent 1WD mention, Tipping Point Labs co-founder Drew Davis’ thoughtful treatise on short-form wine reviews; there’s some seriously tasty meat on the bone at which to pick in that one…

After reading one of my mini-reviews on twitter, Drew waxed a bit philosophic on the potential impact of short-form, social-media-delivered product reviews:

“In the consumer packaged goods industry and specifically the consumables market the life cycle of a consumer’s enthusiasm for your product or brand is extremely short. You make the purchase, consume the product and move on. In a world where everyone has an audience you need to start thinking about how you can encourage reviews as close to the moment of consumption as possible.”

It all sounds like great fodder for discussion, and I appreciate where Drew is coming from, because I believe in the power of social media to deliver messages about brands and extend those mini-conversations – and the mini-reviews have, for sure, stirred real-time conversations about those wines in twitter and facebook; in fact, sometimes I can’t keep up with them and/or miss those conversations entirely because I’m off doing other things when they take place on twitter and fb.

But I can also tell you that I started the mini-reviews on a lark, didn’t have anything like Drew’s points in mind when I started writing them, and over the last few years have watched with bemusement the discussions, reactions, and relative popularity of them in the on-line wine world.  They are a labor of love – a crazy one, but it’s still crazy love! – and they are much, much, much harder to write than most might realize without actually attempting to do them.

Which brings me to a question that a few people posed to me last week: “Hey, so-and-so is also doing twitter wine reviews now, are you cool with that?” The short answer to which is “I don’t really have a choice, do I? I mean, it’s not like writing stuff on twitter can be copyrighted.”  But the truth is that I’m thrilled that other people are doing that if, in fact, I inspired them to do it – which I’ll note is rather questionable since I’m not the first person to pen 140-character twitter wine reviews (I might be the first to have done them consistently and seriously, but those are also debatable). But I think there is strong evidence that micro-context conversations on platforms like twitter help extend brand recognition and enthusiasm, and those mini-reviews are part of that.

Which brings me to another – important! – point about those mini-reviews: I have some big changes in the works for them.

I can’t give the details just yet, because we’re still inking contracts… but very soon I’ll be announcing a collaboration that will help extend those micro-context conversations around the mini-reviews, make them easier to access on-the-go, and increase their usefulness for the average Joe and Josie looking to actually buy a bottle or glass of one of those wines after reading and/or commenting on the review.

I’m really, really excited about it, and seeing other bloggers adopting the format to me is another signal that the time has come to up the ante a bit on the minis.  Much, much more to come soon!

6 thoughts on “Interviews, Mini-Reviews, And Prepping For Big News”