Last week I was interviewed by the IntoWine.com folks (these are the same folks who engendered a great deal of controversy in the wine world when they released their first annual list of  the “Top 100 Most Influential People in the U.S. Wine Industry“). 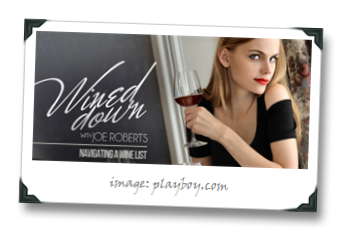 IntoWine.com was (overly) kind in their introduction of me at the start of the piece (thanks, guys!), but otherwise you might find it readable so I’m mentioning it here. I’m not sure why I was so frank and edgy in my responses, maybe the Playboy.com gig is rubbing off (ha! sorry, couldn’t resist that) on me.

Speaking of the Playboy.com gig, my latest article in the Wined Down series posted last week, an interview with Master Sommelier Fred Dexheimer on how to successfully navigate a restaurant wine list (for more on Fred, check out the video interview I did with him a few weeks ago).

I mention the latest PB column not only because it gives you an excuse to go look at pictures of beautiful, scantily-clad women for a few minutes, but also because I happened to pen it and PB happened to launch it the same day that a minor sh*t storm broke out on Tyler Colman’s excellent DrVino.com, around the comments made about modern wine lists by NY Post restaurant critic Steve Cuozzo. If you think my take on retailers, distributors and importers was harsh in the IntoWine.com interview, wait until you see Cuozzo’s remarks in the comments of Tyler’s post…

Those comments include a stab at the state of wine writing today: “writing on the subject is dominated by wine wonks who are out of touch with the real world of dining and drinking. They are out to show off their knowledge of what in the cabaret world is called the obscure repertory, which fascinates a tiny academic elite but puts paying audiences to sleep.” I think some of that rings true, actually.

They also include a stab at sommeliers: “As often as not, the sommelier (or whoever’s supposed to know the list) isn’t even in the house — he or she is off junketing, doing TV or otherwise MIA. Usually in such cases, whoever’s on the floor doesn’t have a clue. Take if from a critic who’s witnessed the drill for 12 years.” That’s a comment with which I patently disagree (I’d submit last week’s PB column with Fred as Exhibit A); I’ve yet to encounter a somm who was that out of touch, at least not at any half-decent restaurant at which I’ve dined anytime in the last… well, several years. Have you?

My favorite comment gem from Cuozzo’s remarks might be this one: “I LOL over those who mocked my notion of Bordeaux with chicken. They proved that ignorant snobbism based on an antiquated catechism of what’s permissible endures.”

I’d tell you whether or not I agree with that, but first I have to figure out what it actually means…