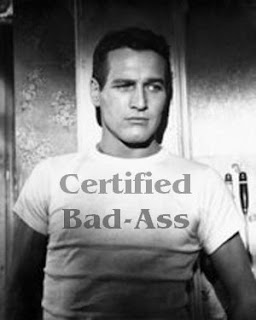 Actually, it’s more a celebration of all things Bad-Ass.

That’s because we just lost one of the most bad-ass individuals who has ever walked the face of the earth – Paul Newman.

Of Newman’s bad-ass status, there can be no doubt. Google “Baddass actors Paul Newman” and you will get about 11,000 hits. In his heyday, Newman was the Brad Pitt of his time, only without the annoyingly smug and self-possessed attitude, and with millions of dollars of world-enhancing charity goodness thrown in to seal the deal.

If Chuck Norris is bad-ass (and he is), there is no question that he is second generation bad-ass, having learned his key bad-assness traits from the master, Newman.

Newman was so bad-ass that he was able to make dog treats for very small yappy dogs, salad dressing, and even wine (ah-ha! finally, a tie-in!), and still remain a total bad-ass… 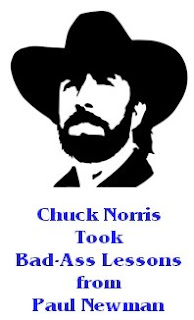 How is the wine? I’ve never tried it myself, as it’s available only in restaurants I think, but the reviews suggest that his Chardonnay is a winner, and it pairs best with movie popcorn, which of course you need to have on hand when watching one of Newman’s bad-ass films (like Slapshot).

Nothing against Chardonnay, but let’s face it – outside of Burgundy it’s taken a hit in terms of bad-ass status because of the super-buttery treatment it received for the last few years by New World winemakers.

If your best wine is a white (not the typical pick of the bad-ass male), and it’s a Chardonnay, and you’re still a bad-ass, then you are a bad-ass indeed!

So this week, crack open a bottle of something bad-ass, fix yourself some popcorn, pop in one of Newman’s bad-ass flicks, and take a moment to celebrate the life of a true bad-ass: star, entertainer, family man, and philanthropist.