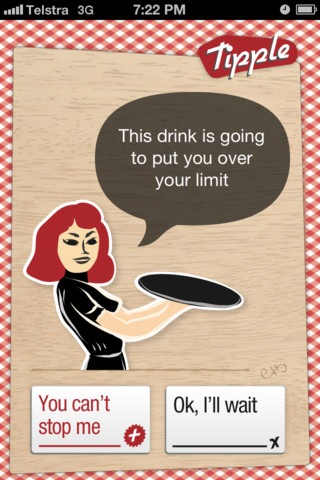 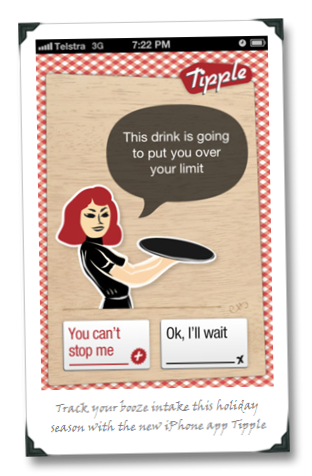 Now that you’ve started planning the vino you’ll be popping open for the holidays, the last thing you want to do is go and spoil all the fun by drinking too much and making a fool out of yourself at your next social gathering (for example, getting drunk enough that you think using the neighbor’s cat as a shot-put sounds like a good idea, or – heaven forbid – becoming the ultimate douchebag and getting behind the wheel when you’ve had a few too many glasses of Port… or too many glasses of anything, for that matter).

Tracking your vino consumption and keeping tabs on when you’re getting too-close-to-socially-embarrassing-moments-for-comfort? Yeah, there’s an app for that.

It’s called Tipple and it’s the brain-child of my friend, developer Sugendran Ganess (who’s also a talented photographer – some of his pics have been featured on these very virtual pages). And we’re giving away a coupon code for a free copy of Tipple to three lucky winners (a $0.99 value – for the app, I mean, not for you winners – you’re priceless, okay?)!

I’ve taken Tipple for a test-spin (because I’ve finally been sucked into the iPhone whirlpool), and it’s intuitive and fun to use – and it makes estimating your alcohol intake during an evening a virtual breeze: you tell it what you’re drinking, and it calculates your booze intake compared to recommended limits. It can then warn you when you’re about to go over some of those limits (and into lampshade-wearing territory, which someone surely will capture on video and post to youtube before you even have a chance to go to the bathroom).

Please notice that I did NOT say this app will tell you when you’ve had so much to drink that it’s unsafe to drive – how about this one, lampshade man: if you’re drinking, give the keys to someone else. But it is a fun way to see what your booze intake really is during the holidays for those times when you’re not driving, and maybe in some small way to experience the true despair intended by Welsh poet Dylan Thomas when he said “An alcoholic is someone you don’t like who drinks as much as you do.”  In other words, this is an app for entertainment purposes only.

Leave a comment on this post describing one of the more embarrassing drunken moments you’ve witnessed (this could be your own drunken moment, or one you happened to see a friend or stranger perform – keep it PG, people; I ask only that you stop shy of incriminating yourself or anyone else legally, so when in doubt leave the names of those involved OUT!).

In one week, I will randomly select three winners from the commenters who will each receive via email one coupon code redeemable for a free copy of Tipple (here are instructions on how to redeem if you win). Please note that you’re getting a coupon code for the app, should you wine – you’re not getting an iPhone (you greedy S.O.B.), and you need to be over 21 to win (you are reading a wine blog here, after all). Also – pay attention! – you will only have about one week after winning to redeem before the coupon code goes **poof** into the ether, never to be redeemed again.

Got it?  Good.  Now, to kick things off, here’s my embarrassing drunken moment:

It happened in undergrad (why do I have a feeling those four words could be used to start most of the stories that would qualify under most-embarrassing drunken moment?) and I was sitting in on bass for the Pep Band during the kick-off of March Madness for our basketball team at St. Joe’s. Local news/TV personality Ukee Washington was on hand to play a friendly celebrity basketball match. Poor Ukee was relaxing in a court-side seat after his match while the St. Joe’s players took to the court, and he didn’t know that the Pep Band bassist had been drinking copious amounts of whiskey off-premises that night before the rally took place.

I say “poor Ukee” because in a fit of drunken enthusiasm I decided to run over and introduce myself to him, and he politely turned in his chair with a smile on his face, which quickly turned into a sort of puzzled and slightly-frightened semi-grimace as I began speaking to him in my own brand-new, drunken marbled-mouth language that only I would have been able to translate correctly (not that it would have made much sense if a translation was available). This amused a not-insubstantial number of the not-so-small attending crowd. The (blessedly) short-lived episode ended in me being unceremoniously and only semi-politely whisked away by a couple astute members of the St. Joe’s staff and Pep band before I could cause Ukee or myself too much further embarrassment, though I’m pretty sure the only way that could have happened is if the whole thing had ended up on the evening news with a close-up of my drunk-ass face.

Ukee – if you’re reading this, I am really, really sorry!

Now, let’s hear your story – if you’re brave enough to share it! :)