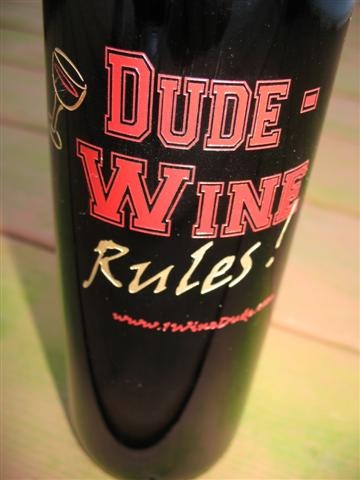 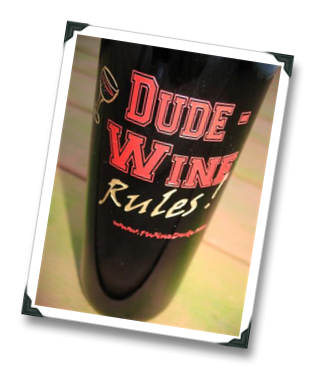 UPDATE: Etching Expressions contacted me in the Summer of 2012 to indicate that they offer a lot more wine choices now than what was chosen to fill the sample bottle sent to me when I penned this review back in 2009. From the looks of those choices (and the pretty reasonable prices at which some are offered), it’s probably worth taking a second gander at the options.

A little while ago (ok, well, probably longer than that… I’ve been busy…) I took part in a promotion to sample a bottle from a company called Etching Expressions.

Etching Expressions offers an interesting gift idea: customized bottles of wine (prices starting around $65), where your customization is actually etched into the wine bottle glass itself, making for a possible conversation-starting keepsake after the vino inside is long gone.

Etching Expressions sent me a bottle of what I think is their house Cabernet, inside of a very cool bottle that sported an etched version of my “Wine Rules” T-shirt logo.  In terms of the bottle, I was mightily impressed – the etching job is top-notch (not that I’m a glassworks expert, but it wasn’t flawed in any noticeable way), and it looked very, very cool.  There’s no question that this sort of gift is going to get tongues flapping at a dinner party.

As for the wine itself… here’s how my sample was described on the Etching Expressions website:

California Blended Cabernet Sauvignon: A little tannin in the nose, along with plum and berry. A dash of vanilla? The taste is light for a Cab, but has a nice balance between fruit and tannin.

The wine wasn’t flawed in any noticeable way, unless you’d categorize being unbelievably bad to the point of undrinkable to be a flaw.  For me, there was no question that this sort of wine is going to get tongues flapping at a dinner party – as in gagging-flapping.

This was one of those rare moments when I actually hesitated after smelling the wine, uncertain as to whether or not I should even let it hit my palate. In terms of what I can tell you about the wine without using expletives, “thin & acerbic” comes to mind.  So unless you want to seriously piss off your friends, family, boss, etc., you’d do well to pick one of the brand name selections and avoid the house wine options if you’re considering going with an etched bottle of wine as a gift option.