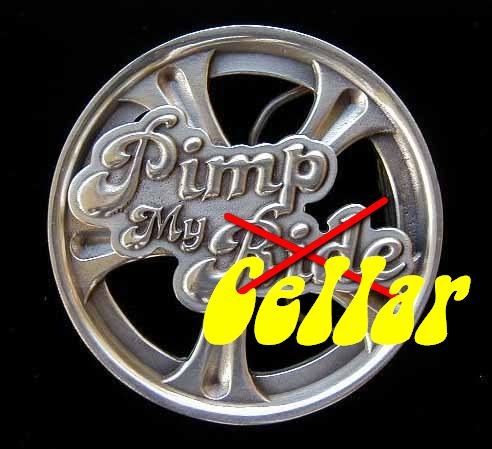 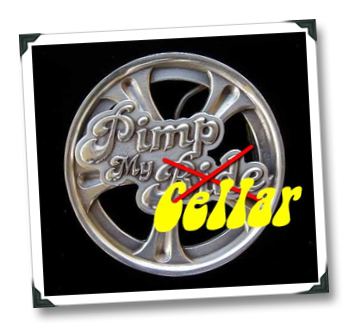 Does that girl in Accounting think I’m cute?

Either that, or you’re thinking that we’re into Week #3 of intense Giveaway action here on 1WineDude.com!!!

Two weeks ago, five lucky winners walked away with copies of the latest way-cool Putumayo world music CD release Italia (a collection of songs recorded by contemporary Italian singer-songwriters).  Last week, one lucky person cashed in on five killer jazz CDs from Sony Music and a gift certificate from www.americanwinery.com.

This week, we’re giving one lucky winner a combo-pack of 1WineDude gear: a Socrates Wine coffee mug, a “Wine Rules!”  T-shirt, and a copy of the 1WineDude Tasting Guide eBook!

The rules are simple: you leave a comment on this here post, and I will randomly draw a winner from the comment pool.  It’s easy… and the winner could be YOU!

For this give-away, I’m looking for your help – I need you to PIMP MY CELLAR!…

I often get asked what my wine cellar looks like, or how I store my wine, or generally what kind of wine racks I use, etc.  The answer is really, really boring – I have potentially the world’s lamest wine cellar.  Almost no money has been spent on wine storage in my home – that money instead goes towards wine buying.  I’d rather be able to afford kick-ass wine than store crappy wine in an expensive cellar. 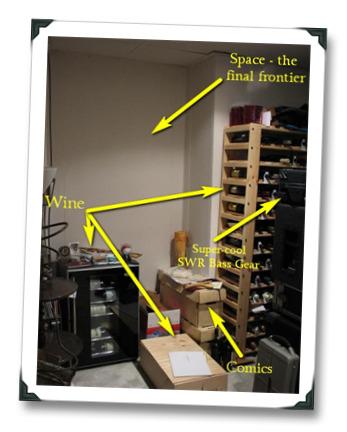 Like many other people on the Right Coast, I’m lucky enough to have a basement, part of which we’ve left unfinished, an area that servers triple-duty as a) storage, b) exercise facility and c) wine cellar.  The temperature in that area rises and falls very gradually, and it’s cooler than the outside temperature in the Summer, and warmer in the Winter.  The temperature varies between 55F and 70F during that time, but never moves more than a few small degrees on any given day.  It’s usually dark and largely vibration-free.  It’s about as decent an area for storing wine as you’re likely to get without having to pay for it.

As you will see from the inset pic, my storage mainly consists of boxes, a small wine refrigerator, and a cheap wine rack that, now that I look at it, appears to be leaning precariously to the right…  It shares space with my super-cool bass amp and speaker cabinets, and my dusty & aging comic book collection.  Anything that doesn’t fit into the rack is sitting in shipping boxes (not pictured).  It’s kind of sad, really.

The good news is that I want to upgrade the Chateau Dude wine storage, and make better use of the space pictured to the left. This is where YOU come in!

You will notice that there is a pretty sizeable area that isn’t being used.  In terms of placement, this space is near one corner of the basement (which means it benefits from better temperature regulation since two sides are surrounded by earth), and is recessed into the basement wall.  It measures approximately 48” across, 20” deep, and 89” floor-to-ceiling.  And I want to fill it with some vino!

I need YOU to leave a comment and suggest how I can best use that space, and you might wine some 1WineDude gear!

The wine fridge, comics, etc. are gonna get moved as part of a pending Chateau Dude basement cleanup, so don’t worry about those getting in the way of your creative process.  Personally, I’m kind of partial to cube/bin-style racks for this space – the ones where the bottles actually touch each other and aren’t separated by slats – because this increases the storage capacity as well as the thermal mass, which means better use of space while helping the bottles maintain more stable storage temperatures.

But… I’m open to suggestions, and given that 1WineDude.com readers are smarter, sexier, more talented, and better-looking than I am, I figured that it was better to throw this out to the collective hive mind to solve than to run with it on my own.

So… Leave a comment, Pimp My Cellar, and win some gear! 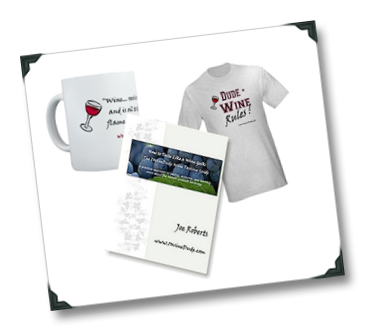